Spider Mythology and Lore
A+ A A- 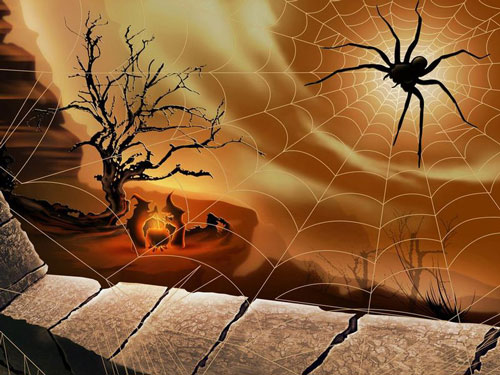 I’ve been walking in my neighborhood lately and have been admiring all of the Halloween decorations set about in people’s yards. There are, of course, Jack- O’-Lanterns, ghosts, witches on broomsticks, piles of gourds on porches, bats, and spiders in webs and hanging from trees. Spider visited with me much this summer, so what better venue to explore her meanings than this time of year when she is welcomed in the windows, yards and on the porches of neighborhood homes.

There are many depictions of Spider in myth. The most recognizable and the one from which the class of arthropods spiders are named for, arachnid, from the Greek myth of Athena and Arachne and their infamous weaving contest. Arachne was a talented young peasant girl who Athena herself tutored in the art of weaving. It had been said that nymphs would abandon their play in the forests just to come and watch Arachne’s lithe arms and nimble fingers work the shuttles and threads. As the girl’s talent and skill grew, so did her pride. Someone once commented that her skill rivaled that of Athena and that she must be one of her pupils. In her arrogance, Arachne denied that Athena had ever taught her and even boasted that she was the better weaver. She put forth a challenge to Athena.

When Athena heard this she was distressed so she came to Arachne disguised as an old woman offering her a chance to redeem herself from her haughty words. She told Arachne that with age comes experience and she invited her to acknowledge the goddess superiority. “Seek all the fame you will among mortal men, but yield place to the goddess.” (Athena to Arachne. Ovid, Metamorphoses 6.30) All Arachne saw in the disguised goddess was an unknown old woman and she scoffed at her. “It is too long life that is your bane… Why does your goddess avoid a contest with me?” (Arachne to the disguised Athena. Ovid, Metamorphoses 6.37)

Athena then revealed herself and the contest began. Both wove with speed and artful skill. In her tapestry, Athena depicted the gods in their splendor. She also wove scenes of mortals who had offended the gods and the consequences they suffered. She edged her tapestry with olive leaves and branches which to this day, are symbols of peace.

Arachne also wove depictions of the gods, but not in their glory. She wove their lustful seductions of mortal women. She exposed their weaknesses and folly. Her tapestry was framed with flowers and ivy.

When the tapestries were finished, all could see that each one was a masterpiece. No one could find any flaws. Athena was angered by the themes in Arachne’s tapestry and she tore it to shreds. She beat Arachne about the head with her shuttle. Arachne, shamed, hung herself in an attempt at suicide. Athena took pity on the girl and did not let her die. Instead, she turned Arachne into a spider so she could live, but continue to hang from the ceiling and weave. In this way, spiders were born into the world. 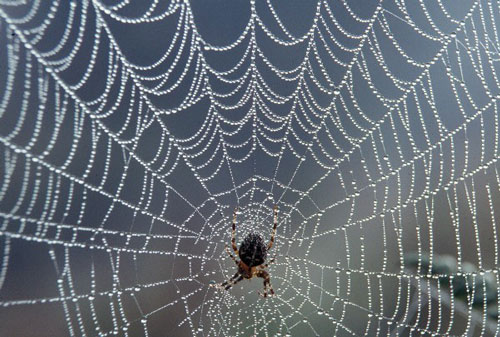 In Navajo mythology, the People were taught how to weave by Spider Woman. Today, many Navajo weavers will rub their hands in spider webs in order to absorb the skill and wisdom of Spider Woman before they sit at their looms. Grandmother Spider is said to have created the universe. She wove her web and when it was laced with dew, she flung it into the air and the dew became the stars in the sky. Each day as she re-weaves her web, she re-weaves creation and life. Other Native American myths tell of how Grandmother Spider brought fire and the sun to the People. Further, Grandmother Spider is known as the “Keeper of Words.” As she wove her web, she brought writing to the People.

Robert the Bruce, King of Scots from 1306-1329, learned a valuable lesson from Spider. After losing many battles and sore from war and toil, he hid in a cave for some rest. He was down-hearted and lacked hope. While there, he observed a spider as she went about weaving her web. She’d spin her silk and jump to attach it to the next spot and she’d fall. Repeatedly she would try and fail. Robert began to identify with the spider because of all the times he’d engaged the king of England and been beaten. Still the spider labored on and finally, she succeeded. This victory for the spider encouraged Robert the Bruce and gave him hope. He went on to gather his troops, win in battle and secure the independence of Scotland from England. Allegedly, this is where the saying, “If you don’t succeed, try, try again” came from.

In some cultures, the spider is portrayed negatively. In some eastern cultures the spider is seen as a trickster. Maya, the Hindu Goddess, means weaver of illusion and is associated with the spider.

Spiders have found their way into nursery rhymes and superstition in more recent times. I found the following on a website, spiderzrule.com:

Other lore from the site includes: 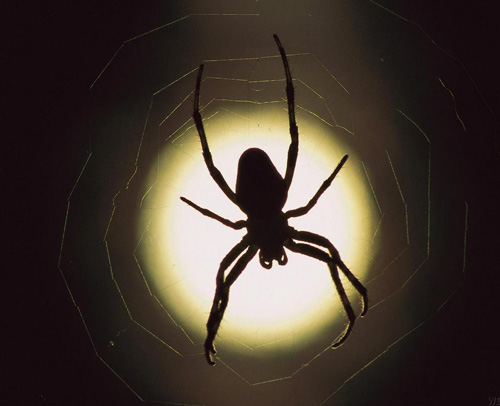 Spiders are arthropods: arthro->joint, pod->foot. As above, they are arachnids. Arachnids are a class of arthropods with a duo-sectioned body, the head/ thorax, which are fused, and the abdomen. Unlike insects, they have eight legs and pincers around their mouths with which they inject venom into their prey. Most spiders spin round webs, resembling wheels. They re-spin their webs every day just as Grandmother Spider re-spins the universe and life every day. After they spin their webs, they lie in wait for their prey. They are very agile creatures, able to balance themselves on the thinnest silk thread they spin.

When we look at a spider’s web, we see that it is circular, resembling a spiral and/or a wheel. In the study of symbols, the circle represents infinity, the universe, the All. In Egyptian Hieroglyphics, the spiral represents the process of creation and is a symbol of cosmic energy. The wheel represents the wheel of life, the wheel of the year, cycles of life waxing and waning, giving birth and dying, and giving birth again.

The number eight has also been associated with spiders. They have eight legs and their duo-sectioned body resembles the numeral eight. The number eight laid on its side is the infinity symbol. Eight in numerology represents patience, perseverance, goals and earthy wisdom.

Or, are we being deceived, by our own selves, or by others? What is our truth, my truth? Do we need to set new goals and work towards them, or reaffirm goals that have already been set? Spider was with me a lot this summer. As I was painting my house, I had a clean brush that I’d brush the spiders out of their crevices with. Not ten minutes later, if I hadn’t painted there yet, the spiders would be back.

This summer we opened a new nursing unit at the hospital where I work. Before we opened I was touring the unit with one of the pharmacists. We went into a patient lounge area and there on the window were three spiders, a sign of new beginnings. New beginnings for the hospital, and a new beginning for me.

Perhaps the closest you’ll get to a spider this season is the one in a neighbor’s window or a plastic one that someone sneaks into your lunch as a Halloween joke. Pay attention, though. Spider speaks softly, but has much to teach.

Is Consciousness a Mental Illness?
Become a Patron!