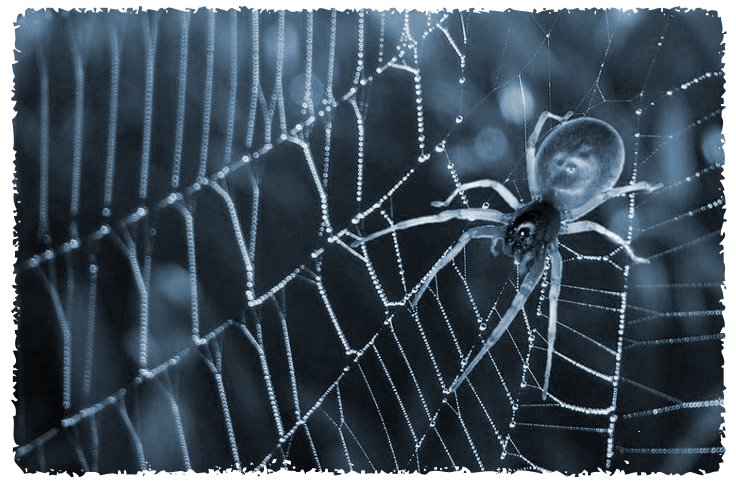 "In the beginning, there was the dark purple light at the dawn of being. Spider Woman spun a line to form the east, west, north, and south. Breath entered man at the time of the yellow light. At the time of the red light, man proudly faced his creator. Spider Woman used the clay of the earth, red, yellow, white, and black, to create people. To each she attached a thread of her web which came from the doorway at the top of her head. This thread was the gift of creative wisdom. Three times she sent a great flood to destroy those who had forgotten the gift of her thread. Those who remembered floated to the new world and climbed to safety through the Sipapu Pole the womb of Mother Earth."

Many Native American tribes have Creation stories that include Grandmother Spider as the Creator who spun the Web of Physical Life. It is upon the glistening strands of this Web that all life is interconnected, with each creature being (two-legged, four legged, winged or creepy-crawly), Standing Person (tree), Stone Person, and all other forms of life, a vital and integral strand in this most beautiful and sacred Web. 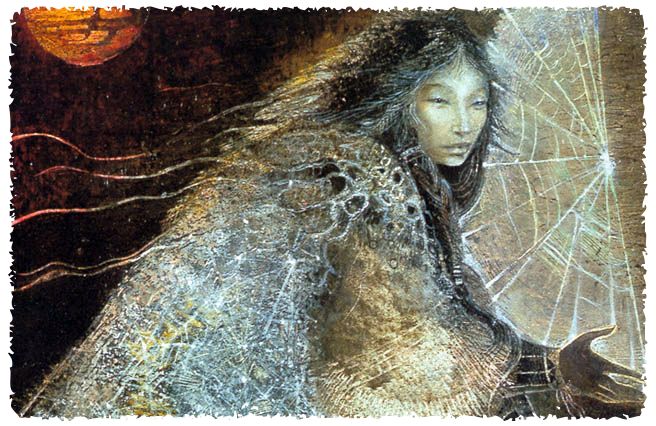 To watch the Spider weave her web is to behold a beautiful artisan crafting a masterpiece of art. The intricate yet interwoven strands are paradoxically complex yet simple, bespeaking of an innate understanding that each Individual fiber is crucial to the balance and completion of the Whole.

What is more stunning than to walk upon a Web unexpectedly as it glistens in the center of a primordial forest, or to see the threads of the same web after a spring shower, tiny raindrops of water caught in the web and glittering as though thousands of tiny diamonds have been left behind, scattered carelessly by the sun. Such creativity is breathtaking to behold, a testament in miniature to the Creativity of the Great Spirit and the loving guidance of the Earth Mother.

For the two-legged beside whom Spider crawls, there will exist a depth of creativity that may manifest in any of a myriad of ways. Perhaps the talent is in writing prose that conveys depth of feeling and spirituality, or it may be the human counterpart is particularly skilled at creating beautiful and intricate jewelry that will often have an etheric quality to them, much like glimmering strands of a spider’s web.

Whatever channel this creativity flows through, it is a quality and gift that must be expressed and allowed the freedom to flow. If creativity is not acknowledged in the Spider individual, then a very necessary and integral part of their Life’s Purpose is being denied.

Such creativity is divinely inspired and a Gift that is given by the Great Mystery. The paradox in this for the Spider individual may be that they will deny an awareness of their own creativity for many years in deference to other areas of their lives which seem to call for attention. Often, the area that distracts the Spider soul most often is that of relationships as much like Grandmother Spider was forever aware of her Children, so the two-legged with this creature being as a Totem will tend to focus much of their attention on loved ones rather than nurturing and fulfilling their own needs. Yet if the Spider Soul does not give license to this creative spark, it will feel as though their life’s blood is slowly ebbing away or they are being "drained" of energy.

For the parent who has a young spider, all effort must be taken to encourage the child to develop their own individuality. Whatever form the Spider exhibits their proclivity for creative genius, that creativity ought to be enthusiastically encouraged, for this will be teaching the sensitive soul the importance of self-love and self-nurturing, while simultaneously gifting the World with the remarkable beauty these souls have come onto the Wheel to share.

As an adult, it is important that Spider Soul indulge in creativity. If the Spider is one of your Primary Totems (Power, Theme or Mission), and you are not currently aware or recognizing of the fact that you possess creative talent, it is crucial to discover the buried talent and give it wings with which to fly. In so doing, the Soul is in greater alignment to the Purpose and Beauty of the individual Life Path. 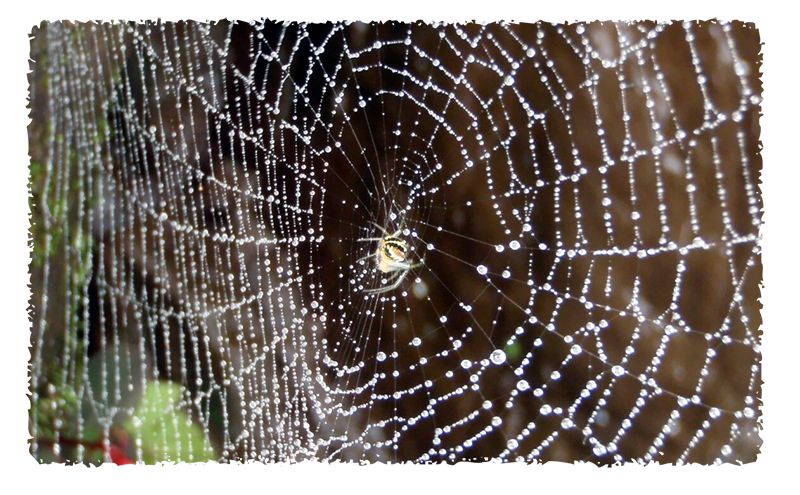 Another area in which Spider has been recognized as being a Creative Force, is in communication of all forms. The Senneca People believe that Spider created the first alphabet of the Two-Leggeds so that we could leave a written history of our travel, lessons learned and progress made on this walk around the Wheel of Life. Following is a recounting of the story behind the creation of that alphabet.

“Spider wove the web that brought humans the first picture of the alphabet.

The letters were part of the angles of her web.

Deer asked Spider what she was weaving and why all the lines looked like symbols.

Spider replied, "Why Deer, it is time for Earth’s children to learn to make records of their progress in their Earthwalk."

Deer answered Spider, "But they already have pictures that show through symbols the stories of their experiences."

"Yes" Spider said, "But Earth’s children are growing more complex, and their future generations will need to know more.

The ones to come won’t remember how to read the petroglyphs."

When Spider is present as a Primary Totem, she will bring with her a gift of communication. Most often, this skill is conveyed via the written word, rather than orally delivered, as Spider Souls can be quite shy, though they are capable of weaving beautiful words in the form of poetry or fiction (think of a Spider spinning its web), that can leave the reader spellbound and enraptured.

If this talent is not obviously present, it has likely been repressed during early childhood. If this is the case, concentrated effort will need to be taken in resurrecting this suppressed talent, as part of what any Spider Soul is here to do, is to convey profound insight and wisdom via the written word. Again, this can be paradoxical, as often times the one beside whom Spider walks will be rather oblivious as to the true power of his/her words and ability to elicit strong emotions.

Parents and loved ones of Spider Souls should take great pains to encourage their child, spouse, or loved one, to explore writing. As sensual beings, the Spider individual will enjoy being given a special journal or book with textured paper, or a special pen with which they can jot down their thoughts, dreams, poetry and vivid plot scenarios.

Dreams are also an important area of the Spider's life and they should pay special attention to their dreams. The Dreamweaver is a spider, and often it is through the slumbering hours and astral voyages that the Spider Soul will receive his/her greatest messages and insights. Keeping a special dream journal beside the bed to quickly scribble details of especially vivid dreams prior to having them fade in the morning light, is supremely beneficial to both the spirit and creative spark of the one beside whom Spider crawls. If not a journal kept beside the bed, then a tape recorder in which the dream can be quickly related as a recording, to be transcribed via handwritten or typed format later. 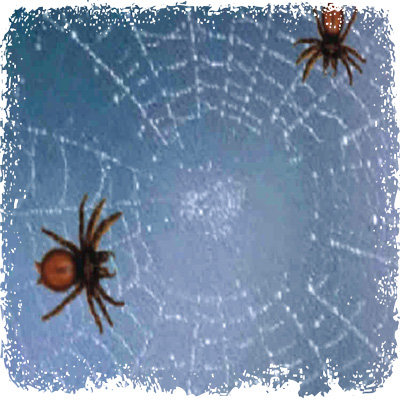 As the Master Weaver, Spider spins a web of stunning intricacy and profound beauty. Such artistry is at the very core of many myths and legends that wind their way across every time and throughout nearly every culture, much like the glimmering strands of Spider’s Web.

In Native American tradition, the Dream Catcher is a representation of Spider’s Web. Upon the arrival of a new infant, a Dream Catcher is placed above the sleeping child, the threads of which are formed from sinew and fashioned in a beautiful flowering that can contain anywhere from five to ten individual “petals” with a small hole at its center. It is believed that the intricate pattern of the strands, attract bad dreams and energies to fall upon them. Once the negative dreams are upon the “web,” they struggle to break free and only further entangle themselves where they will be held until morning when the Sun’s rays will dissolve them. Good dreams and energy meanwhile, are allowed to slip through the center where they will travel along the beads and feathers to fall gently upon the slumbering baby below.

The two-legged beside whom Spider journeys, will possess a certain illusive and mysterious quality that is almost magical in its glamour. Indeed, Illusion in all its forms will be a key theme in the life of the Spider Soul.

Often, some of the most dazzling magicians share the Earthwalk with Spider as a Primary Totem with Spider assisting them in weaving a magic spell that enraptures a willing audience. Likewise, Spider is frequently evident as a Totem in the lives of actors and actresses, poets, basket and blanket weavers and artists of many kinds whose glamour is part illusion, part reality.

When operating from its Lower Vibration, the two-legged is caught in the strands of the personality center wherein unresolved issues that have not been acknowledged and addressed will manifest in a variety of ways. For some Spider individuals operating from this tangled center, lies, omissions and untruths will be spoken and woven with a complexity that is stunning to behold. Not only are these Spider types able to spin lies and half-truths, but they do so in such a skillful manner that others believe them. Only once this tendency to weave tall tales is acknowledged in blatant self-honesty and addressed, may the Higher Vibrations be given life and the Spider individual steps free of the deceitful past into a new light of Conscious Awareness.

Yet for those Spider Souls operating from the higher vibration, the result is watching a master artisan at work. These are the sensitive and nurturing souls that create a beautiful expression and vision that entices Others to reach for the best within themselves. In this way, Spider and Two-legged merge in a mission of bringing beauty and enlightenment to the All.

We have 1095 guests and no members online