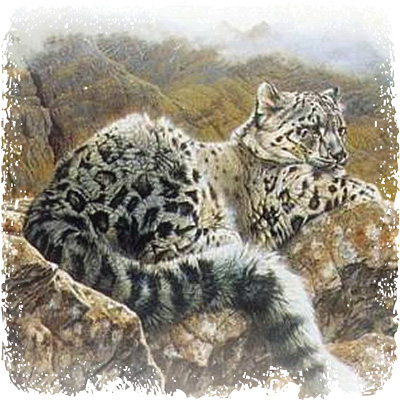 Role: Guide to the Higher Realms

Wind: North Land of the Elders

Snow Leopards (like all members of the Leopard or Panther Family) are solitary creatures that hunt, feed and live mostly alone.  In fact, the only time that a Snow Leopard will interact with another of their kind, is when the female is in estrus, or when she is raising her cubs.  Yet as soon as the female is no longer in estrus, the mating pair will disperse with each going their own way.  Likewise, once the cubs have reached sufficient maturation, they will be driven off by the mother (generally the next Spring, around one year after their birth) to face life on their own, and the she leopard will once more return to her solitary existence.

Snow Leopard Souls are here in part to learn the lesson of Self Reliance.  Like this Totem Spirit that has a mostly solitary life, the Two legged beside whom Snow Leopard strides, will face many encounters and situations in their current incarnation which develop the ability to rely upon and trust the inner Self.

This does not mean that these individuals are devoid of the desire to have a mate, what it does suggest, is that they often do their best thinking and problem resolution alone, and in fact do require some time alone with their own thoughts and feelings.  If this Solitary time is not taken, there is the tendency for the Snow Leopard Soul to feel a stifling of the spirit, which in turn may leave them snappish or short tempered with their mate.

The lessons experienced that assist in the development of Self Reliance, can take many forms, though the most common manifestation is through abandonment as a repetitive issue.  This sense of "rejection" can come in either the form of actual abandonment (as in a partner leaving), or with the physical transition of loved ones.

Regardless of how this manifests itself, the end intent behind these lessons, is to teach Snow Leopard Soul the importance of trusting their inner Self.

Through these lessons in Self Reliance, we are reminded that it is our Inner connection to the Divine that is the true source of our Strength.  Then, in listening to that still, small Voice that speaks volumes to our Soul, we come to realize (through tuning into that Inner Knowing and following its urging) that we will never be led astray, nor are we ever truly Alone.

Understanding the Power of Silence & Mystery

All Leopards are closely linked to Shamans, Medicine Workers and psychics or intuitives, as it is believed that the Leopard Spirit walks effortlessly between the plane of the Physical World and the Blue Road of Spirit.  For the Snow Leopard, this seems even more the case when one considers the breath taking peaks and ranges that this splendid creature calls home.

Snow Leopards live in the high mountains of Central Asia, including the mighty Himalayan Mountains.  For millennia, indigenous Peoples have believed the Mountains to be the home of the Gods. Hence, all animals that live within the embrace of the Great Stone People, are held as sacred brothers and sisters, having a special Role as Messenger between the realm of the Gods and the realm of Man.

How this relates to one with Snow Leopard as one of their Personal Totems is that one beside whom the Leopard walks may possess an inner knowing, reverence and respect for the mysteries of Life, Death and Rebirth.

This attribute is often marked by one whose Theme Totem is Leopard as possessing an aura of mystery or penetrating intensity.  These are the natural born sleuths of the Medicine Wheel, as their keen powers of observation make it difficult for others to keep secrets from them, though they are excellent repositories of secrets untold themselves..  Think here of the light eyes of the Snow Leopard, burning as twin green flames that seem to peer to the very core of one’s Being, yet always in Silence kept.

All members of the Leopard family are known for their stealth and stalking ability.  In fact, Snow Leopard will stalk his/her prey, gliding through the trees and along craggy rocks by stepping on the outside of their paws first, then slowly and carefully distributing their weight upon the rest of the feet.  Walking in this manner, they avoid snapping twigs or leaves underfoot and thus alerting prey to their presence.  Then, once they are within striking range, the Leopard will leap, grabbing the prey animal by the back of the neck and severing the spinal cord, thereby rendering the animal defenseless and in a state of paralysis.

In a two legged, this attribute of stealth is a double edged sword, for when it is translated to the positive manifestation of this energy, a confidence relayed by another is closely kept by these individuals and they are reliable and non-judgmental friends who can always be counted on to keep their silence at the appropriate times.

Yet, the Contrary medicine can be manifested as a ruthless streak in the individual who has not fully integrated the Shadow Side of their nature, thus making a fearsome and vengeful adversary.  Ultimately, when one chooses to operate from Contrary Medicine, there will be an exceedingly high cost to be extracted from such vengeful and ruthless behavior.  Thus, it is wise to make certain that the Contrary Medicine has been integrated so that the true beauty of Snow Leopard’s silence and mystery may manifest.

There are several genetic features of the Snow Leopard that gives them an excellent sense of balance.  The primary feature is their thick, long tail which is heavy enough to act as an appropriate counterbalance when needed, with the length of the tail usually equaling the length of the body from tip of nose to the base of the spine.

Another key feature to their physiology are their large paws that are webbed.  These large, splayed paws act as snowshoes during the long winter months and allow the Snow Leopard to move quickly across the surface of the snow.  This particular physical feature, coupled with their lengthy and weighted tail, assists them in keeping balance on ice covered terrain or slick rock surfaces.

In those moments when the Snow Leopard Soul is experiencing great emotional turmoil, the sense of everything feeling off center may be nearly debilitating.  These are the moments when it is important for the one beside whom Snow Leopard walks to call upon the Medicine of this Animal Ally, and request that he/she walk beside them in Balance and Confidence.  It may help as well to visualize Leopard leaping gracefully from rock to rock, or from slippery rocks to secure perches, always maintaining his/her balance and stability.  In so doing, this Totem Spirit is being recognized & honored for his/her Role beside you on this walk around the Sacred Hoop, and the Two legged also finds the Center of Calm and Balance that is the Eye within the Storm.

Understanding the Shadow Within

The snow Leopard is an animal that has elicited much thought and speculation over the centuries.  Standing as a mysterious and solitary figure, he glimmers from the center of myths, legends and ancient wisdom as a spectral figure dancing between the play of shadows and beams of light.

This beautiful animal treads as softly through our imagination as she does along the pathways and jagged peaks of her Himalayan home.  A ghostly embodiment of the dichotomy that is ever present in our Human Nature whilst in flesh, she sounds the call to lead us toward the integration between Personality and Soul, Shadow and Light, Unconsciousness and Conscious Awareness.

One need look no further than to the stunning coat of the Snow Leopard to see this principle reflected.  The primary color of the coat ranges from creamy white for most of these big cats, to a light tan.  This base coat of creamy white is then overlaid with black rings and rosettes.

While the dark rosettes and rings represent the dark realm of the Unconscious and our fear motivated impulses, the light base coat reflects the promise of light to be discovered in Conscious Awareness that is attained through acknowledgment and integration.

For the Two legged beside whom Snow Leopard walks, what may at first appear as a conflict or set of extremes, may later be seen as a merging of two polar opposites, that when harmoniously conjoined, creates its own magical and mysterious energy that some philosophies refer to as the Yin/Yang principle.  The key in this instance is the removal of those things which are counter-productive or harmful for the soul’s growth, after the lessons that they represent have been thoroughly acknowledged, learned and absorbed.  There is a tremendous surge of energy that is created when the Soul has truly integrated a lesson, one that is often felt even upon the physical plane as an “ah-ha” or click.

There exists within the Snow Leopard Soul a tremendous reservoir of inner strength, determination and the awareness of the Shadow Self, which they will face with quiet determination and perseverance.  Equally, they are able to see both the shadow and the light of Others, a skill that can assist those who are not offended by their penetrating insight.

For one who draws this Totem to them, truth, honesty & integrity are cornerstones of their fundamental being.