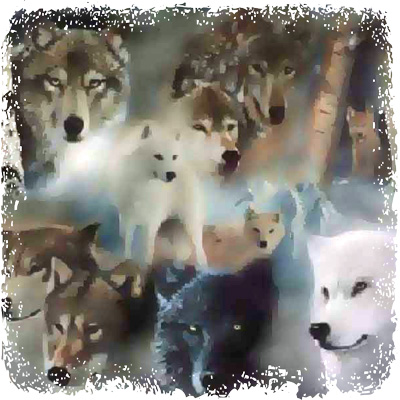 The Wolf cries her haunting song of Life's Refrain,
echoing across the planes of time and space.
I honor you dear Sister, and embrace the lessons that you
have come to teach.  Whisper them now
to me in my sleep.

Shed your Wisdom and Amber Light, upon the dark corridors
of my human mind, so that I too might reach that shore,
the shores of Time Unbound.

Where white sands glitter like crystals captured in the moon`s
gentle rays, refracting rainbows that illuminate Souls Unchained
with Knowledge and Wisdom gained, in walking through
Experience`s Flames . . .
I honor you.

How long has human kind looked into the golden eyes of the Wolf and wondered what inner Knowledge ignites the fire that glows from the depths of those mysterious eyes?

He walks quietly through the world, slipping like a shimmering mist through the forest of ancient trees, gathering Knowledge, attaining Wisdom forged in the fires of Experience so that he might return again to the Pack and Teach all that he has come to know.

Within Wolf Totem, there are three sub-species to consider, they are . . . Gray Wolf, Red Wolf and Arctic Wolf (and its shadow - Black Wolf).  Each of the three sub-species share the common role of Teacher as well as several other keywords, however, they also possess their own medicine as well, unique to each type.

The Wolf is the Soul that leaves the comfort and familiarity of the Pack, to travel out into the world of the unknown.

In her Quest for Knowledge, she begins her journey by setting off South, and it is here that she is schooled in the classroom of trial and error as she dances her way through the flames of experience.

This is the Direction of the Personality Center, learning to trust herself and her own keen intuition which has been forged through confronting both external obstacles, and her own fears.  Thus, a sense of self-reliance is cultivated as she puts to test the lessons she has learned.

Then, from deep within, comes the stirring recognition that there must be more, and she is once again off on her journey, headed this time toward the West.  Here, she embarks on the Journey Within as this is the Direction of the Great Mystery, or the Spirit Center.

In the West she finds that the labor of her actions have borne fruit as she strives to integrate the Personality Center with the Spirit Center.  She contemplates here, in silent reverie, on all that has gone before.   This is the time of moonlight, and as she gazes at the image of herself in the shimmering water of her soul`s reflection, her whole being is awash in the glow of joy that comes from the recognition that life is magical and that, having absorbed her lessons, she has received a Spiritual Rebirth.  She then arises from the ashes of the old, as a new and enlightened being.

Then, she turns her face toward the North and when she arrives there discovers a sense of new found courage gained through resolve and determination.

She reawakens to the physical state of her being in the process of integrating Physical with Personality and Spirit.  The recognition is made that one is also a physical creature, though the Spirit is the force that sustains the physical life.  It is here that a time of thanksgiving and celebration is had for all that the Great Spirit has given, and for the experiences which have gone before.

Yet the East now beckons her as she listens to the haunting cries of her Pack and turns her noble head toward Home.

When she returns to the Pack, the Knowledge gained from her journey, ignites her Being, as a lantern from within.  The Pack draws near to her listening for the Wisdom she will impart, as her destiny is to share what she has learned with the rest of the Pack so that the leap across the planes can be made by All.  This is the Path of the Teacher.

Wolf Totem understands that the unity of the Pack is crucial to his survival, yet the Pack likewise recognizes the vital contribution that each Wolf makes.

Wolves live in highly complex social structures called "Packs" with a dominant Male and Female pair, or the Alpha Male and Female, leading the Pack.  Every other member not only has a "ranking" within the pack, from Beta through Omega, they also have a unique role.  It is this very structure which may have been behind Rudyard Kipling`s eloquent quote:

The two legged with the Wolf as his/her Totem has an inner need to be of service for the "greater good."  Although the individual with Wolf Totem enjoys the company of others, there exists as well, the need for time alone.  This "lone wolf" time will be spent in quiet contemplation and reflection upon the experiences of life before translating these thoughts to form and rejoining the "Pack" once more.