Enlightenment - Card of the Month - October 2019 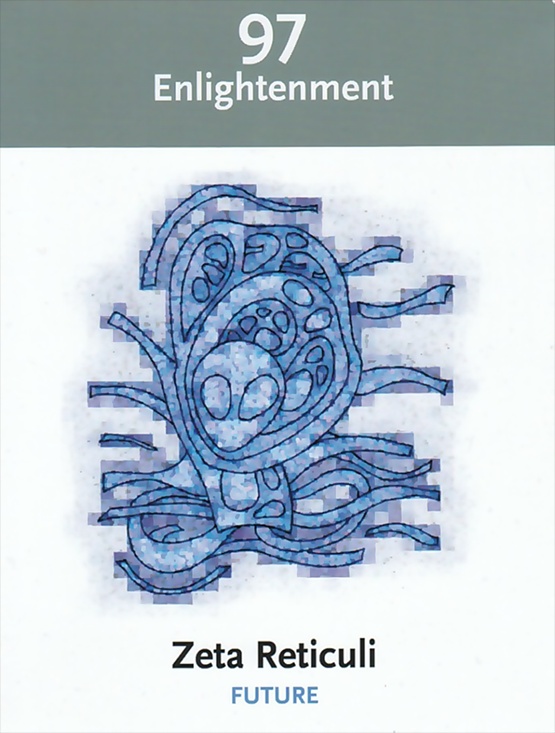 Most of you remember the history of the Zetas. As part of the Vegan lineage, they split themselves off and became a distinct race that prided itself on the development of the mental body and the conquering of the emotional body. As evolution progressed, they experienced a species crisis due to this dramatic split of two vital aspects that must be experienced by physical beings – learning to navigate the mental and emotional bodies with balance. During this species crisis, they reached out to humans (primarily from the 20th century) to help them learn about emotions and integrate their emotional bodies. Once they began integrating themselves and healing the pain of their split, they began to see the importance of emotions as a necessary experience on the road to evolution and awakening. This path, however, was for them an intense one to navigate.

The energy of this card represents the Zetas from the third era – the era in which the species has awakened and is experiencing its last phases of physicality. Their energy is very appropriate for this time in human evolution, because while humans are not experiencing the exact same type of crisis the Zetas did, they are experiencing their own crisis of polarization.

On Earth now, a significant portion of the mass consciousness is clinging to polarized beliefs. These belief systems generate manufactured stories that project polarized energy onto others or societal systems. It is like entering a complex maze and not being able to find the exit because the maze continually generates more dead-end pathways. Belief systems that are projected outward create an increasingly intricate and distracting maze that traps people. They cannot ever free themselves until they see that they are the ones generating the polarized stories despite believing they are broadcasting “facts”. At this level of polarization and external projection, the human nervous system becomes involved – to the point where surrendering one’s polarized beliefs feels like one’s survival is threatened. The nervous system lashes out in order to protect the domain of the ego’s beliefs, and that includes using the intellect to rationalize and defend the beliefs. This is why you see so much vitriol and aggression on your social media. Social media is a really good mirror to see what is happening within the subconscious of your species. Right now, metaphorical warning lights are blinking. Your collective consciousness is reaching a nexus point that requires a shift in consciousness in order to change the direction of the trajectory.

The Zetas also reached this nexus point in their species crisis. What was the key to their shift? The key was that they began to recognize their own beliefs and projections. They began to circumvent the habitual and unconscious reactions that happen when confronted with a reality that they do not prefer. They began to see their resistance to change and to take responsibility for it. They began to see, without judgment, how complicit they have been in the creation of their own crisis. As their eyes opened, the metaphorical maze began to dissolve and they began to feel comfortable resting in a point of paradox – a place in consciousness where all viewpoints are seen in a neutral way without clinging to any of them. Eventually, the strength of their nonpolarized and integrated consciousness led to their enlightenment.

The road the Zetas have taken in their healing process is now an important one for humanity, and this is part of the gift they return to you. They remind you that the reality you see “out there” is a reflection of your consciousnesses and it can be no other way, for the universe is a mirror. The source of all things that disturb you can be found within you. Only there, in the depths of your consciousness, can the world be healed. Your enlightenment as individuals and as a species will unfold as this Truth begins to be embraced. You can start today by looking within to find the source of the thing that causes you the most pain “out there” in the world. The answer might not come quickly but if you keep looking sincerely, it will be revealed in the right time. Your inner landscape eventually reveals all your inner truths when you search patiently.

As the Zetas did, let yourselves explore these hidden corners of consciousness – the places that you never want to see or embrace. This journey eventually leads to only one place – the awakening of your consciousness and what the ancients called Enlightenment.

www.lyssaroyal.net | www.solischool.org
For more information about the card meanings, go to Lyssa's YouTube channel here
Lyssa Royal Holt has been a seminar leader, channel, and author since 1985. She is the co-director, with her husband Ronald Holt, of Seed of Life Institute LLC and the SOLi School, an organization whose primary purpose is to assist individuals to understand the nature of consciousness and to put this understanding into practice in daily life – providing a road map to the process of realizing the true Awareness beyond the human identity.
Source
CrystalWind.ca is free to access and use.
Please donate a small gift of $11.11 or $22.22 or $33.33.
Thank you!
ॐ Namasté - Blessings!

Inspiration for the Week - Need Answers? Connect with your Enlightened State

There is Arcturian Support All Around You ∞The 9D Arcturian Council

Prioritize ~ Teachings of the Masters