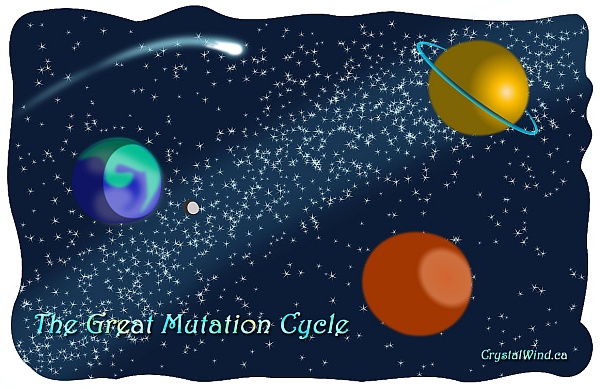 The  great mutation cycles, of Jupiter and Saturn are regarded by Western mundane astrology as the Great Chronocrators, rulers  of the ages. Their recurring 20-year conjunction (synodic cycle) is the basis of three historic cycles.  First, their 20-years synodic cycle corresponds to a focus of social, cultural, and economic developments. Secondly, successive Jupiter/Saturn conjunctions occur in the same element, one complete cycle of three conjunctions, one in each of the three signs of  the element, a 60-year ( synodic cycle). Three 60 year cycles make up the Great Mutation Cycle. The 60-year cycle beginning in the cardinal phase of the element.

The present Mutation cycle is in the element of earth. From 1842 until the year 2020 corresponding to historic themes of structured expansion (a Mutation Conjunction marks the entry of their cycle into a new element). Which will be in the Air element from 2020 for the next 240 years. The year 2020 is not that far away, we are in the last 20 year cycle of the last 60 year cycle of the Great Earth Mutation. Their current sub-cycle transition is from an emphasis on material development since 1842, to an emphasis on global social development - that of ideas, information, communication, and relationships - for the coming 200 years. This emerging development theme will be substantially defined by 2020 (Jupiter/Saturn Mutation Conjunction in Air), and it will continue into the 23rd Century. We are confident we have sound astrological understanding of the market to guide you through this transitional time.

Finally, the Great Cycle of Jupiter/Saturn is 800 - 860 years - it begins with their conjoining in early Aries, and corresponds to fundamental shifts in cultural and economic developments. Having researched the Mutation Cycles, we are confident that we have knowledge of market timing when it comes to the astrology financial cycles.

The Great mutation cycle is a series of Jupiter Saturn conjunctions that follow a pattern of conjuncting in the same element (currently in earth) for a period of 240 years. Known as the Great Mutation Cycle. Saturn and Jupiter makes their synodic cycle every 20-years. recurring in each of the earth signs beginning with the Cardinal earth  sign Capricorn, then the next synodic cycle will begin in the mutable sign of earth Virgo, and the third 20year synodic cycle in the fixed sign Taurus.

Jupiter and Saturn represents fundalmental market psychology as well as shifting prices and market returns. Supply and demand negitave aspects between Jupiter and Saturn affects growth, and a slowing down of the market.

The Great Mutation Cycle is made up of Saturn Jupiter conjuncting  in a 20-year cycle.The 60 year cycle is divided into three sub-cycles of 20 years periods a tidal influence of a rising 10 year period followed by an ebbing 10 year period.

The 60 year cycle also has a tidal pull of a 30 year rising and 30year ebbing periods. The markets falter when the 10 year and 30 year tides turning points happen together roughly every 60 years. 1870, 1930, 1990. 2040. This is the overlying framework where the market trends can be forecasted. Notwithstanding, there are day to day glitches in the market as other planetary cycle enter the picture which influences the market.