In Tribute to Stuart Wilde
A+ A A-

In Tribute to Stuart Wilde

To understand Stuart Wilde, first you have to understand that he was a comedian. Stuart had a brilliant sense of humor, and he could have made it big in stand up comedy. He was offered the opportunity to do so, when he first came to the states in the 80’s. But with Stuart’s vast knowledge of metaphysics, his spiritual journey led him other places. And if you ever had the chance to see him lecture or get to know him as a person, you would understand that a light-hearted sense of humor was simply part of who he was. Stuart was funny. Sometimes he was brash. But so what? Humor rattles loose mental rigidity. Stuart could talk about some of the most serious things, and then a minute later have the crowd crying in tears. He had the healing power of laughter. But it was never just a show. No matter where we went or what we faced, Stuart was quick-witted and always found the humor in this life.

Stuart’s dedication to the spiritual journey was unparalleled. He studied philosophies and spirituality with a teacher that was very disciplined and strict. His teacher would hold meetings in various places around the world, and you were required to be there. There was nothing convenient about it. If the meeting was someplace in Spain next week, you either made it, or you didn’t. The door would lock at the precise time the meeting was to begin, and if you weren’t in the room, you were locked out. You weren’t just out of that particular lecture, you were dropped from the entire course of teachings. Over the years, a thousand or so students came and went. And in the end, there were only three, Stuart, another man, and a woman. The man and woman got married and became successful in other things. Stuart Wilde became the next teacher. The dedication and tenacity of spirit that it actually took is something to be admired.

The foundation of Stuart’s teachings are from a lineage of ancient Daoist philosophies from Old China, known as the 33 Energies of Man. Stuart translated the ancient wisdoms into 33 disciplines and blended the teachings together with the Celtic Myth. The energy is something that one embraces within their own heart, but also enters the earth plane as a dimensional overlay in certain physical locations, like that of Merlin and Camelot. Aligning to the energy of it grants one an expanded consciousness. The Merlin and Camelot energy is an energy moving backwards in time, so Stuart simply called it the Tolemac. Camelot reversed. Stuart translated these ancient wisdoms into something that people could actually use.

And in this way, Stuart Wilde went on to teach that by developing discipline, inner power, and perception, one could create a spiritual reality of their own and transcend the collective human evolutionary path of ego, emotion, and mind, which is often ruled by restriction and dominated by pain. He taught liberation and personal freedom. Stuart was teaching about the invisible fields of control and how to escape them, twenty years before words like “the Matrix” were ever even heard of. He taught about the inner worlds and actually showed people how to experience and perceive those dimensions for themselves, as well as how to be financially independent and successful in life. Stuart’s life was a quest in self-discovery and the liberation of human consciousness, and he had a compassion in sharing his knowledge with others.

Within 30 years, Stuart Wilde wrote twenty books, sixty audio sets of lectures and meditations, six music albums, two films, and over two thousand website articles. He traveled around the world the equivalent of over 100 times, providing lectures, spiritual retreats, and workshops. Stuart reached millions. There isn’t anyone who hasn’t been influenced by his work, whether directly or indirectly. He was the “teacher’s teacher”, and his teachings filtered through others in books, movies, music, and word of mouth. He was one of the most creative and talented people I’ve ever known. There was always another creative idea, always another creative project, and always another thing to do or place to go. That’s who he was. He was a traveler. He was a writer. And he was dedicated and loyal to his readers. One of the most exciting things ever for Stuart was being able to do his own blog, to where he could finally post his writings on his website directly himself. Writing was his passion, and every morning he’d wonder what he could write about to help people next. He cared for people.

Stuart was also an advocate of animal rights, ayahuasca, and sacred plant medicines. He had a reverence for the living force within all things and showed people how to experience and perceive the etheric force and inner worlds by aligning to the spirituality of nature. Stuart experienced many strange phenomena over the years, and he shared his experiences and perceptions of the multidimensional nature of reality, so that others could learn from it. He wanted people to know the truth about life and reality.

Stuart and I spent a lot of time traveling around the world together the past seven years, and we spent a lot of time discussing metaphysics, philosophy, and the strangeness of this mystical journey. We’d talk for hours. But the things that I miss the most about Stuart are things like sneaking out of a gig to have an orange juice in Tuscany, having coffee in Canada, or a pint in an Irish pub, seeing who could eat the most eggs, or sitting at the sacred lake, or just sitting around a well-stoked fire. It’s the simple things that really matter. It’s the time you share with family and friends. And that’s who Stuart was to me.

Stuart Wilde’s main contribution to this world was his energy. Stuart was a light. He was the most kind and generous person. And he offered people a method to evolve, heal, and transcend. He would often say that, “All you ever really need is the Three Graces — Tenderness, Generosity, and Respect”. And he lived it in example. Stuart Wilde may be gone, but he will never be forgotten. His spirit lives on. Eternal, Immortal, Universal, and Infinite. Thus It Has Been Written — So Shall It Be Done. 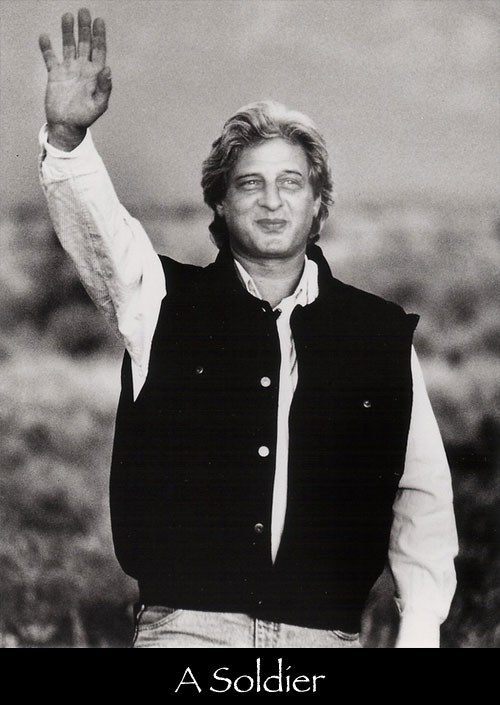 Khris Krepcik is an etheric healer and metaphysical teacher with a lifetime of training in the mystic arts and ancient wisdoms. He is considered to be down to earth, natural, and real—authentic and genuine. With over twenty years in the extensive study of... Read the full Khris Krepcik Bio

back to top
Changing Dynamics of Relationships
Riddle: Is the Truth a Lie?
Onondaga Nation Seeks International Help In Reclaiming Ancestral Lands From US