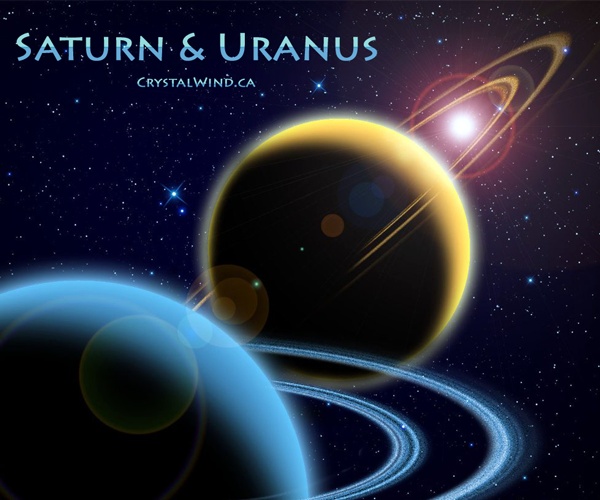 Saturn square Uranus can express positively or negatively. It is merely a turning point in their orbital dance. And yes, it shows a phase when the culmination of the old is challenged by ongoing needs for structural change.

Saturn represents structure and limitations, as well as any sense of fear or enslavement, whether by an idea or a circumstance. Aquarius is a fixed Air sign. Therefore we can expect fixed idea structures to be built at this time. As a planet can operate on many levels of life simultaneously, the structures being built by all of us could be material, emotional, ideological, and/or spiritual.

Again, each planet has its duality of healthy v unhealthy function. Saturn in Aquarius is a position which could lead to a sense of bondage to unhealthy ideological structures, or a sense of purpose in crafting a vision of a greater good for a greater number across time. That’s why the same tide lifts all boats, regardless of the motives of the captains of those boats.

The power of what is being built depends entirely on the diligence of the builder. A dysfunctional fixed ideological structure will persist until it decays due to internal and/or external circumstances. A healthy fixed ideological structure will be a vision which serves a greater purpose, whether to provide the means for future action and thought, or provide a pathway of forms to be implemented until better forms are discovered. Both are being built at this time, but some will last for a long time, while others will quickly fall due to evolutionary necessities.

As I explain in Saturn: Spiritual Master, Spiritual Friend, Saturn and Uranus combine in a “dance of individualization” to help us make our sense of purpose forever new, while giving structure to our process of individualization. Saturn is the boundary of the known, while Uranus is our Eternal Self always stepping out from the known to embrace a new adventure of Self-discovery. They are the means by which we use patience, experience, and understanding to come to Divine Wisdom and a sense we are naturally “doing our Being.”

We began this Saturn/Uranus cycle at their last conjunctions in 1988. That year they conjuncted in February at 30 Sagittarius, in June at 29 Sag, and a final time in October at 28 Sag. Those themes have been the basis of all we’ve gone through involving these planets over the past 33 years. The waxing squares of 1999 featured Saturn/Uranus at 16 Taurus/Aquarius and 14 Taurus/Aquarius, and in 2000 at 21 Taurus/Aquarius marked the first crucial turning points of this cycle, with their oppositions in 2008-2009 from 19 Virgo/Pisces, 21 Virgo/Pisces, and 25 Virgo/Pisces, and in 2010 from 29 Virgo/Pisces and 1 Aries/Libra marked the “far side” of the cycle, setting things into motion currently culminating with the waning square.

Saturn waning square Uranus can be the fulfillment of an old “pulse of individualization,” or the braking action of Saturn resisting any dysfunctional expression of Uranus in the form of willful rebellion, extreme defiance and explosiveness, or an attitude of “I’ll do what I want and you can’t stop me.” Taurus is very fixed, very stubborn, very self-centered with an attitude of “you can’t make me.” Aquarius is very fixed, very stubborn, idealistic and focused on a greater group vision with an attitude of “We’re all going somewhere and you can’t stop us.” These signs are inherently frictional to each other, both are “cool” elements, and one is of the Earth while the other is of the Air.

I’ve been asked if Saturn in Aquarius or Uranus in Taurus represents the violent insurrectionist nationalists. Which planet rules the good guys and which one rules the bad guys? The answer is both represent both, just in different expressions of the square between Aquarius and Taurus.

I described some of the negative traits of Taurus and Aquarius above; it is equally important to honor their good qualities. Taurus is reliable, responsible, pleasant and straightforward. They like it clean, simple, and pleasant. Aquarius thinks of the greatest good, facilitates cooperative efforts, keeps the vision in the forefront, and helps all not to take things personally. Aquarius is progressive thought and action; Taurus anchors and grounds the Aquarian vision and future oriented ideal.

This cycle began at the end of freedom loving, truth seeking Sagittarius. Their waxing squares from 16, 14, and 21 Taurus/Aquarius are now mirrored by this year’s waning squares from 8, 14, and 12 Aquarius/Taurus. This brings an echo of 1999-2000, and completes the fixed friction between these two spiritual heavyweights. In any case, just as we did then, during these squares we need to display good Leo and Scorpio energy to integrate and get the best out of this year’s squares.

Obviously, this transit to transit square will impact us all in different ways, depending on how we respond to these planetary pulses in our lives. In any case, this square challenges us to stay focused on what really matters in situations, and not get distracted or deflected by obsolete, unimportant, or extraneous considerations. It also requires that we learn to recognize and develop new potentials, and move into a more spiritually mature and responsible long view for the process which has brought us to right here, right now.

This square will be with us all year, except for a brief period in September and October, so settle into the general tension, and use the square to “make yourself right” with your Higher Self as you move into a greater awareness and more effective function within a greater Spiritual whole. While this one may entail hard choices and changes from time to time, we can still BE our Higher Self and move in new karmic directions which are perfect for our individualizing Self.