The Moon’s Nodes In Astrology Pt. 2

The Moon’s Nodes In Astrology Pt. 2 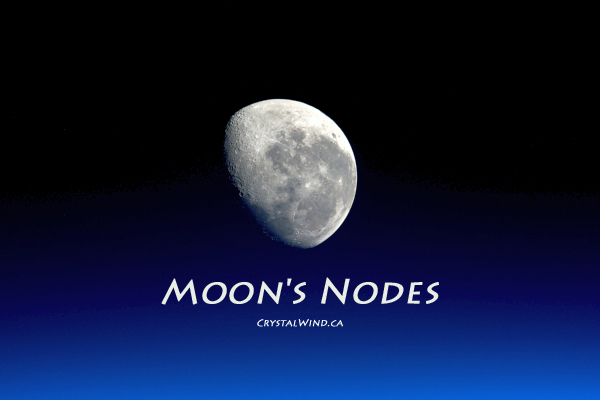 - What They Do and How They Work -

It could be said that often North Node lessons are difficult, because they show us our long term growth, while South Node lessons can be easier, since the South Node shows us what we are familiar with. I'll discuss more ways they work in individual charts in subsequent articles. For now, let's explore their influence in eclipses.

The Nodes are always featured prominently in eclipses. Eclipses bring the Moon, Earth, and Sun into physical alignment, creating a shadow somewhere on Earth, which supposedly shows the fall of old powers, empires, and personalities, allowing for the rise of new ones. On an individual level, eclipses remove elements of our lives where they fall in our charts on the personal, interpersonal, and transpersonal dimensions of human existence.

While we get 13 New and Full Moons each year, usually only 2 of each conjunct the Lunar Nodes. This creates 2 Lunar Eclipses and 2 Solar Eclipses each year. However, every so often there is an anomaly, where we have more than the usual 4.

I’ve noted that when we have sequential Solar or Lunar eclipses month over month, one is strong and one is weak. These are relatively rare occurrences, but as all eclipses are “cosmic recyclers,” they all remove what we no longer need in those areas of our lives.

Since the Lunar Nodes show when eclipses occur, they mark (usually) 4 points in the year when the Sun and Moon bring forth new long term emphases while beginning to shut down old lines of energy and activity. These changes are triggered when subsequent transits make aspects, especially conjunctions, to the Eclipse Sun, Moon, and important planets.

North Node (Rahu in Vedic, or Jyotish astrology) is a magnet drawing you toward the unknown gold mine where you’ll work hard and grow a lot. Though sometimes it's rough and it seems there are few rewards, you’ll learn much through that practice.

South Node (Ketu in Vedic/Jyotish astrology) is a magnet drawing you to what you already know how to do. It is said that the South Node shows us where we have nothing to learn except what to let go of, or what we must demonstrate to our world because we’ve already “been there and done that” so much that there’s only the doing, without learning.

The North Node is often associated with difficulty, because our growth process into a larger unknown often takes us into arenas we need to develop. The South Node shows ease of repetition, and patterns that are already known, where we release and demonstrate skills we could do without thinking. The only thing I've seen developed through South Node experiences are skills expressing the North Node qualities that we demonstrate through the South Node.

Often people feel that following the North Node should be a good or pleasant experience, and dread the supposed manifestations of the South Node, which usually turn out to be a routinized or even ho-hum experience due to its familiarity. However, a "line of greatest development" may lead to forms of hardship and struggle, as it's where we're learning to grow, which sometimes stretches us to the limit.

With the North Node we'll grow whether we want to or not. But regardless of our likes or wants, we have to learn to live the positive manifestations of our North Node sign, since that's a factor in our evolutionary Way this lifetime.

Regarding the South Node, just because it’s familiar and easy does not mean you will feel good about it, or like it, or get good results down the road. It’s just familiar. You’ve done those energies for lifetimes.

Some believe the South Node is a black hole where there is nothing profitable to be found, with lots of wheel spinning but no progress. I don’t agree with that assessment, any more than I do with the North Node being some wonderful flowering energy that leads us to the land of milk and honey. Neither of these is true in my direct experience.

Life and experience are a series of in-breathing and out-breathing exercises in what we do, feel, and think. We take things in, then we release them. Each function is needed in the wholeness of the "circulation" of our Spiritual Pranayama, which we all do whether we are aware of it or not. The Nodes show where we move toward, deepening our connectedness with our Past-Present-Future evolutionary pull, and where we release, demonstrate, or let go of old patterns.

As I hinted at yesterday, it's important to note one big thing about the Nodes from traditional teachings of classical astrology. They are said to be primarily active ONLY when the Moon makes aspects to them. Thus they were not considered important factors in birth charts until recently.

While I believe they are constantly active due to the sheer number of aspects the Moon makes to them each month (both in our charts and the transiting Nodes), they may not function dramatically beyond a constantly fluctuating pull-release, pull-release, with giant steps made after eclipses activate them in long term specific ways.

Because they are integral to understanding how eclipses play out over time, the nodes clearly indicate an “axis of activity” and influence on long-term larger events. Yet as I noted, they are not planets, signs, houses or aspects. They are an axis of the relationship of the Moon to the Earth and Sun. It is within that ever-changing complex interaction that we find their primary influence.

Explore how they push and pull you in the light of how the Moon aspects them in your chart each month to learn more. Also note the Lunations and how they fall relative to your Nodes, since you may see larger 2-to-4 week activity in a clearer light as well.

In the next part in this series, we'll explore some ways to apply meaning to the Nodes in the signs and houses of a chart.

We have 1048 guests and no members online