The New Moon In Aquarius 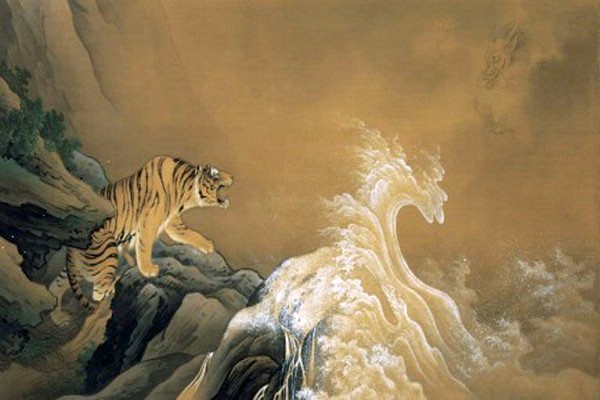 The Aquarius New Moon corresponds with the celebration of the Chinese Lunar New Year. According to the Chinese Astrology pantheon, we are about to enter the year of the Water Tiger. One may wonders what sort of impact this may have on our western astrological calendar where both Jupiter and Neptune are currently stirring up the waters in their own sign of Pisces. One interesting fact I discovered while looking for images for this week’s post is that tigers love to swim! And so might we all want to perfect our swimming skills for the foreseeable future!

On Tuesday, February 1st (or January 31st depending on where you live), we have a New Moon in Aquarius at 12º Aquarius 20’. The sign Aquarius is ruled by two planets: its traditional ruler, Saturn; and its modern ruling planet Uranus. The New Moon on Tuesday is deeply entangled with both, conjunct Saturn and square Uranus. This reactivates a transit that has dominated the astrological landscape for much of last year. It appears they are not yet finished. The Saturn/Uranus square is a contest between the old and the new; or what we are accustomed to vs. the new and untried.

Saturn and Uranus certainly seem to be antithetical to one another: Saturn makes the rules and Uranus breaks them; Saturn labels things, upholds traditions and consolidates foundations. Uranus challenges the status quo, and rebels against authority and control. Without Saturn we would not have the structures that we depend and rely on. While without Uranus we would get stuck and would not evolve and grow. We need both. And if we are needing more security in our lives, Uranus with its unbridled and unpredictable energy, will be seen as a threat. And if we have outgrown our current circumstances and are feeling stuck, or have been putting up with a situation in order to not rock the boat, Saturn could feel oppressive.

You may wonder how two planets that seem so opposed to one another can both rule the same sign. Significant to the sign of Aquarius is the capacity to grow and evolve within the current existing structures. It’s not a matter of destroying the current zeitgeist so much as recognizing the need for things to evolve. It is a sign that sees the value of traditions and the role that they have in our current society, while also recognizing that you don’t always have to keep doing things the way we have in the past, and that there might be better or easier ways to do things. Through the Saturn/Uranus square over the past year many of us were confronted with the question: What are we most needing to save and conserve? and What are we needing to reform? Note that  they don’t necessarily have to contradict one another.

New Moons are about new beginnings, and the New Moon in Aquarius could be about recommitting to certain obligations or promises we have already made, even in the face of changing and evolving circumstances in our lives. Or it can be about recognizing the need for some sort of change that will allow us to further grow and evolve. It could also be about both happening at the same time, where we pursue the changes that will bring us the ability to grow, while still honoring our previous commitments and obligations.

And so as we celebrate the New Moon in Aquarius, we might want to ask ourselves yet again:

What am I most needing to protect in the face of uncertainty and instability? In what ways do you feel like your position, status, or health is bing threatened? What needs protecting, conserving, or is needing to be restored?

What changes do I need to make in order to be able to further grow or evolve? Do you feel stuck? Do you feel unable to fully express yourself? What old rules, limits, habits, or perspectives are no longer working and need to be changed?

What can you no longer put up with? Are there circumstances in your life that are feeling too confining, too controlled, burdened or oppressive? Is there something you can do about it? And if you can’t do anything now, can you create a plan or a timeline that will allow you to make changes in the future?

What changes am I obligated to adjust to? Has something changed in your life that you are needing to adapt to? How can you maintain a sense of normalcy and maturity, and even personal agency, even in times of change and uncertainty?

Before the New Moon on Tuesday, Venus will station direct this weekend while trine the planet Uranus, daring us to open up to new avenues of exploration. New connections made and doors opening allow us to move in a new and exciting direction. Just wait till the Jupiter/Uranus sextile next month to fulfill the promise of this Venus station.

Mercury is also slowing down for its direct station on February 3rd. But as it does so it leaves no rock from the dark lair of Pluto unturned. Because Mercury appears to be at a standstill, it will conjunct Pluto for 3 weeks, rather than the usual few days. That’s a really long time to have Pluto lurking around the dusty corners of our minds, sowing suspicion and foreboding. Things are unearthed from the past, and old demons come to haunt us in this weather. All the more so while it’s still retrograde.

But Mercury/Pluto is also about discovery! Turning over all those stones can unearth the denizens of the deep, but can also uncover gemstones of incomparable value. What Mercury/Pluto weather can be really good for is doing research or getting to the bottom of a problem or an issue. It brings focus, intense concentration and profound insight, as it strives to solve mysteries, and uncover that which had been hidden.

New Moons are times of new beginnings, and as such are ripe for setting intentions, creating some sort of plan, or recharging ourselves with affirmations. If you wish to set intentions or make affirmations with the New Moon, do so after the New Moon and up until the Crescent Moon the following Friday. The New Moon occurs on January 31st, at 9:45 PM on the Pacific Coast of the US, and at 12:45 AM on February 1st in Eastern Standard Time, 5:45 AM Universal or Greenwich Time.

Today is the first day of the rest of my life. May I choose to live it truly and authentically.

“Tiger against Dragon” by Hashimoto Gaho