Lucifer the Fallen Angel
A+ A A- 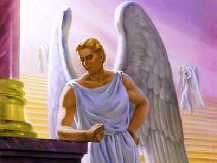 That later was translated to "Eosphorus" (Greek word for Morning Star) and finally to Lucifer. In mythology he is the son of Aurora (the Roman personification of dawn) and the father Ceyx (Greek). Contrary to popular belief, Satan and Lucifer are two separate fallen angels. His banishment was because of his complete egotism and pure malice -- his sin, pride. This then indicates that Lucifer, not Satan was indeed the first angel to have sinned. Lucifer has been equated to Satan due to the misreading of the passage Isaiah 14:12 that was applied to the King of Babylon --

..."How you are fallen from heaven, O Lucifer, son of the morning! How you are cut down to the ground, You who weakened the nations! ...

First concept of this passage is that is was a mention to a man, a king who ruled the city of Babylon on that time.

The second concept is that it was also a reference to Samael, a cosmic being and the Seraphim of Purity, who descended from Heaven to oversee Hell.

The Isaiah's passage, as far as it is related to Lucifer (and in this case it is originally to Samael) is actually a lament when the "Son of the Dawn", the brightest Light from Heaven descend from his former position of Seraphim of Purity to rule also over the Underworld (Sheol) and Hell and oversee the punishment of the iniquitous.

The fact is that Samael descended, **he did not fall**. The lament is that when a being of his height and light had to descend from his original place in Heaven to work for God in Hell, shook the nations! Samael is also the sovereign of the 5th, 6th and 7th Heavens.

The actual name "Devil" was applied to Lucifer when early theologians identified him with the falling star in the passage from Isaiah, hence how Satan and Lucifer started to become interchangeable. We must point out here that writers of that time, did not know of fallen angels yet, through some passages point to the behavior of angels as less than "holly" from time to time throughout the Old Testament. 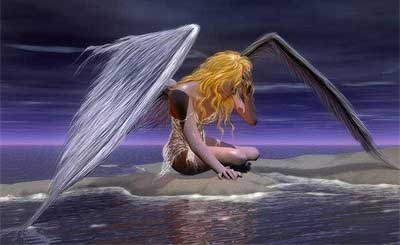 Lucifer was a "great" Archangel, Prince, and the anointed Cherub (7th Dimension - Cherubim). Ever after his fall he still seems to retain some of his power and ancient title. There are many different variations of stories and legends on Lucifer.

Is Lucifer the opposite of God?

Lucifer cannot be God's opposite because he was created by God.

Lucifer is the opposite of Michael. (the Head Archangel) 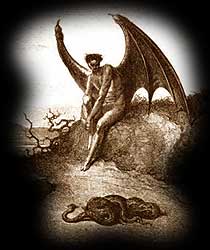 Satan's name is believed to originate from the term satan which connotes the idea of opposition and adversary.

Before his fall, it's believed that he was one of the Ruling Prince's of the Celestial Orders (specifically Seraphim, Cherubim, Powers, and Archangels), chief of the Seraphim and Head of the Order of Virtues.

St. Thomas Aquinas had a different important point on this matter, he believed that Satan was a Cherubim more than anything else...

Instead of being depicted as a six winged Seraphim, he was shown as having twelve wings. It has also been written by theologians that Satan was created on the 6th day of Creation. Representing more of an abstract entity than an evil one. He was in charge of testing "humans integrity", though God had the power to set limits on what Satan could and could not do.

The traditional theory is that Satan was the angel that betrayed and then led the revolt against God. It boils down to Satan that he was very jealous of the love that God felt towards Adam. Either by transforming into a snake or just using the snake as a tool, Satan tempted Eve with the fruit of the Tree of Knowledge. By 3rd century A.D. it was fully established by the Christian philosopher Origenis the association between the snake and Satan. In following centuries, the snake has been believed to be the incarnation of Satan. God then banished Satan from the Heavens... or did he? He banished him to Earth, but the working theory is that Hell is actually located within the Northern boundaries of the 3rd Heaven. Within the 2nd Heaven the fallen angels are imprisoned awaiting final judgment in complete darkness.

So it's here that Satan walks between Heaven and Earth. Primary staying here on Earth, seeking to destroy the lives of human beings and to keep them separated from God. Here is when Satan is now known by his other name, the Devil.

First New Moon of the Decade

Urgent Message - Are You Hearing The Call? - Auroras & Oraphims

No More Tolerating, Settling, and Compromising

3 Steps to Deepen Your Mindfulness Practice