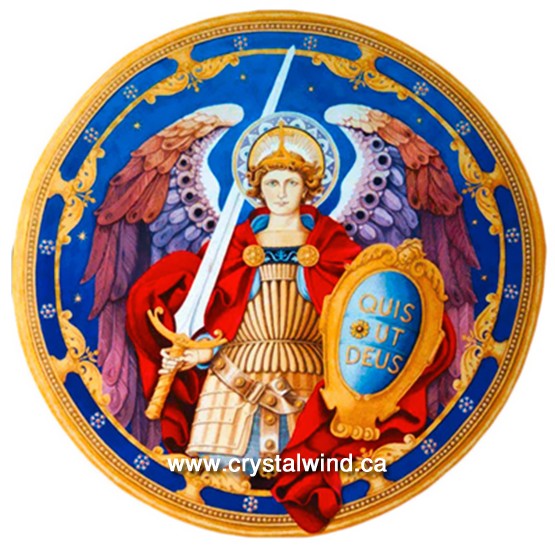 The Archangel Michael is working to uplift earth's energy and to make the way clear for the Golden Epoch. He is seen thrusting his sword down the throat of a dragon or standing on Lucifer's head with his foot or holding the scales of justice; weighing human souls, after each life experience guiding them to another world or plane of existence.

There are many that honor and celebrate St. Michael's Day on September 29th. Michael the Archangel was given the appointment of standing on the right hand of God as Lucifer was on the left. With this separation, began the universal law of free will and free choice. With his sword he is an angelic warrior who is the Commander of the Holy Army of Light to uplift the galactic realms into new positions and to assist earth in overcoming darkness and negativity and to make way for all souls that are ready for a world of peace.

Through the use of many spiritual tools and techniques Michael teaches you to walk and confront the many challenges that are encountered every day. With his gentle teachings and humor we are exposed to a greater perspective of ourselves, as well as understanding past experiences and even events yet to come. This is a part of a greater spiritual plan to up-lift souls to a higher earth frequency causing a harmonic evolution of new and exciting challenges. The Archangel Michael is here assisting souls to attain self-mastery and is providing an understanding of your spiritual gifts through mind, power and will. This is to help facilitate souls that are ready to advance to a higher purpose for the coming graduations and the ultimate ascension.

Michael (September 29) -- The name of this Archangel means "who is like unto God?" In the Old Covenant he is made known to us as the "great prince," the protector of the children of Israel (Daniel 12, 1). Through the New Testament the Church continues this patronage of Michael (Revelation 12, 7) and has always venerated him as the guardian angel of the kingdom of Christ on earth, as the heavenly leader in the fight against all enemies of God. For this reason he was the special patron of Christian soldiers fighting against pagan armies. In the fierce battles of the imperial troops against the heathen Magyars in Bavaria (933 and 955) Saint Michael's help was invoked by all fighters with prayer and song and battle cry, and the victory was gratefully attributed to him.

His feast, originally combined with the remembrance of all angels, had been celebrated in Rome from the early centuries on September 29. The Synod of Mainz (813) introduced it into all the countries of the Carolingian Empire and prescribed its celebration as a public holiday. All through medieval times Saint Michael's Day was kept as a great religious feast (in France even up to the last century) and one of the annual holiday seasons as well. The churches of the Greek Rite keep the feast on November 8, and a second festival on September 6. In France the apparition of the Archangel at Mont-Saint-Michel is commemorated on October 16. Another apparition, on Mount Gargano in Apulia, Italy, is honored by a memorial feast in the whole Western Church on May 8.

Some scholars, ignorant of the history of religious feasts, have claimed that the Church introduced the custom of building Saint Michael's churches on hilltops in order to replace the pagan cult shrines of the god Woden with Christian sanctuaries, thus "christianizing" the ancient Woden cult. Actually, the custom came from the Eastern Church (where nobody had knowledge of the Woden cult) long before the conversion of the Germanic tribes. From the early centuries it had been a favorite practice in the Oriental Church to build Saint Michael shrines on the tops of mountains and hills.

The great Archangel is not only protector of the Christians on earth but of those in purgatory as well. He assists the dying, accompanies the souls to their private judgment, brings them to purgatory, and afterward presents them to God at their entrance into Heaven. Thus he is the actual patron of the holy souls. As Satan is "ruler" in hell so Michael is the "governor" of Heaven (Praepositus Paradisi) according to ancient books. The Church expresses this patronage in her liturgy. In the Offertory prayer of the Requiem Masses she prays:

Saint Michael's protection over holy souls is also the reason for dedicating cemetery chapels to him. All over Europe thousands of such chapels bear his name. It was the custom in past centuries to offer a Mass every week in honor of the Archangel and in favour of the departed ones in these mortuary chapels.

Among the Basques in northern Spain, whose national patron is Saint Michael, the feast is kept with great religious and civic celebrations. An image of the Archangel is brought from the national shrine to all churches of Navarre for a short "visit" each year, to be honoured and venerated by the faithful in their home towns.

The Feast of Saint Michael coincides with the ancient "quarter" celebration of the Germanic nations, held at the end of a three-month season. It was the time of the fall meeting (Thing) of all freemen for the purpose of making laws and sitting in court. Great markets and celebrations were held in all cities and towns. Some of this ancient lore has come down to our time: Saint Michael's parades, Michael's fairs, Michael's plays, and similar customs.

In some sections of Europe, especially in the north and in England, wine consumed on this day was called "Saint Michael's Love" (Michelsminne). In Denmark the drinking of Saint Michael's wine on September 29 has been preserved as a popular custom to the present day.

We have 3619 guests and no members online