All Is Love, All Is Peace - Messages From Montague 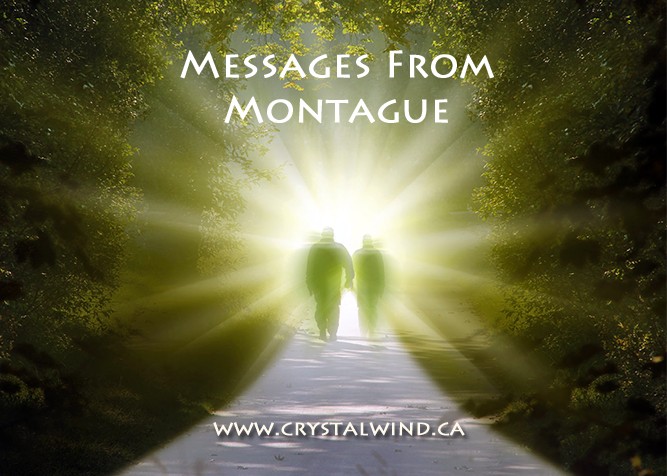 If only you could see what is happening on Earth at this time. Humanity fears what the Cabal will do. Those in the Cabal fear what people will do to them when they finally open their eyes to who they are. The Cabal has always used humanity's fear of death as a weapon against them. It is an irrational fear perpetrated by the Cabal itself. You know how happy I was to be able to report from this side of life in my own voice, just how wonderful it is here. GLORIOUS was the word I used. I told you that if humanity had any idea just how wonderful it is, people would be queueing up to come over. You have nothing to fear. Death releases you from all the trials and tribulations of Earthly existence. Do not allow the fear instigated by the Cabal and religion make you afraid to pass over. You will simply step from one state of being into another. You leave all the problems of life on Earth behind you and you are whole again.

Do not be taken in by those who want World War 3. That is the only way they can hang on to control. Look at the fear in their faces as they try to convince you that they speak the truth. Their call to war gets ever louder and more desperate.

Ireland has only ever fought for its freedom and independence from England. Now you see it totally in the hands of the Cabal. It does not hide this fact. Until the men and women of Ireland find their voice, they are doomed to extinction. The whole island of Ireland needs to be protected. It has never been in such danger. Your government does not serve you. It has involved Ireland in many dark and dangerous activities. Wake up, Ireland, before it is too late, and you are completely sold down the river. Did all the 1916 Men of Ireland die in vain? Are there no men left with respect for their country? You are standing by, allowing that SACRED ISLE to be defiled. I have great love for Ireland and I considered myself to be an Honorary Irishman. It is heart-breaking to see it destroyed.

Mr Trump continues to upset the Cabal, yet their controlled Press and TV Channels have failed to bring him down. Their plans to assassinate him have been exposed and he refuses to play their game. He is a brave man. Pray for his protection, as you need him, no matter what country you happen to live in. You need a man of his courage when all hell breaks loose. You do not have long to wait, for the process has already begun. The only way the Cabal can delay it, is to start another war. I have reminded you many times that nothing is as it seems. You have been under their control for so long that you fail to recognise the truth when you see it.

The Cabal has clones. They never put themselves in danger. I ensured that Veronica watched a YouTube video which revealed how easy it is to produce these clones. Babies are produced without any input from a man or a woman. These soul-less beings are used against humanity. You are only just beginning to learn what is being done to you, and by whom. This year of 2018, all will come into public view. You will not be allowed to close your eyes to it. It has to be faced and dealt with. This is your big awakening. There are good people in your world who do all they can to wake you up, but they cannot force you to do so. They put their own lives at risk to save you. The Cabal has used TV to be the policeman in your living room. It controls your lives. When did you last seek the truth on any subject, or do you rely on the TV and newspapers instead? Stop being a robot which blindly accepts all that you are told. It is time you learned to respect yourself.

Do not look to any religion to protect you. I can assure you that it cannot. It is all based on lies. Lies that have held you captive and in fear, under their control. All this will be exposed in the next few months as their time is up. Then you will see them in their true light and it will shock you. You will have no choice. You will have to face facts. Your silence and compliance have allowed them to destroy humanity, you even do their killing for them. Facts must be faced, it is time to wake up. Reach out to each other and share knowledge, for there is strength in numbers. Come out of your little boxes of religion and race, and work together to defeat your enemy. Do not sit back in the hope that someone else will do it for you. This is your fight. Be brave and take whatever steps are necessary to free yourselves.

Take great care of your children. Protect them from Satanic Ritual Abuse. This abuse has been kept well hidden for many years but it is now being exposed. When your controllers are desperate, they use many more children. They believe that drinking their blood and eating their flesh will give them increased strength. You only have to look at the Church of Rome which uses these satanic rituals at every Mass. YOU ARE INVITED TO DRINK THE BLOOD AND EAT THE FLESH AND YOU WILLINGLY DO SO. YOU ARE ACTUALLY CELEBRATING A SATANIC RITUAL. You have been fooled. The God of Love would never condone such an evil practice. You have been conned to accept it.

When you pass to spirit, ALL IS LOVE, ALL IS PEACE. Then it becomes clear to you what was done to you on Earth to create havoc in your life. When you are brave enough to allow love into your life and you live by it, it changes everything. You see everything in a different light. Life becomes so much easier. It opens up so much.

Some of you have written to Dave, or shown concern, or have reached out to someone in need by offering kind words. This is how life on Earth should be. I thank you on his behalf.

You will face big challenges this year. You must be prepared to see all that you trusted in the past, exposed as evil and corrupt. You will not be allowed to close your eyes to it. It will affect everyone on Earth. Nothing can save you from it, for it is ordained that this should be so. The black holes have been destroyed so there is no escape for the Cabal. Many of their underground shelters have also been destroyed. They did not expect this, so they were not prepared. They never expected failure, or to be trapped on Earth. Their fate is in your hands.

My dear, please rest when possible. You can only cope with so much stress. There is light at the end of the tunnel.

Dave has asked me to let you know how important your letters are to him. He thanks you. He will be 51 years old on the 5 April. It gives him strength to know that there are people who care what happens to him.

A man was found hanging in the jail yesterday. Please pray for him. Dave was very disturbed by it. Fresno Jail is a very dark place. There is very dark energy there. Thank you for your kindness. It helps him to survive.