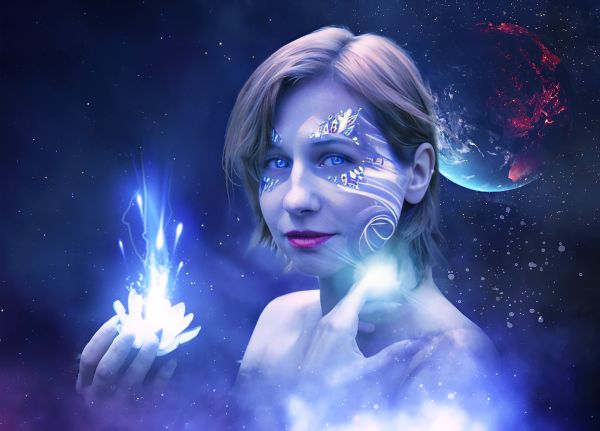 The full moon of January 7, 2023: The old layer of illusion is cracking at the seams, it shows many leaks. When the shell of hardening can no longer support the new energy, it breaks open and the original light being comes out and enters a whole new zone.

Your inner light was enveloped in the hard shell of illusion, affecting many perceptions. Following your inner voice became difficult and unreliable. For a very long-time man kept this old, hardened shell, it served as a kind of protection. The program of dominance took advantage of this and weaved many threads of confusion and the inner light dwindled.

By now you have converted this old shell into a new form, because a kind of ethereal layer has emerged in which the new light being could grow and the layer of hardening changed into softness. Now the rebirth can take place in the resonances of the new age. The hardening turned into a fragile shell that enveloped and nourished the light being like an ethereal egg, so that the star seed and the inner light merged.

The many battles you had to fight to grow this living light were not easy and often too heavy to bear. Help came from a world where the living light of love was propelled. This world of light is now approaching and your inner light now shines more powerfully than ever.

A new fire of rebirth is now burning in the core of the earth. This fire breaks out through everything and touches the old shell of hardening. The old, reduced form no longer fits and dissolves. It's time to step out with your light and show your true nature. This new being of light is so different from the old flame from back then. It is many times more powerful and as pure as crystal, be aware of this new light and trust it.

You Can Now Start Working With Your Original Light Potential.

SEEDS OF LIGHT AND THE ETHERIC EGG

For a very long time the seeds of light have been placed in the hearts of men. Much has happened and more will happen. It is an unusual time and the confusion is increasing, but those who can now follow their inner voice clearly know where the path of renewal lies. They can open and close the etheric egg if necessary, this shell gives them new possibilities. They can inspire others through this ethereal light and so the enlightened DNA is passed on in all layers of the collective consciousness.

The rebirth takes place in the earth consciousness. A healthy civilization carries many different kinds of intelligences. Many talents and gifts can resonate with each other and become intertwined, so that recognition and complementation arise. There will be no more jealousy, for everyone follows their own original light. Uncertainty about who you are will disappear and your light being will be embraced.

PORTAL OF SELF REALIZATION

For those who want to reach a higher consciousness, the portal of self-realization is opened. Many universal experiences penetrate the mind of the imaginal. Everything is possible and the abundance will flow in a special way. Replace the old thought about spirituality and science, because these are outdated. A totally new concept of connection is being established.

The scientific consciousness will expand the gaze to the cosmos and recognize the feeling of the emotional intelligence. There will be "evidence" for the magical world and that will give a great leap forward in recognizing it: "Extraterrestrial life in cooperation with the inner light on earth".

In politics, a new light is shining worldwide, everything breaks open and the old system is exposed. What will the political powers restore in this confusion of total visibility? Their image will be put in jeopardy when the elections start.

These three cannot do without each other and complement each other through the higher consciousness. Those born with this combination of abilities are now waking up and understanding why they are here. These people carry a very high light and are not understood in today's world of programming. They were made invisible and this higher gift was locked. Intelligence from the gifted part works differently from those who are highly intelligent. Highly intelligent people can work in the artificial program, they carry out what they are told.

The gifted have difficulty with the system in which they grow up, their cleverness has to contend with a highly sensitive nervous system and they can also look multidimensionally. They come up with many separate solutions, which are not appreciated. Many misdiagnoses in regular care arise from ignorance.

They are passionate, fast, creative, driven, intense, empathetic, fair and sometimes too honest: which can make them seem blunt. Their quick way of thinking is not accepted, it interferes with the artificial program of box thinking. They don't fit in any box, or rather: "In all boxes at once." Their way of communicating is misinterpreted. They are misunderstood and unloved. The psychological suffering is mainly caused by rejection from society. They want so much to connect, to love and to be understood. Their urge to save the world is great. Isolation is the result of all this and they become invisible. Adaptation becomes their survival mechanism and they no longer know who they really are.

The gifted person is born with a higher consciousness, but in education they are often not stimulated in their gifts. They are dropped into an artificial program where everything works the other way around. They get stuck in social functioning and cannot use their speed. They suffer from burnouts, boreouts and depression. They are the dropouts at school, who often do not get their diplomas because boredom is lurking. Regular education does not suit them and they are often labeled as stupid, which causes them to underachieve.

Many untruths now emerge from a deeper layer and are quickly cleared, allowing the inner being of light to mature further. The unborn DNA of light grows and changes. It opens that which was always dormant.

When the new being of light no longer fits into this reduced form, the shell breaks open. The rebirth of enlightenment sometimes arises in one fell swoop but can also come to them in steps. The light then opens in phases. A completely different energy is felt and it bubbles up. The magnetic field is stimulated, which can cause tingling, vibrations and small electric shocks.

"Follow the Light that Resonates with the New Being of Light".

Digital light is too limited for this new living DNA. Many children are distracted and raised to work with the digital light. It will numb their minds until the new being of light opens up within them. The shell breaks open and suddenly they remember why they are here and what they have to do. They rise to embrace the new living light. They do need the support of their environment and do not reject them, because in the old world a lot of misunderstanding can come their way.

Whoever You Are, Dear One: 'You have come to Earth for a Reason and your Light Consciousness can now Begin to Unfold'.

I salute the Light in your heart

Ashtar is a consciousness with a very intelligent ability, contactees include George van Tassel, Tuella and many others.
Ashtar is an ethereal light being, a loving intelligence and he consists of pure Light and works with the healing Rainbow colors. From a wave of love I have to meet Ashtar. This revelation of the Light opened my cosmic consciousness. When this happens  then he opens the veils. The true memory who you really are comes to above. Once man was a beautiful being with a lot of Light power and special talents. The memory of an Earthly Paradise is no fantasy and is hidden deep in the heart of everyone. A very intense desire now arises to reunite all of this into wholeness again. ©Arthura
Source

© 2023 crystalwind.ca. All rights reserved. We track all IP addresses with sniffer technology. Using a Proxy/VPN will not hide your IP address.

We have 984 guests and no members online