The Winter of My Discontent 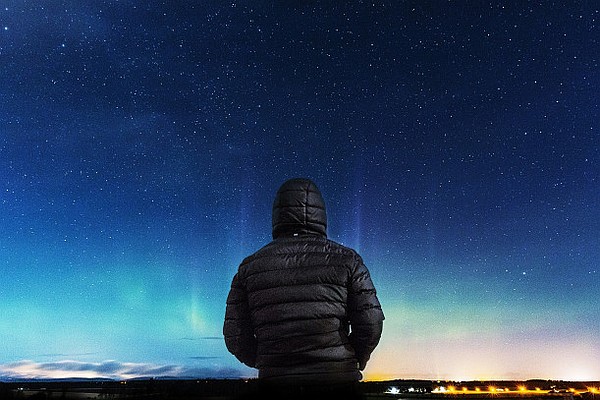 I was looking up at an endless Minnesota night sky. I had never seen so many stars in my entire life. The clear subzero whether made that possible. It was mid-1970s  and the Midwest experienced average winter temperatures dipping down to minus 40°F.

I was duly bundled up in layers of clothing to prevent hypothermia. The landscape resembled something you would see on a Christmas card. Starry sky, and sparkly snow. If you could get past the tundra-like cold, it was quite beautiful.

The starkness was a perfect reflection of how I was feeling. It was an existentially lonely moment in my life.

I had traveled over 1000 miles with a young man I befriended in college. Looking back, I honestly believed I was fleeing my past.  Getting away from a caustic relationship with my father.  But in that unmercifully cold moment, I realized that I could escape mom and dad, but I couldn’t run away from myself.

Dennis and I drove from New Jersey to Iron River, Wisconsin in early summer.  We rented a small cottage in the woods along with another couple.  Neighbors were quite a distance, and we were shrouded in nature.  It was not unusual to see bears and coyotes fairly regularly.

We were going to just stay the summer, but Dennis thought it would be fun to see if we could settle down in the Midwest.   Jobs weren’t easy to come by in that neck of the woods.  We both did our best to find work.  I took a job at the local fishing pole factory, wrapping wire onto Heddon fishing rods, to the tune of Maggie May piped out of the P.A. system.

Back then factories weren’t required to comply with health codes, so their idea of adequate ventilation was keeping the side door open and running some oscillating fans.

Consequently, for eight hours a day, forty hours a week we were inhaling chemicals, like solvent-based glue.  Glue was literally everywhere.  On the assembly line tables, on the floor, on our skin, in our hair and on our clothes.

After work each day, a group of us would spend time at the local bar, drinking beer, eating their home-made soup, and playing pool.  After awhile I got quite proficient, and even purchased my own collapsable cue stick.  There weren’t many places to hang out in that part of rural Wisconsin.

I tasted my first venison, which were hunted, prepared and frozen by our room-mate.  It was a little too gamey for me.

Meanwhile, Dennis got an offer from a cable T.V. Station in Ashland, Wisconsin, to be a camera man.  His background was in photography, and he was an excellent technician.  The offer was too good to turn down, so we moved to Ashland.

I will admit, I was resentful because even though I also had a creative background, and graduated as an art major, there didn’t seem to be similar opportunities for me.  Our relationship brought out the worst in me at times.  It seemed to highlight my insecurities.

But really, I wasn’t an ambitious person, and wasn’t terribly focused on any one thing.  Later I would come to realize that wasn’t a bad thing.

He eventually graduated to doing T.V. Spots on the station, one of which was Mr. Bingo Man.  Daily, he spun the cage of Bingo balls and called out the numbers.  Around town, I became a bit of a celebrity myself.  I was known as Mrs. Bingo Man.

I worked at a nursing home in Ashland, and again, I couldn’t seem to get away from inhaling chemicals.  This one was bleach.  My job was to clean dirty laundry, and before putting them into the washing machines, we did pre-washes in vats of bleach.

One day as I was delivering the freshly laundered linens, I heard the seniors chuckling as a male voice coming from the T.V. said, “Sorry ladies, I just dropped my balls!”

Apparently, as Dennis was spinning the bingo balls, the cage door opened and the little spheres spilled out onto the floor.  He disappeared from camera momentarily as he scooped them up.

Dennis was considered a celebrity, and he earned it.  He was talented, and quite funny when it called for it.  He was also much more focused and ambitious than I was.  Somewhere inside I knew I wasn’t destined to spend my life in or anywhere near Duluth.  Side note:  We lived in Duluth for awhile.

MY WINTER OF DISCONTENT

I was growing more and more discontent as time went on, and as summers and falls rolled into winters.  I wanted to go back home, to New Jersey.  But Dennis was understandably fleshing out a nice career for himself.

Dennis and I had a tumultuous relationship.  We weren’t exactly mature, and were still trying to find ourselves.  Although we did share an intimacy.  Evenings in bed actually ended up in sweet conversations with each other.  He was easy to talk to.  We did have what some would call a unique connection.

But my frustrations were becoming overwhelming, and I probably threatened to leave one time too many.  Even though he always tried to help me see the good side of staying, finally one day Dennis had enough, and said, “O.K…..leave.”

It was, as many relationships can be toward their end, bitter-sweet.  But we both knew it was time for us to part ways, and for me to head back home to New Jersey to see if I could salvage my relationship with my estranged family.

Looking back, I can appreciate how those events and emotions were an external reflection of this whole ascension process.  We all go through that darkness, that winter of our discontent, in order to break through to realizing our freedom.

Although it can be cold, and lonely, there is also a beauty to its landscape.  There is also an intimacy and warmth, something about it that ignites and forever resides in our memory.  It was a shared experience with others who we can place tenderly into our heart’s photo album.