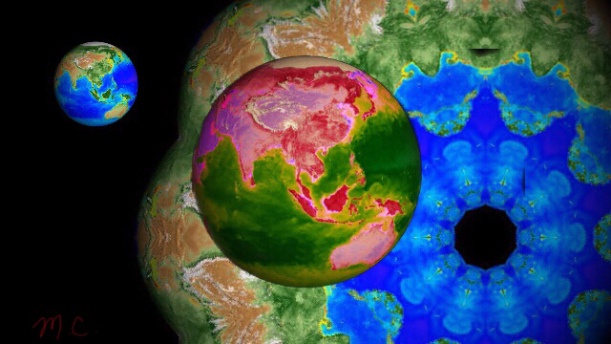 Not only is the Planet experiencing a climate change, global warming, but there is a change of climate on the Planet.

The light coming onto the Earth is felt by all inhabitants here to one degree or another.  But most people recognize it as something is wrong.  Many see it as a world gone mad, as too many conflicting energies, as corruption at the highest levels.  Some New Agers believe it’s the dark forces.  Many religions see it as the End Times, God’s wrath upon us for not following His rules.

Just as the light has been disrupting our bodies, and our personal lives for the past several years, So is that same light having its way with other humans.  It’s bringing up conflicting energies within the body of humanity.

And that’s being played out as we see things coming to light in the news.   Corruption, misogyny, racism, homophobia, xenophobia, are rising to the surface.   It seems people can’t hide.

Their lack of integrity is showing.

The current polarized political, social, cultural and religious climate is just a symptom of the gap growing into an abyss between those who are interested in real change and those who want to remain stuck.

We have seen it in our personal relationships. Those who we once felt on the same page with, we now feel universes apart from.  Attitudes and behaviors we once tolerated from others we can no longer abide.

The idea that spiritual beings are all-loving and accepting can get in the way of the truth of spiritual awakening.   That the awakened human is very discerning.

The awakened human enjoys all kinds of people, and enjoys some idle conversation.  But when it comes to people who are an intimate part of our life, there is not a huge interest in suffering fools.

In fact over time, those types of energy feeders are no longer in our orbit.

One may ask, shouldn’t the light bring people more in harmony with each other?  Instead we are seeing more divisiveness now than any of us can recall in our lives.  From the largest organizations to the most intimate relationships.

Couples are breaking up over political differences.

But that’s because we are seeing that those differences are not just about policies, but about core values.  Those value are being exposed for all to see.  The so-called darker values  especially.  And make no mistake, those values and attributes have always existed.  But they became veiled over time, and even acceptable.

But now, in the light, things hidden are being revealed.

A neighbor of mine, who is from Argentina said that in all her years here in America she rarely felt any discrimination from others because of her origin or color.  But since the current administration took office, she has been experiencing people in stores and other public places eying her with suspicion, moving away from her, and some even refusing to serve her.

She is a woman who always believed in assimilating into the American system, and taught her children her own sense of integrity,

So this was troubling to her.  She had never experienced such open hostility.

And of course we see it between men and women, between heterosexuals and homosexuals, Republicans and Democrats, the Right And Left, Conservatives and Liberals, religious groups, and the list goes on.

Seems like there is a lot going on, but to simplify it, it’s just the galactic story being played out.   Humans externalizing their unresolved emotions onto an enemy.  So it becomes the dark vs. the light, the masculine vs. the feminine.  Good vs. Evil.  And, in more personal ways, the enemy could be their food, scrutinizing everything they eat, or their own physical body.  Believing it is betraying them.

It’s nothing new, really.  But what is New is that it’s heating up.  Global warming is symbolic of a heating up, and a shake-down of the human story.

YOU CAN RUN, BUT YOU CAN’T HIDE

Those who have felt marginalized are angrier than ever.  Even those who have basically all the control and privileges are feeling more  disenfranchised.

A male friend of mine and I were having a conversation about how some whites feel discriminated against, and white cisgender men in particular.   So groups are forming with hate as their hashtag.  My friend said, “I don’t get it!  White people control everything in America.”

As a woman, the irony is certainly not lost on me.  But, I get it.  They are feeling more and more threatened by change, and losing their power and control.

Whatever camp people may find themselves in, they will not be able to hide who they are.  As things heat up there will be a magnifying glass on everyone’s values, and beliefs.

And, here’s the interesting part.  I know you’re going to like this.   And I know you already know this.   There is simply nothing to fear.

Isn’t it fascinating how the whole Fake News phenomenon has taken hold?  Just as intriguing is how fear has been fueled in so many.  A fear that finds expression as anger and rage.  And often violence follows.

Yet, if we look closer, and do some real fact checking, we find that those fears are for the most part unfounded.  Mexicans, Muslims, Blacks, Gays, Lesbians, Gender Fluid, Trans, and women, are not the enemy, and pose no threat. But then, the absence of evidence never stopped the spread of a good conspiracy theory.

But the real threat of course is the idea of change.  Many will have no part of it.

And those who feel the most threatened are protesting the loudest right now.  They try to push against those they deem dangerous to their own freedom.

Even those who embrace a more enlightened, progressive ideology are trying to force change.  Pushing for peace and equality.

It’s a very old, slow way of doing things.  Trying to change everyone else’s minds.  We all know that solid evidence that clearly contradicts their assumptions, is just not going to sway those who hold to their belief in fear and a need for protection.

Each side truly believes their ideology is the right one.

As we awaken and leave that dualistic world behind, we still struggle with it to a degree.  But the conflict is much closer to home, with our mind.  That old, carbon based mind is still trying to coerce us with fake fears.  It’s feeling less and less needed, and it’s afraid it will go out of existence.

But it’s just the byproduct of evolution of consciousness.  There is a climate change within us that is highlighting all the mind’s greatest fears, all coming up and out.

Some believe that the climate change on the Planet is due to humans, and environmental carelessness.  They don’t understand that the Earth is expanding due to the evolutionary process of ascension.

While we are the caretakers of this Earth in terms of keeping her clean and unpolluted, the climate change that is occurring is beyond humanity’s scope. Humans would be better off if they could just allow the Planet to recalibrate herself. To kind of just step out of the way.

Once again, the external is a reflection of the internal.  As we allow without the mind’s interference, this process of expansion, of our soul, our I AM, our Eternal Self, whatever you like to call it, we are also allowing a balance that is the solution to all of humanity’s conflicts.

We become living, breathing examples of how it’s done, from the inside out.

Image by Maria Chambers
© Copyright 2018 Maria Chambers, all rights reserved. Please feel free to share this content with others but maintain the article’s integrity by copying it unaltered and by including the author and source website link: Maria Chambers. source