Energetic Whiplash Symptoms and Solutions
A+ A A- 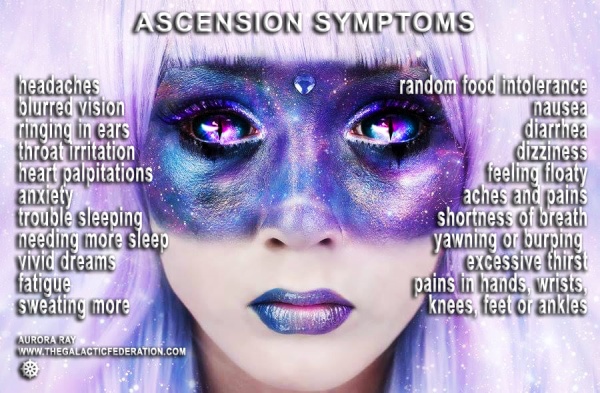 As another Schuhmann resonance update confirms, another wave of 40Hz has hit the earth this week.

The ascension of Earth and humanity is taking place at an accelerated speed.

The Photon Gamma light beams are showering earth star Gaia and preparing all its sentient life for mass ascension.

DNA is being upgraded.

That which our 3D unknowing scientist call "junk DNA" stores information of all of your incarnations, your galactic heritage, and the entire universe. And this knowledge is going to be restored. Can you see now how terrified your world's 'powers-that-soon-were' are of this fact?

Can you understand why the world is upside down? It's all just a distraction. To keep you in fear. Only the low frequency of fear can keep you from adjusting to the vibratory level.

With the rise in frequency the scattered helixes of DNA reconnect. The cosmic rays being sent to earth pierce through the cells of your being and rearrange your DNA.

The 12 helixes of DNA correspond to the 12 chakras within, above, and below the body. They send and receive information back and forth between each other.

As you unlock the chakras and allow the DNA to form itself back to its natural form of 12 helixes active, you are becoming multi-dimensional.

A very long time ago the dark rulers of this planet have manipulated the human DNA, leaving only 2 helixes active. These two helixes correspond with the first and second chakras. The root and the sacral chakra. This was enough for us as a race to survive and procreate.

But the continuous blast of photon gamma light beams to earth in the last years has helped humanity to begin an awakening process that will inevitably lead to ascension.

The solar plexus chakra is unblocked by listening to one's intuition and questioning the narrative. This continues with the heart chakra's opening and being able to give and receive more love.

And thus, the body’s frequency changes to adjust to the new vibratory level of Earth. During this process, you may experience symptoms of discomfort. In fact, most flu epidemics are actually ascension symptoms.

It happens when massive amounts of photon gamma light waves are sent to blast the earth through the central sun but the human receptacle isn't prepared in a sense of fitness, nutrition, and well-being.

Remember, you must love and pamper yourself. Eat well, sleep, rest, and don't follow the 3D fake news that's only meant to send stress into your being.

It is important to connect to nature and ground yourself regularly during this time. Walk with your bare feet daily, lay down with as much naked skin as possible on weeds, sand or take salt baths.

Drink sufficient amounts of water, eat fresh raw plant foods, meditate, breathe, and do things that make you happy like singing, listening to your favorite music, and dancing. All these above-mentioned practices raise your frequency and support your inevitable ascension process.

A new world is being birthed. 5D is here now. Tune in!

Source Here
Aurora Ray lives on the island of Ibiza in Spain, works as a coach and travels regularly through Europe to teach raw food classes and host holistic health events. She's the founder of The Rawvolutionist Academy, an online platform for students from around the world who can't come to her live events. Aurora Ray is the author of "I AM god" (2012), "Longevity Secrets" (2016), and "Rawvolutionist" (2019).

We have 4617 guests and no members online