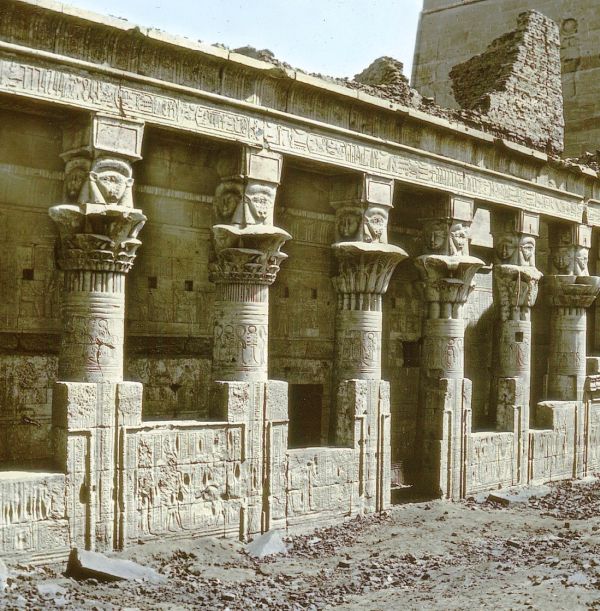 [Reminder: Masculine and Feminine energetics are not gender specific. We all hold both in equal measure as egg and sperm unite to create human form. This is not a story of men or women, but the broader history that we each resolve within because we are all both.]

We are at a powerful time of shift, which is not always easy. Part of this process is balancing the masculine and feminine energetic within.

In late July, early August, I had the feeling of a turning point that is building toward the end of this year. These are an energetic marker that is like a season turning, so I am not talking about a specific date that creates utopia on Earth. We are on a path of evolution.

On August 15, I had a sudden, clear message, “Now we can return to the Lady Moon,” and I instantly knew this had something to do with Ophiuchus, the 13th sign of the Zodiac (sometimes known as Asclepius) that occurs around November 29 to December 17.

As it turns out, there was a Nova explosion in Ophiuchus and the visible light was winding down when I got that message.

The light influx had completed its main saturation.

I’m going to tell you a story that connects to a vision I had back in 2005 as I was doing energy healing with my soul sister. Back then, I called it the turning point, and here we are again, at another turning point.

In this vision I was high above a temple. It was a temple of women, sometimes known as a moon temple.

As I was suddenly observing the eagle’s view from above, I could see and hear women running and screaming throughout this large open area in front of the buildings as they were being attacked.

As I was observing this, I knew this was an ancient turning point, that similar things were happening all over the world. Not in the exact same way or at the exact same time. But I knew a change was occurring.

The patriarchal dominance had begun.

Humanity was shifting into a new era. All over the world, changes would occur that shifted the balance of power to imbalanced masculine energetics, which would also create a feminine energetic imbalance. As I observed this vision in 2005, seeing a turning point in ancient history on display, I also knew that hope was not lost, merely suppressed.

I was shown that all over the world, there would be pockets of people; some tribes, some families, some individuals, some communities, etc., that would hold the balance of masculine/feminine connection. Sometimes it would manifest in ways that people resisted, resented, or hid. But it would remain on Earth.

Energy only moves, it does not go away.

In 2019 I visited Egypt. One of the temples we visited was the Temple of Isis at Philae. It was a temple that had been moved from its original location due to the dam. They take great care to move and rebuild the sites. As a sensitive, you can feel the difference, but there are still echoes of energy there. You can see the layering of timelines etched into the buildings.

As we exited the boat that brought us to the island temple, skiddish and sickly cats scurried away or sat cowering at the edge of the small island. As you walked toward the temple complex, the tall columns enclosed open-air rooms that give the impression of a busy interactions before arriving at the main temple. 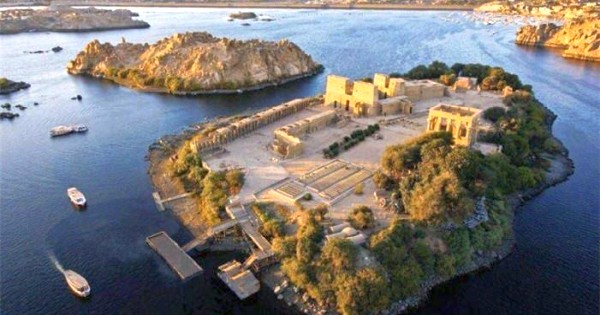 Many of the beautiful columns were topped with Hathor looking in all four directions. Amazing construction spoke of a towering capability that we have not been able to reconcile with current understanding. There was Ramses’ image at war, imprinted into minds at nearly every location so the future doesn’t forget that he, Ramses, was the one with great power.

But that feels so recent. It’s just tagged buildings that had long lost their luster. Assuming the future could only read the surface and not see the immature ego stenciled into history.

There are buildings to the right side, architected gathering areas between the structures, and remnants of buildings that nearly crumble into the water on the left side. I walked behind the temple complex and stood alone at the door of a deteriorated wall that protected nothing. It was only partially re-built and behind this short wall was land that descended into the water.

As I stood there, looking at nothing, I heard a message, “This is where the honeycombs were.” I knew this was where the women lived and worked in their sacred service to the Divine Feminine principle. I didn’t know more than that.

As I walked back to the main temple, the group I was travelling with (I had walked about on my own instead of sitting for a presentation) was now milling about in the main temple. I saw a cat walking up to people and giving cat kisses, where they raise their back and rub against your leg.

As the cat came toward me, I was walking forward slowly and trance-like, listening to the energy of the temple, though it barely spoke. I reached down to pet the cat, just letting my hand touch it as it walked underneath. As the cat was now just behind me, I heard hissing and felt pain. My hand was being attacked; I couldn’t imagine what I had done to upset the cat.

But as a cat lover, I knew not to pull my hand away. That only makes it worse.

So I froze, like time, and let the pain occur.

It only lasted seconds, but felt like an eternity. I walked on, looking at my bleeding hand. These were sick cats, and I only had a bottle of water. I went outside to the temple’s edge and sat to let the water wash over my wounds. It wasn’t too bad. As my blood stained the stones, I realized my group was beginning to board the boat so I stood to leave.

I turned and took one last look, and suddenly I saw it clearly. This was the place, the turning point.

I was once again above it, seeing the layout that was emblazoned on my mind 15 years earlier. The open area, the smaller buildings to the left, the columns, the main temple.

But now, the wound had been reopened.

I heard the frantic screaming, the confusion. I felt so sad that the women in the honeycombs were trapped. I felt so helpless.

Just let the pain occur, because there was nothing that was going to stop this tide.

Yet I also knew, this turning point in time is part of a larger cycle. Life always seeks homeostasis, and this ancient wound is turning a corner.

Now we can return to the Lady Moon.

This same story was echoed in Greece (and elsewhere), time is not chronological. The myth of the heart is not always learned through the book of time.

To understand the connection of Ophiuchus, I reached out to astrologer Alison Dhuana (contact below). Alison works with the Goddess asteroids, among other things. Part of what Alison helped me discover was the connection to bees through the Melissas. Which led me to the Oracle Temple of Delphi.

This Temple of Apollo was not always such. Yet his image is imprinted into minds as he sits on the Goddess throne, the serpent’s head, the umbilical cord that nourished from the flesh of the Mother, now the navel to mark the spot of new life’s connection to Time.

Apollo is the image of calm conqueror, the one for the glory of ages to revere. Such prowess, the battle that others could not win was his to hold.

Apollo sits like Narcissus, admiring himself, for he was the one to slay the dragon, the python, the serpent that protects the knowledge that one must be readied to know.

When ego is hungry, there is no understanding of how to recognize or temper poison, it just greedily eats. Jealousy, blame, resentment and suppression abound. 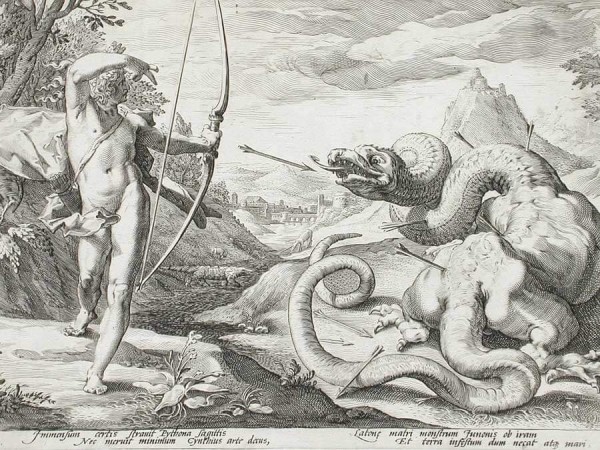 The images of Apollo or Ramses are part of the story that tells of the fall of human kind-ness. Where the balance of action and reaction create wholeness instead of harm. Where harm is syphoned into harmony, pulling the poison so the body of man can or won’t renew into a greater strength than fathered before.

This is not a blame that can be placed on a gender, for we each contain both. It is merely part of the story that Time reveals within our Akash for the future to heal.

The tides of Time are dualities clock. Chronos feared himself through his children, for Time always gives way to destruction. But as the Goddess Gaia knew, she held the Temple that Apollo felled until the tides of time drowned the honeycombs where the bees indwell.

The serpent guides knowledge to spiral up Time’s staircase. Just as your DNA unfolds history into the future’s form.

Akash is invisible, its access points infinite and ever-expanding. For the flowering of life is that Time never stops blooming, no matter who sits upon its throne.

All that is released feeds the future’s consuming, for Time continues, no matter what it consumes.

Recognize and temper poison, for you can not merely take action of avoidance.

You are immersed in the past, yet there is no power of the past that matches the power of Now.

Choose and focus your resonance. Temper the poison that humanity has held within for so long. When done right, not in saturation, it feeds healing.

Love is the remedy that creates more connection. [1313]

Alison Dhuana can be contacted at .

Jamye Price is an energy healer, channel, and teacher. Her unique energy healing modality, Crystalline Soul Healing, along with Light Language—are a powerful transformational experience. She also channels Areon, the Lyran Council of Time, with information focused on the mental and emotional balance of Ascension. Jamye’s work is practical and profound; she mixes highly esoteric subjects into applicable usage for empowered living.