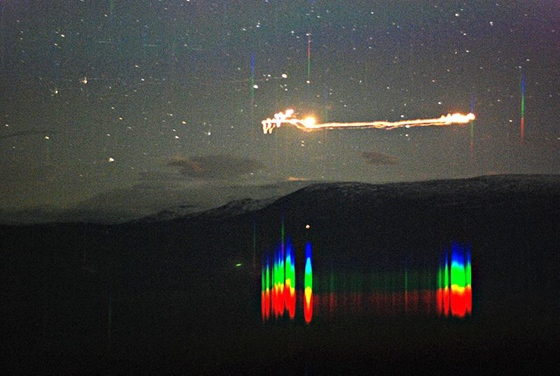 The Hessdalen Lights are a phenomenon usually seen in the Hessdalen valley in the central part of Norway. The mysterious lights, typically large, bright white, blue, red, or yellow lights floating above the ground or shooting at amazing speeds through the air, have been witnessed since 1811 or earlier. Interest in the lights picked up in 1981 when residents in the area began to see unknown lights in the valley and in the nearby districts.  The lights sometimes remain still and sometimes flash, and can suddenly move at extreme speeds up into the atmosphere or down into the ground, or into one of the many lakes in the area.  In addition to lighted orbs, occasionally triangle, pyramid, cylindrical, or oval/disc-shaped objects are reported accompanying the glowing orbs of light. During the early 1980’s, the activity became particularly active with 15 to 20 reports a week. 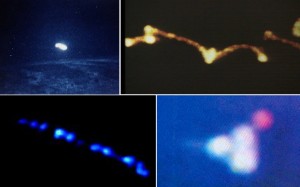 Project Hessdalen uses the witness reports and photographic evidence to classify the lights into four different color patterns. White or blue-white lights flying high in the air are common. Yellow lights with a  red light on top (sometimes the red light is flashing) are also commonly reported. Yellow or white lights are the most common form reported (and often stand motionless for more than an hour). Also reported are a black objects with a lights attached to their surface. Any of these objects have been reported to move around slowly down in the valley, stop sometimes for minutes, and then start moving again.

In addition to classifying the Hessdalen Lights by color, researchers also classify them into one of six different types: Doublet, fireball, plasma ray, dust cloud, flash, and invisible.

Scientists are unsure what causes the lights. Theories range from combustible or ionized dust in the air, flammable crystals enclosed in plasma, to glowing alien extraterrestrial vehicles.  What is certain though, is that the phenomena is real. On January 21, 1984, an extensive field investigation was carried out in the valley by the Ostfold University College.  Forty people were included on the team and 53 sightings were reported during the five-week investigation.  Here are the results that they reported: