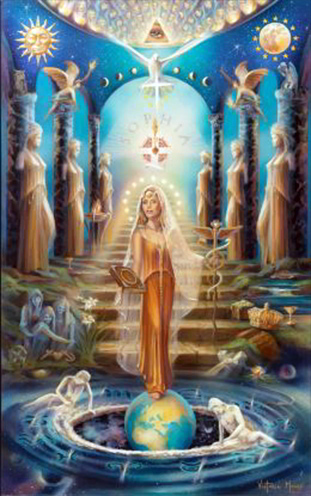 THE MYSTERY SCHOOL OF SOPHIA

Certain artworks explore spiritual concepts and iconography. This is the most complex to date. There are 9 elements and icons woven into this painting of the Goddess, Sophia. Below I discuss the work in general, a list of all 79 can be found via a link at the end of the article to my fine art site.

As the feminine companion to God, Sophia symbolizes the womb of creation which brings forth all life from the sacred marriage of opposing energies: spirit and matter, heaven and earth, intellect and intuition. She holds the caduceus: the winged staff entwined with two serpents. The serpent is an ancient symbol of duality. It is considered both masculine and feminine, solar and lunar, medicinal and poisonous, preserver and destroyer, spiritual and sensual. In addition, the synthesis of opposing energies is represented by the Rosy Cross, from which emerges the sheaf of grain, representing the ultimate revelation of the Mysteries.

On the left of Sophia, the feminine energies are symbolized by the moon and the pool of water. The moon governs the tidal cycles and is associated with the waters of creation. The moon also symbolizes the material realm. As the moon reflects the light of the sun, matter is the reflection of spirit. In addition, the moon illuminates the invisible world which corresponds to the feminine gift of intuition.

On the right of Sophia, the masculine energies are represented by the sun and the element of fire. The sun generates heat and light which sustains all life. The sun also symbolizes the spiritual realm. As the sun generates light, the spiritual realm is composed of pure light. In addition, the sun illuminates the visible world, which corresponds to the masculine characteristic of intellect.

The holy number seven is associated with the four lunar phases and is sacred to Sophia. According to the Book of Proverbs, "Wisdom has built her house; she has hewn out it’s seven pillars." These are known as the Seven Pillars of Wisdom: Arithmetic, Geometry, Astronomy, Grammar, Rhetoric, Dialectic, and Music. The Greek religious temples and philosophical academies were supported by pillars carved in the likeness of women, as the priestesses of the Great Goddess were the original "pillars of the church".

In ancient times, the seven stars of the Pleiades marked the point of the vernal equinox which occurred in the constellation of Taurus. According to the Greeks, the Seven Sisters were a flock of doves, placed in the heavens by Zeus. The leader of the Pleiades was Alcyone, the "halcyon" bird which ensured good weather during the sowing month of Taurus.

Appearing in the form of a dove, Sophia was identified with the Holy Spirit in the Gospels. Accordingly, the Holy Spirit is frequently depicted in religious iconography with seven rays of light emanating from it. These correspond to the seven gifts of the Holy Spirit: Wisdom, Understanding, Counsel, Fortitude, Knowledge, Piety, and Fear of the Lord.

Sophia is also the embodiment of the Many-Named Lunar Goddess, crowned with a halo of twelve stars, which correspond to the twelve months, or moons, of the solar year. Upon her forehead, she wears the symbol of the triple moon. This corresponds to the three visible lunar phases of the Triple Goddess: the Virgin (Waxing Moon), the Mother (Full Moon), and the Crone (Waning Moon). Furthermore, her triple aspect is represented by her three daughters; Faith, Hope, and Charity.

According to the ancients, the Earth is encircled by seven heavens or spheres. Above them is the eighth sphere of the fixed stars. Also, behind the eighth sphere is the heavenly light of the Divine which shines through the crystal sphere and appears as stars. The All-Seeing Eye symbolizes illumination and was originally an emblem of Maat, the Egyptian goddess of justice. She is identified with the Greek goddess Ananke, the Strong Fate, who guides the destiny of the universe and is the Spindle of Necessity upon which all the spheres of heaven revolved.

The two males reclining near the feet of Sophia represent the sacred king and his deputy who each ruled for one half of the year. This corresponds to the Ancient Poetic Theme: the God of the Waxing Year constantly striving against the God of the Waning Year for the love of the Triple Goddess. One male sits near the point of the winter solstice, known as the Gate of the Gods, where the soul ascends upon the solar path to the heavenly realm of spirit. The other male sits near the point of the summer solstice, known as the Gate of Men, where the soul descends upon the lunar path to the physical realm of matter. Both of these cycles harmoniously complement each other as the eternally revolving Wheel of Life, or Zodiac.

The stars around the moon and beneath of dove are five-pointed pentacles. These are associated with the goddess Venus, as her planet forms a five-Pointed star within the circle of the zodiac every eight years. Around the head of Sophia are six-pointed stars which symbolize the union of masculine and feminine energies. To her right is a lily which is her sacred flower and symbolizes both purity and innocence. To her left is a lotus, the Eastern Counterpart to the lily, which also represents enlightenment. Near the locus is a crown, which symbolizes divinity, sovereignty, power, and royalty. Finally, in her right open hand hays a book, the universal symbol of knowledge and wisdom . The ouroboros gracing the cover often represents self-reflectivity or cyclically, in the sense of something constantly re-creating itself, or the eternal return.