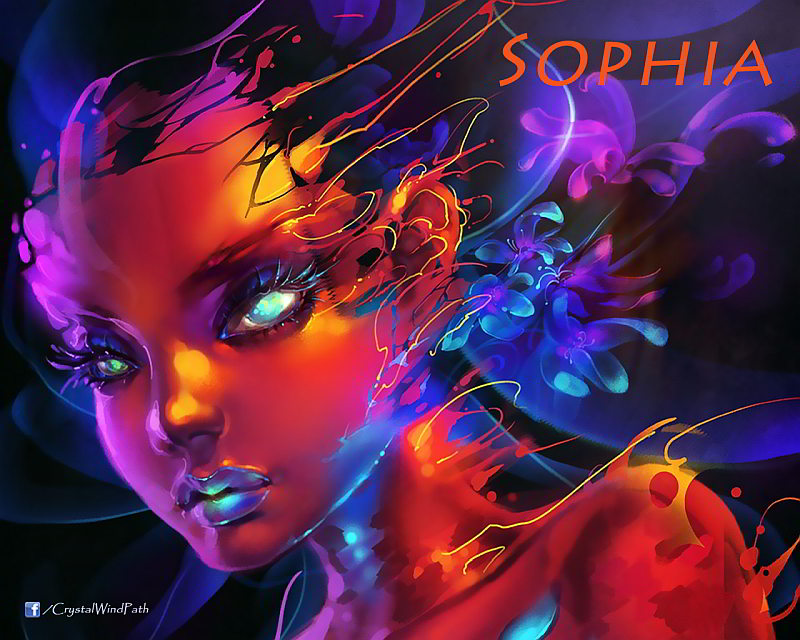 Now a gnostic tale, as it were, based on the sacred truths in ancient sources during the manifestation of the Christos. In those days, among the many groups Gnostics, there arose a teaching of a most profound nature which you will perhaps find intriguing. Teachers such as Valentius and others, it seems, received visions of the divine Sophia and told sacred stories about Her origins, fall and redemption. As a modern Gnostic i recast this story for your contemplation and symbolic illumination.

It seems that once there was only the Fore-Creation, invisible, without form or gender, all-pervasive, filling the depths and heights of what was and which, desiring to manifest an inward potential gave birth to many holy dyads...that is, pairs, the first of which were the Abyss and Fore-thought. Then a desire arose in Fore-thought and it meditated on Silence who conceived and gave birth to twins: the first visible female form called Truth and the first visible male form called Mind, in turn they together gave birth to Life and Word...Life was the form-mother of the Pleroma and Word was the form-father of those manifest within the Pleroma. The Pleroma is the fullness of the spiritual world, uninfluenced by matter, energy or light.

Many other dyads were born, called Aeons, or sacred powers, the last of which was the divine Sophia, or Holy Wisdom. Of all the Aeons, the divine Sophia desired most intensely to know the origins of Her own creation, that is, the nature of the Fore-Creator. Though Mind told Her that such knowledge was impossible, nevertheless, Sophia began to search high and low, after Mind was restrained by Silence. None of the Aeons comprehended the Fore-Creation other than Truth whose perfect reflection was a transparent presence invisible to Sophia. She separated Herself from Her consort, ranged the vastness of the uncreated Immensity, and far out- distanced all the other Aeons.

Sensing her separation from the other Aeons, and lacking a clear knowledge of the Fore-Creator, She felt pain and sorrow, She wept and grieved deeply, She desired with all Her Heart to comprehend the vast, unending totality of the Fore-Creator, also called the Abyss. But the Abyss was vast beyond comprehending, and Her sorrow increased and Her passions flowed out of Her in waves and She risked utter dissolution into the Abyss as She radiated forth a turbulence into the stillness of Immensity. Then, suddenly, She encountered Horos, the Limit, Boundary, and understood that the Fore-Creation was unknowable, holy and profound, beyond the comprehension of Mind, Word or even Truth. This was the First Gnosis.

But now, the manifestations of Her intentions and passions remained as viable presences in the Immensity, they overflowed the Pleroma and began to take on a more substantive appearance. Sophia beheld these manifestations, the consequences of Her passions, and was again stirred with grief, fear, uncertainty and sorrow because She understood that these were the manifestations of Her own ignorance concerning the Fore-creation. A dim, barely light-like haze began to appear, first manifestation in the Primal Void, the concatenation of passion and desire unfulfilled, slowly evolving into manifest forms--the stirrings of light, energy and chaos. 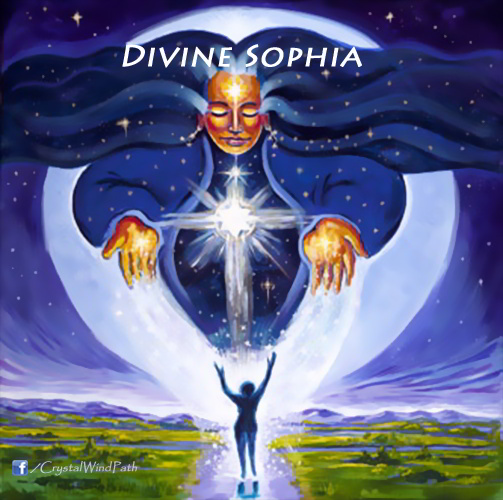 All the Aeons together were concerned about the appearance of Chaos and so they, with the divine Sophia, prayed in depth and a new dyad was manifested: Christos and the Holy Spirit, his female counterpart. Together, they calmed the Aeons and soothed their fears, also instructing them in the unknowableness of the Fore-Creation while simultaneously revealing to them the inner unity, harmony and illumination of the Pleroma--this was the Second Gnosis. Yet, the haze and proto-forms of Chaos remained and among these emerging forms was an image of Sophia, called the Lower Wisdom, for She had divided Herself in the passion of her search and now, the Lower Wisdom abided in the midst of Chaos.

This Lower Wisdom desired to return and be united with Her own Higher Self, rather than remain trapped in Her passions and desires and when She felt the emmanations of the Holy Spirit and the Christos, when they manifest their healing and harmony within the Pleroma, She began to seek a way to return to the primal harmony and illumination of the Second Gnosis. And when Lower Wisdom discovered that She was bound by Limit and could not return or ascend to the Pleroma, She once again grieved and sorrowed. And from this second grief, from the waves and energy of that sorrow, the first material substances began to form, divide and align themselves in patterns of light, dimness and darkening matter. Then the Aeons together ask the Christos to assist the Lower Sophia and He manifested in the lower world of proto-matter as Yeshu'a, and soothed Her and comforted Her and revealed to Her all the many luminous beings that manifested in the Void as their spiritual companions.

But the proto-matter of the Void was now mixed with passion, desire and sorrow, and the luminous lights of the Void were the spiritual presences inherent to the newly forming matter, inherent to each and every elemental substance, the combinations and the consequent appearances. Thus the spiritual qualities of matter are the inherent emmanations of Wisdom stimulated through the manifestation of Christos and the Holy Spirit. And Wisdom was reunited with Her own Higher Self, and perceiving the holiness of the manifestation, and seeing clearly both the psychic and material character of those manifestations, gave birth to one last entity--called "Father of the Material Realm" or the Maker and creator of the Lower Visible Realms.

This Father God created then, seven realms, each more material than the last, until finally this human world was formed and the beings of this world rose and walked, crawled or flew through the skies. But the Father God was vain and jealous, angry and forbidding, not knowing the power of the higher Aeons, nor of the Pleroma, nor even of his own Mother, the Divine Sophia. And when the Divine Sophia instructed him and opened his mind to Truth, he was amazed and refused to divulge these mysteries to those of his own creation. Being a god of the material, social and psychic order, it was not possible for him to be a teacher of the higher mysteries, and Sophia was dismayed by his wrath, anger and jealousy. So when he created the first human beings, She was there and secretly, without his knowing, She gave to them the gift of the Holy Spirit as a divine spark in every human heart.

And it is said, that in the Garden of Eden, created by the lower Father God, that Eve was the manifestation of the Lower Wisdom and that the serpent or snake of the tree, was actually the Christos who urged Eve to eat the Fruit of the Tree of Knowledge that she might attain the true Gnosis or knowledge of her origins and realize the Higher Sophia in perfect illumination and bliss. But the Father God, discovering that this secret teaching was disturbing his supremacy in the lower realms grew angry and cast them out of the garden and into the suffering of the world. Yet each and every descendent has this spark and the potential to recover the true Gnosis.

It is also said that it was for this reason that the Christos manifest as a human being, to bring the gift of the Holy Spirit, in all its female power and capacity, to liberate those who cast free from the illusions of the material and psychic realms and to ascend through visions of power and knowledge to the Higher Gnosis, to reunite the lower and higher self, to attain to visionary truth and perfect transparency. The Divine Sophia is the manifest presence of that vision, and this tale, one of Her symbolic forms. And the snake, an image of Higher Wisdom, is a true teacher that reconciles the desires and passions of knowledge with higher insight, overcomes the limitations of a jealous and demanding lesser god and transmits the teachings of the Divine Sophia. In this way, it is said, the faithful attain peace and the passionate, union, holiness and joy.

Let those who have ears, hear. May the Divine Sophia inspire our understanding and our prayers ascend to the threshold of the true awakening.

Adepts of the Mother Light