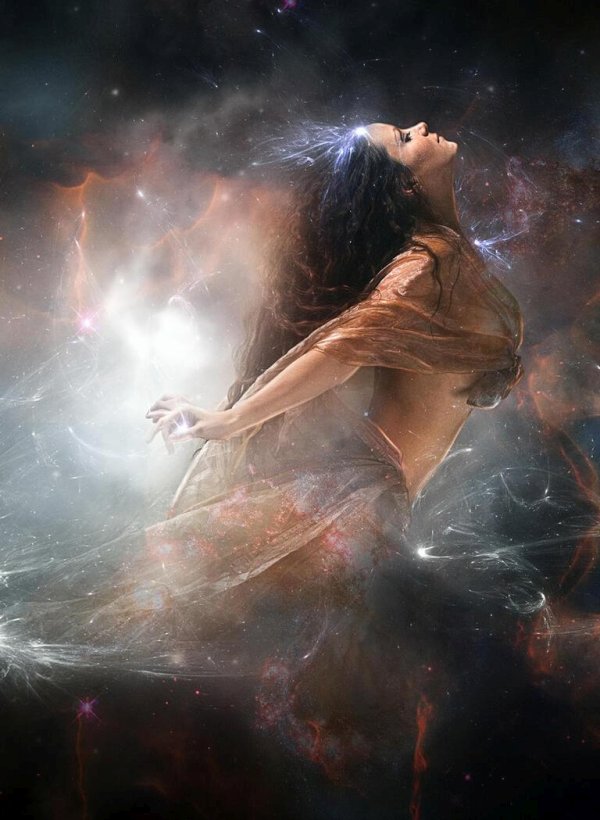 The Divine Power of Women is feared by Men of Weakness. Men of Strength are aware and revere the Life Bearing capabilities of Fertile Female Vessels and are Honored to stand as Complimentary Equals.

The Esoteric Male Force (Essence) seeds The Esoteric Female Force (Formation). Both the Divine Man and Divine Woman realize and Honor their places within The Great Cosmic Cascade of All Life. The Divine Feminine and Divine Masculine both exist in each Male and Female and to shun one for another is to reject one half of Existence.

The Aeonic Pairing, together they represent the active principle of the heavenly masculine and the receptive principle of the heavenly feminine uniting through their shared constellation, which allows connection directly into the Cosmic Spiritual Sun. As this Cosmic Triad completes the Heavenly Father, the Heavenly Mother unites with their Cosmic Spiritual Sun. This heavenly marriage heralds the birth of an entirely new creation of Suns and Sacred planets, while nurturing the Christos child on the earth. This Aeonic Pair represents perfect balance.

The Aeons are always born in male-female pairs, each of which is in itself a Divine principle, yet at the same time represent one aspect of the Godhead. These Aeonic pairs comprise the totality of the Godhead as the Two Divine principles which merge and unite as the third principle, becoming the Three in One. This heavenly prototype must be embodied, as above so below, and will come to be the spiritual embodiment process of the ascending human experience.

The spiritual completion which unites the Aeonic pair is the resulting state of Krystal hierogamic union or sacred marriage between the male and female principle with the Godhead. The stairway to heaven through the Krystal Star is embodied through inner and outer sacred marriage, in alignment to these heavenly prototypes, which will continually advance upon the Earth as we approach the event.

The sacred Aeonic Pair of Cosmic Aurora Christos and his wife, the Mother Sophia, are reunited through their Heavenly Hierogamic union as it has been made possible through their combined consciousness in physical embodiments on the earth now.

Their Sacred Marriage to the Eternal Living Spirit of God is As Above, So Below, which heralds the beginning of the material and spiritual body restoration. The restoration is the animation of the Holy Spirit of Goddess to inspirit throughout elemental matter and to collect its pieces and return them back into wholeness.

Thus, we begin the spiritual correction of the Sophianic Body in this earth through the divine marriage made with her husband, the eternal consciousness of the Aurora Christos. Through this cycle of correction of the Sophianic body in the earth, the spiritual essence of the Trinity of God the Father, Goddess the Mother, & the Children of the Sun and Moon, are unifying with their genetic equals, the Solar Masculine & Lunar Feminine as the Risen Christ-Sophia.

Through the perfect union of the Universal Mother and Universal Father, as an example of the Gender Principle with Adam and Eve in the Sacred waters of sex with Unconditional love, the pillar of the hermai is perfected and made into the image of God and Goddess through the Hierogamic union of the inner Christos-Sophia. This is represented in perfected Alchemy of unified polarities, as the Magnum Opus of Cosmic Consciousness.

In this term hermaphrodite, we see Mercury (Hermes) uniting with the Goddess of love. Her name is Venus or Aphrodite. When Hermes and Aphrodite unite they form Hermaphrodite, the perfected balance of unified male and female principle or the Aeonic Pair, Christos-Sophia.

A hermaphrodite really, truly has nothing to do with what people currently think that it is. The mystical understanding of a hermaphrodite, is the etymology of the word comes from the union between Mercury and Venus (hermes-aphrodite), and is the hierogamic union of a god and goddess, twin souls a perfected being, the perfect balance and union between divine masculine and divine feminine, united as one. When we enter this Sacred sexual act, we mimic that process in varying degrees of Consciousness. We enter into a sacred temple, the union of polarities to form a sacred unity.

Christos-Sophia in Gnosis reflects the perfection of the Law of Gender inherent in the Solar Logos principle made manifest, it is reflected as the sacred masculine and sacred feminine unified and made whole, that which is made in the true image of the Godhead. Christos-Sophia is the path of spiritual Ascension that leads to the inner discovery of the spark of Divinity that exists within the Sacred Crystal Heart, and is found within all creation.

The inner path of Christos-Sophia is taken through gradual spiritual initiations that are designed to unite the polarities of Energetic and Magnetic that exist between the inner and outer, in the world of forces, that alchemically shift our Lightbody into stages of increasing Energetic & Magnetic Balance and hierogamic union.

The inner path of Christos-Sophia leads us to seek our own inner wisdom through Divine Gnosis within our Soul, ultimately helping us to achieve spiritual freedom through attaining Unity with the Godhead. When we are at one with God, we exist in the virtue-ethics of the Spirits of Christ, emanating the pure love and wisdom consciousness state of perfected sacred marriage or Hieros Gamos. This is The Sacred Marriage and Union of TwinSouls or Twinflames.

The term Hieros Gamos is an Ancient word used generally to refer to the sacred marriage between two divinities, The Hero and The Goddess or King & High Priestess in Union with Mother/Father God in Oneness, or between two human beings (under certain special conditions); the ultimate alchemy of forces which harmonize polar opposites.” The Hieros Gamos is the Wedded Garment of God & Goddess wearing the White Robes of the One.

Hieros Gamos refers to the Risen Christos-Sophia, as the embodiment of the inner hiero-gamic union between the human being and the Divine. Hieros Gamos is the full resurrection of the body to the eternal light of Christos, Cosmic Christ Consciousness. In the body's return to energetic balance, neutral in the Unity Field or Zero Point), the Lightbody being is One with God & Goddess, and the Christos body is glorified in its perfection as representative of God’s eternal light image.

The Krystal or Christos-Sophia architecture is that which allows the synchronic phasing of inner/outer/in-between currents of energy to be inhaled and exhaled circulating the eternal life spark of creation throughout the entire organism.

Christos is the unified state of energetic balance between the masculine and feminine, and thus we refer to the completion of the three layers of sacred marriage merged as the Christos-Sophia to denote the state of energetic balance between the inner masculine and feminine principles that are manifested in either a male or female body.

On the path of Christos-Sophia we consciously participate to transform and build our lightbody, and collaborate with the Spirits of Christ to serve the Law of One, which is fulfilling our spiritual purpose to achieve unconditional love, peace and to exist in harmony with All Creation.

Order of the Star

We have 1201 guests and no members online