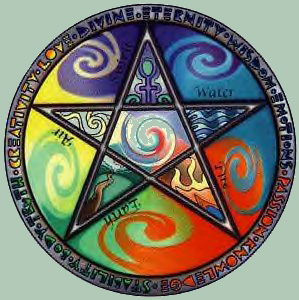 Instructions on performing the Lesser Banishing Ritual of the Pentagram, also known as the LBRP.

Part I: The Qabalistic Cross

Face east. Visualize yourself growing larger and larger, taller and taller, until you tower above the room you are in. Continue this visualization until the city you live in is small beneath your feet. See the continent as tiny compared to your majestic body. Now even the Earth is small beneath your feet. However, no matter how small the Earth is, it is still firm and solid beneath your feet, anchoring you to the ground. You will not float away. Next, visualize yourself growing so large that the planets of our solar system are as tiny toy balls spinning near your feet. Soon they are too small to see as even the Milky Way galaxy becomes a small dot of light at your feet.

Now visualize a dot of light coming from far above your head. This is only a tiny bit of the light from this source, and if you saw its full brightness, you would immediately be blinded. As you grow nearer to the light, it forms a brilliant white sphere just above your head. It is nine inches in diameter, about the size of a dinner plate. It is brighter than 10,000 suns but still only a tiny portion of the source of this divine white light. Point to the sphere above your head with your finger and "draw down" a beam of the light to your forehead, just above and between the eyes (at the third eye). While pointing to your forehead vibrate: AH-TAH.

Bring your finger firmly down your body until you are pointing toward the ground, your hand covering your groin. As you do this, visualize the light at your forehead coming down along with your finger, down through your body and beyond your feet. Vibrate: MAHL-KOOT.

Move your finger horizontally to your left shoulder. As you do, visualize the beam of white light now extending through infinite space to your left. As you focus on this beam of light vibrate: VIH-GIH-DOO-LAH.

Clasp your hands at your chest as if praying. Visualize within your chest, at the point covered by your folded hands, a brilliant golden glow. Vibrate: LAY-OH-LAHM, AH-MEN.

You have been spiritually strengthened by acknowledging yourself as the center of your universe with only the divine light coming through you.

Part II: The Formulation of the Pentagrams

Focus your attention now back to the center of your magical space; you are no longer at the center of the universe. Move to the eastern side of your space and continue to face east. Here, draw a banishing earth pentagram. The pentagram is made of flaming gas-jet blue light.

Inhale through the nose. As you do, feel energy flow from the ends of the universe through your nose and body, and down and out of the bottoms of your feet to the center of the Earth. As you inhale, raise both hands to the sides of your head by your ears.

Step forward with the left foot. At the same time thrust your arms forward so that your hands point to the middle of the pentagram in front of you. (This position is called "the sign of the Enterer".) As you do this, exhale and feel the energy come back up your body, out your arms and hands, through the pentagram and to the ends of the universe. Use the entire exhalation to vibrate the God Name: YODE-HEH-VAHV-HEH.

Point to the center of the pentagram with your right index finger. Trace a line in the air at the height of the center of the pentagram as you move in a clockwise direction around the edge of your circle's space. Go 90 degrees so that you end up in the south, facing south. As you trace the line in the air, visualize a brilliant white light emanating from the tip of your finger. At the south, repeat what you did at the east: draw a banishing earth pentagram, inhale, make the Sign of the Enterer, but instead vibrate the God Name: AH-DOH-NYE. Then give the Sign of Silence.

Repeat as above, but move to the west and vibrate: EH-HEH-YEH.

Repeat as above, but move to the north and vibrate: AH-GLAH.

Complete the circle by connecting a white line from the north to the east where you began. Then moving in the same clockwise direction, come back behind the altar. You should once again be facing to the east.

Part III: The Evocation of the Archangels

Spread your arms straight out to the sides, so that your body forms a cross. Take a second or two to feel once again the energy flowing through you and making you a brilliant cross of light at the center of the universe. The cross also represents the four magical elements of Fire, Water, Air, and Earth in equilibrium.

Note: The following uses masculine pronouns for simplicity’s sake when referring to the Archangels, though they are genderless.

In front of you, visualize a figure standing on clouds. He is dressed in a yellow robe with purple trim. He carries a caduceus wand (the symbol used by doctors, a wand entwined by serpents). His robes wave in the wind. Feel a breeze coming from behind him. Say, "Before me, RAH-FAY-EL." (Vibrate the name of the Archangel.)

Visualize a figure behind you surrounded by waterfalls. He is dressed in a blue robe with orange trim. He holds a chalice. Feel the moisture in the air. Say, "Behind me, GAH-BRAY-EL." (Vibrate the name.)

To your right, visualize a figure in the desert. He is dressed in a scarlet robe with green trim. He holds a flaming sword and you feel heat coming from this direction. Say, "On my right hand, MEE-CHAI-EL." (Vibrate the name. The "CH" is a guttural sound as in the German "ach" or the Scottish "loch".)

To your left, visualize a figure on a fertile landscape. He is dressed in greens and browns and holds a pentacle. Feel the stability and strength of Earth. Say, "And on my left hand UR-EE-EL." (Vibrate the name.)

Move your left foot out to your left side so that your body is in the shape of a pentagram. Visualize another blue pentagram all around you, outlining your body. Say, "For about me flames the pentagram..."

Visualize a golden hexagram, a six-pointed star sometimes called a Star of David, within you, where your heart is. Say, "...And within me shines the six-rayed star."

Here is a summary that gives a schematic of the LBRP without the explanations.

11. Hands out, say, "Before me, RAH-FAY-EL; Behind me, GAH-BRAY-EL; On my right hand MEE-CHAI-EL; and on my left hand UR-EE-EL. For about me flames the pentagram, and within me shines the six-rayed star."

The instructions for the LBRP may look complicated, but once you are comfortable with the ritual, it usually takes just five to ten minutes.