5 Home Remedies for Prostate Difficulties
A+ A A- 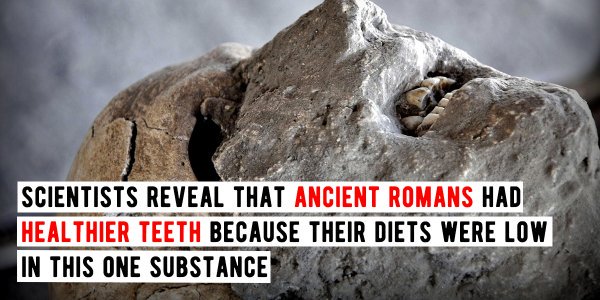 Although Ancient Romans lived in era before toothbrushes and toothpaste, new research has revealed that they in fact had perfect teeth. Scientists appointed by the Archaeological Superintendence of Pompeii used CAT scans to examine the remains of 30 men, women and children killed in Pompeii. They conducted x-rays on the bones and teeth and were surprised to see that the Pompeians incisors and molars were in good shape.

Italian radiologist Giovanni Babino was the lead scientist and stated in a press conference that the ancient Romans had perfect teeth and no immediate discernible need for dentists. It is believed that the Romans low-sugar diet played a huge role in their dental hygiene. Dr. Elisa Vanacore is a dental expert and orthodontist. She oversaw the examination of the teeth and said that  “the inhabitants of Pompeii ate a lot of fruit and vegetables but very little sugar”. She went on to say that “they ate better than we did and have really good teeth. Studying their teeth could reveal a lot more about their lives.” According to Vanacore, the high levels of fluorine in the air would have also contributed to the Pompeians healthy teeth.

It is important to note that this is not the first instance in which our predecessors have been found to have good dental hygiene. For example, most early Tudors also had really healthy teeth. Again, this was largely to do with the lack of sugar in their diet. It wasn’t until the 1600s – when sugar production became popular in France, Spain and Germany etc – that sugar became a common feature in many European diets.

We have 1535 guests and no members online

We have 1548 guests and no members online