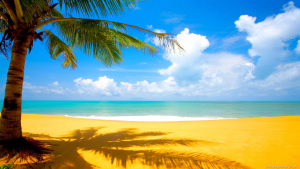 A few days ago, I had an amazing experience during my meditation. I’d filled myself with Light and asked what my ‘original blueprint’ was – was it the blueprint of my first experience of being in a physical body? The answer I received was unexpected to say the least.

I experienced myself as a warm, turquoise ocean, feeling languid and very much at peace, aware of a myriad of different life-forms that moved within me. As I surfaced, there was a beach in front of me and I moved myself towards it. I say ‘moved myself’, as I moved purely by intent. Once on the beach, I moved into the warm sand and became it. It was warmed by the heat of the sun on the surface, but cooler below, where it was saturated by the water of the ocean.

I moved further up the beach and became a rock. I felt surrounded by Love and realised this came from my connection with Mother Earth – I knew I had once been a part of Her body, but that I had been separated from Her during a great upheaval. She still held me close however, as I was embedded deeply into Her surface. I felt a close resonance with Her and I knew that the crystalline structure that was my essence held all of Her memories. I became aware of many small cracks and fissures in my surface, each with a memory of the elements that had left their mark on me and changed me. Those were my own memories. It was wonderful to dream away, held close in the Mother’s embrace and basking in Her Love.

When I felt I had fully explored this experience and was ready to move on, I noticed the greenery not far away. I was struck by the beauty that surrounded me and felt great joy at being able to experience it. I reached a tree and as I joined with it, I became aware of feeling my roots solidly embedded in the ground, and enjoyed the close connection with the Mother, who supported and nourished me. Aware of the water and nutrients that She willingly gave and I absorbed through my roots. I felt them move up into my strong, solid trunk, and eventually into my limbs, which reached high up into the sky. A warm breeze gently moved my limbs, and feeling the light of Father Sun on my leaves, I stretched up as high as I could to absorb as much of His love and light as possible.

When I was ready for my next experience, I felt the call of freedom in the breeze and became the wind. It was a wonderful feeling to be free, moving around in Father Sun’s loving warmth, and experience everything in passing, although I did stop for a few more in-depth experiences. Eventually I came to a big mountain that spewed fire, something I hadn’t experienced before, although I had a vague recollection of it from my experience as a rock. Ever curious, Imoved closer to the fire, although the heat was difficult to bear. I was determined to experience it however and eventually, I was close enough and became the fire. But as soon as I had, the heat was too much for me and I felt myself floating up into the Light. I was home again.

I asked Spirit whether these wonderful experiences had been my first of physical life, which was confirmed. So this was my original blueprint. I asked whether I had been in LeMuria, which was also confirmed. I was told that I had been one of the first to experience physical life on planet Earth. I did not need to have a physical body however, as the Earth’s vibration was very high, and there was no need to experience having a physical body of my own. There was no separation, as ALL just IS, which had allowed me to move from Being to Being, to experience ALL in many different physical forms. I thanked Spirit with all my heart for helping me to remember this experience and came out of my meditation.

I sat there for some time, musing over my experience and trying to imagine how returning to my original blueprint would affect me in this lifetime. The only conclusion I came to was that it would be WAY BEYOND WONDERFUL to experience life that way again!

For anyone who wonders who I am, my book ‘The Mystery of Self’, the true story of my life and spiritual journey, which started with a Near Death Experience, is here on wordpress.    http://themysteryofself.wordpress.com/

CoVid-19 Update #9: What We Still Don’t Know
The Needs of the Moment
Top Ten Myths About Being a Psychic/Healer

We have 1428 guests and no members online