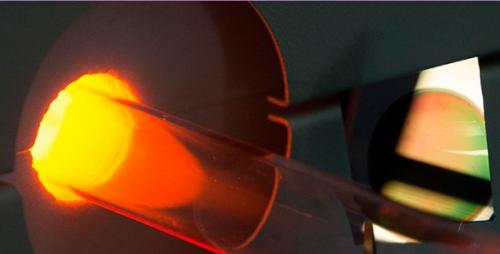 Solar cells that produce electricity 24/7, not just when the sun is shining. Mobile phones with built-in power cells that recharge in seconds and work for weeks between charges.

These are just two of the possibilities raised by a novel supercapacitor design invented by material scientists at Vanderbilt University that is described in a paper published in the Oct. 22 issue of the journal Scientific Reports.

It is the first supercapacitor that is made out of silicon so it can be built into a silicon chip along with the microelectronic circuitry that it powers. In fact, it should be possible to construct these power cells out of the excess silicon that exists in the current generation of solar cells, sensors, mobile phones and a variety of other electromechanical devices, providing a considerable cost savings.

"If you ask experts about making a supercapacitor out of silicon, they will tell you it is a crazy idea," said Cary Pint, the assistant professor of mechanical engineering who headed the development. "But we've found an easy way to do it."

Instead of storing energy in chemical reactions the way batteries do, "supercaps" store electricity by assembling ions on the surface of a porous material. As a result, they tend to charge and discharge in minutes, instead of hours, and operate for a few million cycles, instead of a few thousand cycles like batteries.

These properties have allowed commercial supercapacitors, which are made out of activated carbon, to capture a few niche markets, such as storing energy captured by regenerative braking systems on buses and electric vehicles and to provide the bursts of power required to adjust of the blades of giant wind turbines to changing wind conditions. Supercapacitors still lag behind the electrical energy storage capability of lithium-ion batteries, so they are too bulky to power most consumer devices. However, they have been catching up rapidly. 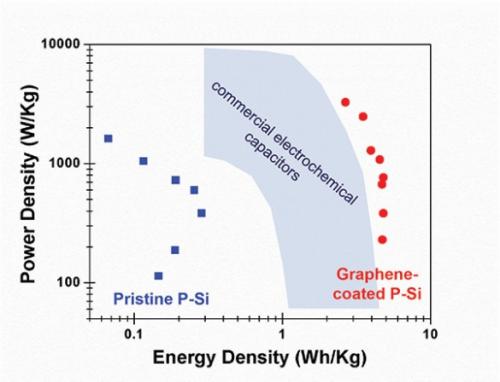 Research to improve the energy density of supercapacitors has focused on carbon-based nanomaterials like graphene and nanotubes. Because these devices store electrical charge on the surface of their electrodes, the way to increase their energy density is to increase the electrodes' surface area, which means making surfaces filled with nanoscale ridges and pores.

"The big challenge for this approach is assembling the materials," said Pint. "Constructing high-performance, functional devices out of nanoscale building blocks with any level of control has proven to be quite challenging, and when it is achieved it is difficult to repeat."

So Pint and his research team – graduate students Landon Oakes, Andrew Westover and post-doctoral fellow Shahana Chatterjee – decided to take a radically different approach: using porous silicon, a material with a controllable and well-defined nanostructure made by electrochemically etching the surface of a silicon wafer.

This allowed them to create surfaces with optimal nanostructures for supercapacitor electrodes, but it left them with a major problem. Silicon is generally considered unsuitable for use in supercapacitors because it reacts readily with some of chemicals in the electrolytes that provide the ions that store the electrical charge.

With experience in growing carbon nanostructures, Pint's group decided to try to coat the porous silicon surface with carbon. "We had no idea what would happen," said Pint. "Typically, researchers grow graphene from silicon-carbide materials at temperatures in excess of 1400 degrees Celsius. But at lower temperatures – 600 to 700 degrees Celsius – we certainly didn't expect graphene-like material growth."

When the researchers pulled the porous silicon out of the furnace, they found that it had turned from orange to purple or black. When they inspected it under a powerful scanning electron microscope they found that it looked nearly identical to the original material but it was coated by a layer of graphene a few nanometers thick. 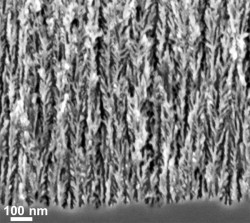 When the researchers tested the coated material they found that it had chemically stabilized the silicon surface. When they used it to make supercapacitors, they found that the graphene coating improved energy densities by over two orders of magnitude compared to those made from uncoated porous silicon and significantly better than commercial supercapacitors.

The graphene layer acts as an atomically thin protective coating. Pint and his group argue that this approach isn't limited to graphene. "The ability to engineer surfaces with atomically thin layers of materials combined with the control achieved in designing porous materials opens opportunities for a number of different applications beyond energy storage," he said.

"Despite the excellent device performance we achieved, our goal wasn't to create devices with record performance," said Pint. "It was to develop a road map for integrated energy storage. Silicon is an ideal material to focus on because it is the basis of so much of our modern technology and applications. In addition, most of the silicon in existing devices remains unused since it is very expensive and wasteful to produce thin silicon wafers."

Pint's group is currently using this approach to develop energy storage that can be formed in the excess materials or on the unused back sides of solar cells and sensors. The supercapacitors would store excess the electricity that the cells generate at midday and release it when the demand peaks in the afternoon.

"All the things that define us in a modern environment require electricity," said Pint. "The more that we can integrate power storage into existing materials and devices, the more compact and efficient they will become."

Thank you!
ॐ Namasté - Blessings!
"Life is an echo, what you send out comes back."
© 2008-2022 crystalwind.ca. All rights reserved.
Dispelling Shadows - Everything Leads Us To The Light
At This School Kids Don’t Get Sent to Detention, They’re Sent to a Mindfulness Room
The World As We Know It Has Changed And There Is No Going Back To What We Were - 6 Predictions
Get This App Now!