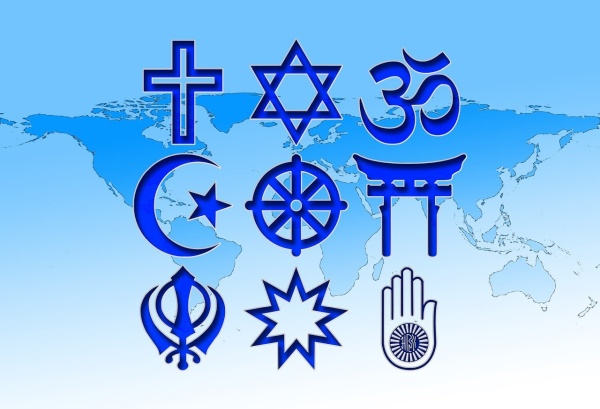 Here's what I have been getting as a student in Seth University, Dream Campus, for some time now, which is also connected in the way in which women will, in the future, control the out-of-control OVER-population dilemma. An adjustment is putting it mildly...this is 2021, not 1621.

Organized religion is fastly becoming obsolete, outdated, and outmoded as more open-minded people are THINKING for themselves and not allowing religion, government, politics, and science run their lives--as has been done so for centuries. This is what is "trending" as one workable solution for future probable realities.

Absolutely an adjustment, and those men, who have not as yet learned their lessons, who egotistically refuse to learn their lessons because they love war, killing and oppression and suppression, have no control over those women banding together, psychically speaking, pulling out all the stops, over-riding the ego men, and turning off their biological fertility baby-producing process for a generation or two, thus becoming mysteriously UN-fertile, until those over-controlling men leave physical reality and go "back to school" thus cleansing the region of such negativity, hate, killing and subjugation of both women and men for greed and gain.

Thus allowing a new generation of children to be born when the women, who have psychically banded together IN THE DREAM STATE flip ON their fertility processes, like a psychic storm that cleanses the system, as it is high time for certain men to STOP destroying the world and everything in it, and that includes the environment too.

At that point in time, by year, 2075, when Renaissance Two, the Shift in Consciousness is culminating, children will fully maturate by age ten, and will be born using their innate ESP powers of mental, psychic communication, they will use their powers of "Psychic Broadband" and will inhabit a brave, new world, that cares about every single person and every single animal and respects the ecosystem that sustains ALL life.

The childish, but necessary, " toy blocks" -- like religion and politics, for example, that were played with by previous generations will dissolve and be replaced by new belief acceptance that everything on planet earth, or rather, "schoolhouse earth" is sacrosanct.

Those who have previously killed and suppressed in past lives, for example, will get "between lives" education from the sage, profound Speaker-Teachers, that is, the after-death volunteer "first responders" who assist in the gentile education of the newly arrived, "survival personalities" and many will return to the earth "stage" to play out new creative roles, for, and it is very important to realize, that knowledge and wisdom both UPLIFT and RESTRICT at the same time. When those who have killed come back and do NOT KILL, but to lovingly embrace all existence, will then lead fulfilling lives knowing fully well that they CREATE THEIR OWN REALITY according to their beliefs, their intents, their, attitudes, their expectations, and their desires, and that they do so individually, and all together, collectively speaking, en masse.

You see, in death, there is no punishment, but rather continued education until personalities learn and graduate from the earth plane no longer needing or requiring such past harsh experience and expression. No one leaves the earth plane for other realities and dimensions until they have absorbed all the necessary education and lessons, they give themselves to then no longer require PHYSICAL existence. 2075. Be there. Dream.

To explain very briefly. In 1962, at age 17, I was directly contacted by an ET visitor from a non-physical reality, who turned out to be a sage, profound Speaker-Teacher, and I got many of my probing questions answered--that I could not otherwise get answered from the usual means--by this highly developed being who appeared to me as a young man. I had what you would call a close encounter of the direct kind. I asked for answers, and they came.

I recall my early questions to him, who revealed to me that he had many prior earth lifetimes and no longer needed physical expression...Is there a God, does God exist, do you believe in God, where is God...Is there a devil...is there a heaven and a hell...what happens to me when I die and what is the purpose of life on earth? I wanted REAL, honest, straight-forward answers. I got them.

He, he did not have a name, however he was a personality with a message that appeared to me as human, he went on to spent nearly a year, through many impromptu appearances, explaining to me, using limited words and language that I could relate to at my level of development and comprehension, and, I must say that his enlightening answers lifted an unbelievable weight off my shoulders, a weight that was placed there by early programming by my parents, relatives, friends, teachers and clergy, that is, my youthful indoctrination in the then accepted education system prevalent at the time.

I will give one of his answers to my questions, the one about God. His answer defining God has taken on newer and greater meaning as I grew older, and my own educational processes expanded. Words really don't do it justice. Sixty years later, I am still learning.

There is no supreme being, no deity, no objectified, personified man called God. That would be an isolated, static, obsolete centralized God. The is no "sky God" in a heaven hanging off the edge of a cloud looking down and reining reward, punishment, and death to those mortals on earth who do not worship and adore HIM. There is no God who creates humanity and then later decides to kill half of his creations.

I was told that early religion was ancient man's innocent desire to find his source and the source of life, and in doing so, later on, man became egotistical and out of a selfish need for greed, gain, power and control, man created God and invented many religions for control of man's followers and religion flourished and natural learning and curiosity was stymied and prevented by men who controlled people and killed them if they disagreed. Man closed mans minds.

What you call God, is, in actuality, the omnipotent, all-pervasive, electromagnetic ENERGY FORCE that intelligently holds all existence together in perfect harmony, balance, symmetry and ORDER. Yes, as Einstein postulated, there is order to the universe. God is the energy force from which all existence springs. God is ALL THAT IS.

Simply put. There is no one stationary god as a centralized figure. There is, however, one primary energy gestalt of consciousness, and from that energy force--source creation occurs, thus, we all are mini-gods on our own paths of creativity, and all together, we continually form, in essence, god the energy force for we all are integral portions of the omnipotent god energy, and the god energy simply cannot be separated from us and all creation. We are God incarnate.

The basis of the god force is LOVE, as God loves all creation unconditionally. In effect, the universe loves itself and all its creations. Until this is learned, humankind learns little.

Thank you!
ॐ Namasté - Blessings!
"Life is an echo, what you send out comes back."
© 2008-2022 crystalwind.ca. All rights reserved.
The Quantum Leap Ascension Process
NEW YEAR, NEW LIFE
Opening the Relationship With Your Higher Self
Get This App Now!