The Fear of Fear: How To Beat It 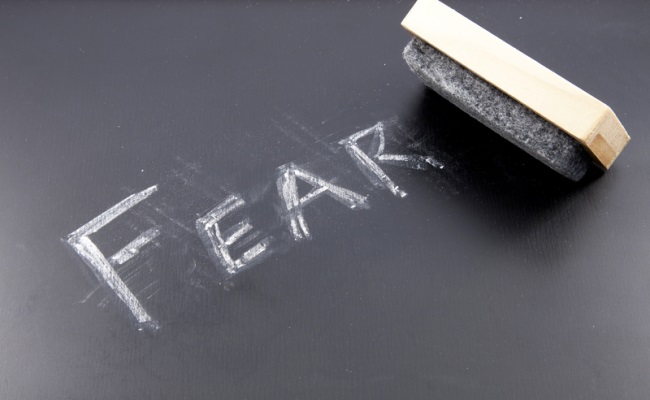 Fear is real enough isn’t it?

I mean, there are times when each one of us feels ‘afraid’. If we didn’t we most probably wouldn’t be around to tell tell the story.

Biological fear is instinctual – but non biological fear is not instinctual. So firstly we have to sort these two out. Fear as an instinct is that inner warning bell – or shiver – which tells us that we are probably or actually – in danger. It needs heeding.

But fear also comes as something superimposed. A form of indoctrination which renders us fearful about things which we have no business being fearful about. And it is this type of fear that we need to get a grip on – and ultimately reject completely.

You see, fear in its non biological form, is the single greatest weapon of mass destruction to our subtle, responsive state of being. The state that opens us to flows of creative energies, inspirations and actions. States of being which, in turn, have the greatest capacity to turn around the totalitarian regimes of oppression that hold up the pyramids of power.

No wonder the fear card is played to the hilt! The ruling cabal knows from experience that so long as it can keep people in an almost perpetual state of anxiety/fear, there’s not a chance that the creative energies will rise up in rebellion and depose them.

So there you have it. Fear is the key controlling agent of this era, and the media are being whipped into a maisma of false fear-mongering even as I write. So much so that you are supposed to be scared to even open your window – let alone your front door!

So one might conclude – that that is indeed a fear to fear. And one would not be wrong – except for the fact that this indoctrinated fear is 100% sham!

It is the instinctual fear which is the only valid version.

Thus, rather than quaking at the notion that a media created psychopathic terrorist is crouching just outside the garage door, we should say to ourselves “Hey, wait a minute, let’s get this in proportion.” Step back from such mind controlling games and see them for exactly what they are: top-down psy-ops for blocking us all from stepping out of our serfdom and acting from the predilection for joy and passion which is our birth right.

Be wary of those who claim that fear is ‘an illusion’. It is not. We cannot ‘escape’ fear by pretending it doesn’t exist. That is the coward’s route to nowhere. We can, however, go face to face with with our fears and explore their origins. Tease-out the entrenched or semi-entrenched symptoms – and have a good look at them.

Here, we are unearthing and bringing to light that which prefers the shadows and darkness: just like the fake psy-ops terrorists hiding behind the garage door.

By engaging these shadow elements and drawing them into the light of day, we are performing a critical part of the actions necessary to oust our personal oppressors. Particularly that oppressor Carlos Castaneda refers to as ‘the foreign installation’.

This ‘foreign installation’ – or archon/vampire as we tend to call it – is a good friend of the illuminati bankster cabal. Both feed off the negative energies that fear produces. The corporate bankster cabal’s ‘control’ activities sport tentacles that reach out around the globe and pry on us, ‘monitoring’ our every movement. While the ‘foreign installation’ works from the inside – via insidious psychotic scaremongering and the introduction of simple ‘wrong thinking’ . Between them, the cabal and ‘the installation’ cook up a nasty stew which reeks of deception, terror stoking and outright mind control.

So you see, fear is the chief tool of our oppression. The chief weapon of our self-paralysis. However, it can be rendered utterly inert and without power, once we recognize its origins and bring to light its phony role.

The process of conquering fear involves pin pointing the tell-tale signs, like: monetary obsessions, preoccupation with health, worry about one’s children’s futures, the insecurity of maybe not attaining the material – and even spiritual – ideal one has set one’s self, a general fear of the outside world and even the fear of fear itself; all these and more are manifestations of an ingrained indoctrination about the way we are ‘supposed’ to live and understand our lives. The act of breaking-free from our mostly self imposed prisons, leads to a period of great rejoicing. Rejoicing in the creative flowering of our newly unfettered spirits.

The great majority of fear blockages can be traced to the entrenched societal goals we have allowed ourselves (with the help of the foreign installation) to accept as valid. Whereas in fact, these goals are nothing to do with our true purpose here on Earth, they are simply the cunningly manipulated chess pieces of the military industrial complex’s endless war games. Our fear blockages simply trick us into unwittingly supporting the cabal’s oligarchical ambitions.

To hell with that deeply manipulative war game!

Now we’re on the road to exposing it for what it is. And that means rooting out its slimy tentacles from our overburdened psyches – and consigning them to the proverbial garbage bin.

No longer can we afford to be held up in our onward passage by the deliberately placed banana skins of an aggressive, moribund status quo. The use of fear as a weapon of control has never been as overplayed as it is at this moment. It is being used as the last line of defence of a totalitarian psychotic dream. The whole political agenda reeks of it.

A new type of courage is called for in humanity now. The courage to face our inner ghosts, and to name, shame and eject them. You will find that they don’t give in so easily. Don’t give up. Your life – and all life – depends upon your victory.

Remember, they are simply sycophantic agents of ‘the foreign installation’ which somehow or other, got installed in us human beings at some dark point of early history.

But now that we can identify the symptoms – we are half way to victory. Now that we can separate our biologically necessary fear from our non biological unnecessary fear, we have a greatly enhanced vision of the way forward. And that means freeing both ourselves, and our planet, from the tyrannical forces of oppression that otherwise render us perpetual slaves to their non biological fear-fuelled power games.

Julian Rose is an early pioneer of UK organic farming, an international activist and author.

He is currently president of The International Coalition to Protect the Polish Countryside. His latest book “In Defence of Life” can be purchased on www.amazon.com or by visiting Julian’ web site at www.julianrose.info

back to top
The Consolation of History
Could Telepathy Be How Plants Communicate?
We Are Spiritual Beings Learning How to be Perfectly Human - Part 2

We have 1444 guests and no members online