The Wheel of Blame 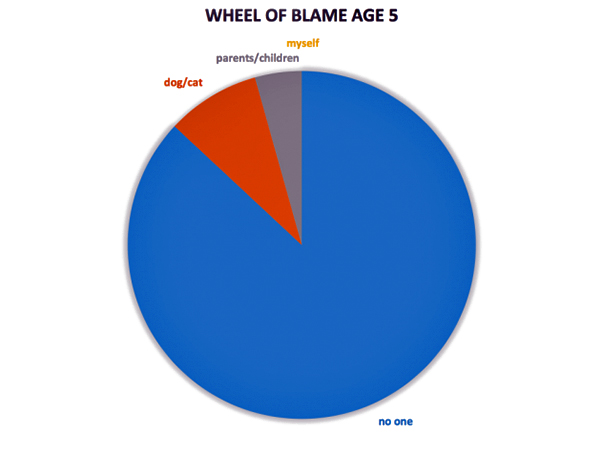 I don’t know who invented the “wheel of blame”. I first saw it on the refrigerator of Tree’s community house kitchen. It listed the community members and pets (eg the “scapecat”) and came with a spinner that allowed blame to be immediately and indiscriminately apportioned for anything that went wrong. The larger spaces on the wheel were labeled with those deemed most likely to be blamed, or blameable. It’s been reinvented in many different places; there’s even an app for it.

In recently thinking about our human propensity to assign blame for things, I started listing those people and things I had caught myself blaming for various upsetting and outrageous things over the years, and how my propensity for assigning blame had shifted over my life:

The first years of my life were pretty carefree. I tended not to assign blame, since nothing, it seemed, was blameworthy. But then, I entered school, where blaming seemed the predominant sport, and things went downhill from there: 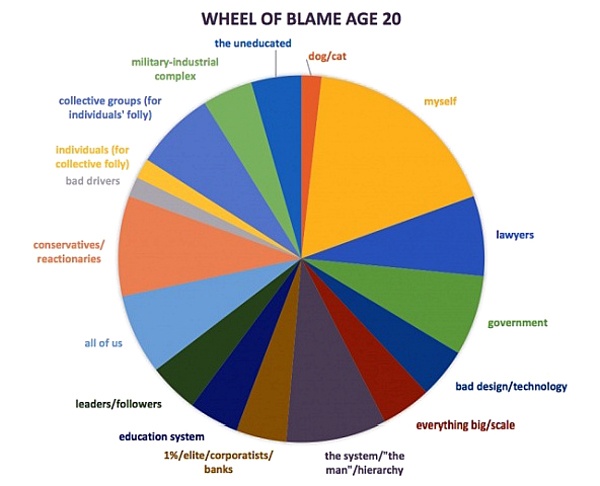 At 20 I was your proverbial angry young man. My wheel of blame was probably pretty typical for hippy-socialist-long hairs in the late 60s and early 70s. I blamed “the system” while secretly worrying that the system was really “all of us”. I blamed the uneducated for their own lack of knowledge and awareness (a form, I guess, of blaming the victim). I blamed bad drivers (slow traffic, accident delays) when I was late. I put collective labels of blame on the misbehaviour of rogue individuals within the groups I was inclined to dislike, and blamed the most visible individuals in misbehaving groups for what was really a collective folly. 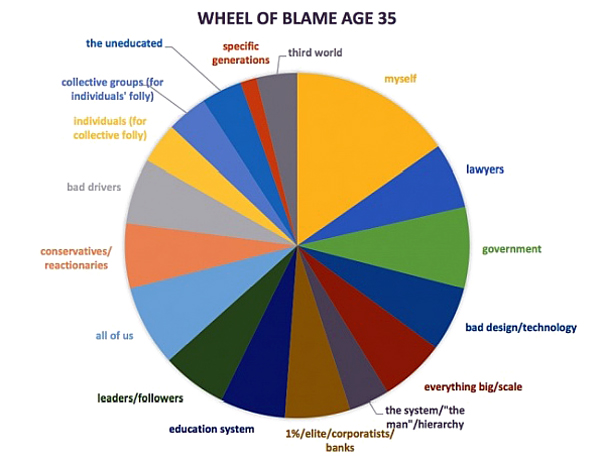 For the next couple of decades my pattern of blaming didn’t change much, except that for the first time since early childhood, I started to doubt, occasionally, that anyone was to blame: 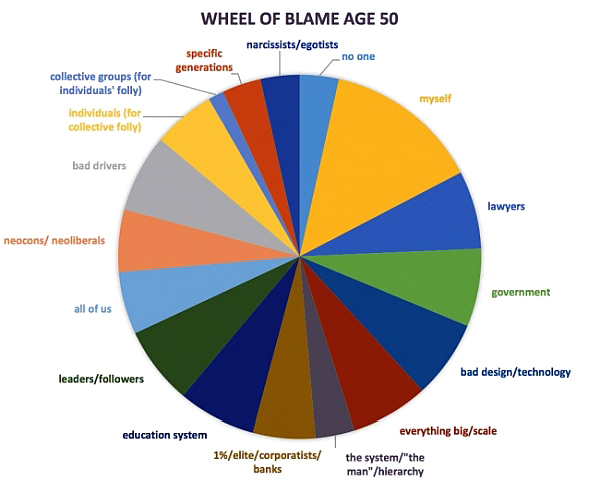 As I started to blog (in my 50s), learning about things (complexity, culture, science, nature and human nature) I had neglected during my peak working life, my patterns of blame started to shift sharply. 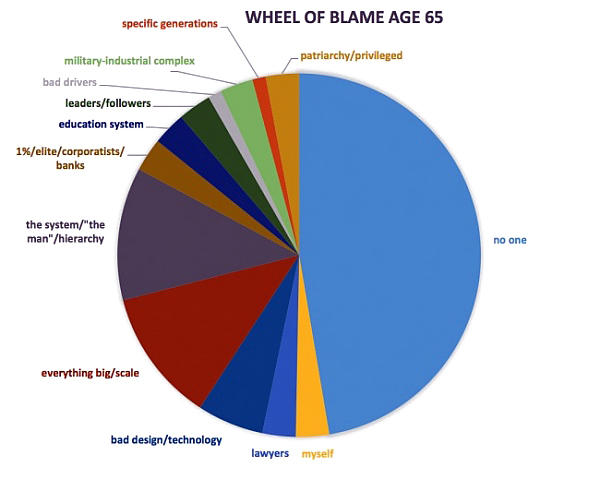 So now, as a non-dualist, I am increasingly reluctant to blame anyone for anything, since blame assumes people have free will and control over their behaviours and beliefs, and non-duality asserts that they do not. Ending the blame game has also made me much less reactive and less angry than I used to be.

But I am still inclined to blame myself, though much less than I used to. And I can’t seem to stop blaming badly designed technologies (notably anything developed by Microsoft) for my online struggles. And bad drivers, until I stop and think what trauma and suffering must be driving them to so misbehave. And systems, especially everything large scale, including the education system, the financial system, and the corporatism that prevails in large capitalist enterprises, though I realize there’s no point blaming anything that is in  no one’s and no group’s control. The cause of your suffering is not necessarily to blame for it.

And of course it’s still fun to blame the lawyers. Like the rest of us, they are surely all doing their best to make their lives, and the lives of their loved ones, better, and make the world a better place in the process. Though it seems their best is particularly inadequate.

There are some groups I have never blamed for anything — although I realize they tend to be the scapegoats of large segments of the population. “Terrorists” (whatever that word means), immigrants (or “foreigners” as they have traditionally been labeled by xenophobes), the weather, the victims (blaming the poor, sick and uneducated for their predicaments), users and customers, subordinates, and “a growing lack of morality” or “declining standards” are often blamed for a host of problems, but not by me. And of course

like to “blame Canada”, which I think only Canadians, who enjoy blaming themselves more than nationals of most nations, should be allowed to do.

Looking at the wheel of blame turn as my life has progressed, and as the number of objects of blame decrease for me, I get the disquieting feeling that, if I were to draw my wheel of blame at age 80, it will look very similar to the one at age 5. Except for blaming the dog or cat. From eating the homework to making that bad smell that embarrasses everyone in the room, that’s always been a bad rap.

back to top
The 118 Days of Creation
A Message from the Faeries
The Corona Virus: The Bigger Picture

Reality Quicksand & How You Can Navigate It!

Your Obligation To Your Past ~ Teachings of the Masters

We have 1221 guests and no members online