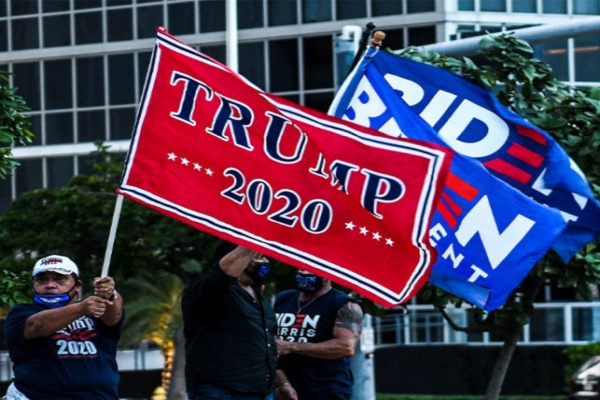 This 2020 US election astrology prediction looks at the astrology of election day to explain the extreme polarization and civil unrest this election is causing.

A comparison of election day transits to the horoscopes of Donald Trump and Joe Biden gives some insights on who will be the next president of the USA.

The moon phases leading up to the November 3 give an indication of the general environment. They set the backdrop for the planetary aspects at that time. The pre-election moon phases last until November 15.

The October 16 new moon was opposite Mars and square Saturn and Pluto. So it is causing anger, impulsiveness, hostility, delays, intensity, extremism, and a ruthless quest for power.

In the two days since the new moon, there has been a surge of civil unrest across the world. Here are some headlines just from October 17:

The October 31 full moon is extremely close to Uranus and also a violent fixed star. It is even more indicative of sudden change, civil unrest, violence, and rebellion than the preceding new moon.

Both pre-election moon phases working in combination create a highly volatile backdrop to the 2020 US presidential election. Anger and frustration are turning to rebellion, on both sides of the political fence. But the major theme is that of change. 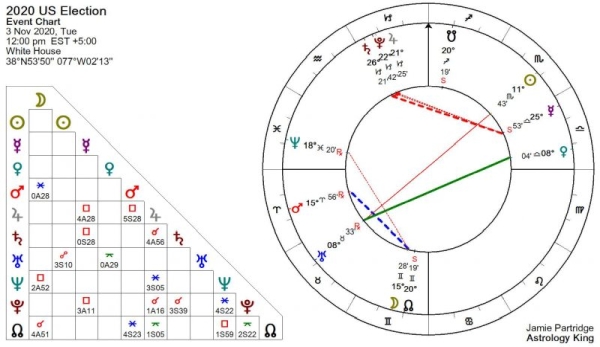 Jupiter conjunct Pluto could make people more philosophical, ethical, moral, generous, and community-minded. And this could bring about a positive transformation affecting the masses.

However, this alignment can also amplify and intensify negative energy. And the conjunction is close to Saturn which is square Mercury. Fuelled by negative thinking, Jupiter conjunct Pluto can produce selfishness, greed, jealousy, self-righteousness, ruthlessness, fanaticism, extremism, and revenge.

Mercury stationary direct on November 3 brings the potential for communication and technology breakdowns, disinformation, false news, disagreements, and travel delays. Postal votes may be lost and recounts are very likely.

Mercury square Saturn stays within a one-degree orb from October 30 to November 8. This greatly increases the disruptive influence of Mercury stationary direct.

So as well as endless arguments, lies, scandal and slander, and election fraud, a contested election result is likely. The vote counts and the calling of the election result may be delayed by court cases. 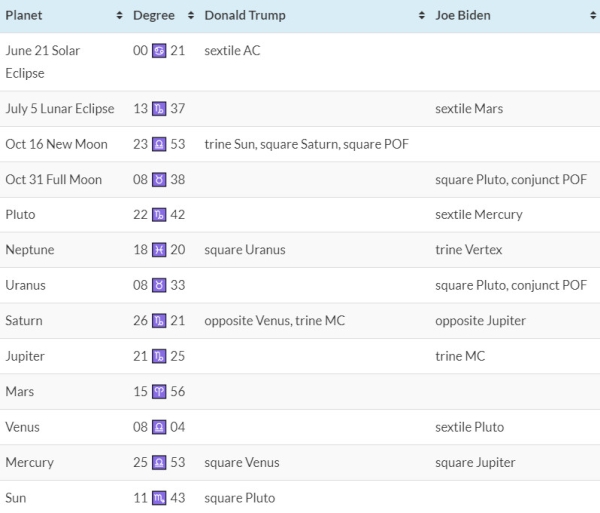 The table above comparing the transits to the horoscope of Donald Trump and Joe Biden shows both to have a mix of helpful and unhelpful transits.

Both have challenging transits from Mercury direct. But there are some major differences. Joe Biden has more positive transits than Trump, who has more challenging ones.

Finally, the biggest difference which favors Joe Biden is transiting Pluto sextile his Mercury. This is excellent for his election campaign as it gives intellectual power and a very persuasive communication style. He can put force behind his reasoning and convince many people.

The moon phases leading up to the 2020 US Election point to anger, frustration, and change. This probably favors Joe Biden but the potential for civil unrest, violence, and rebellion is not good for anyone.

The 2020 US Election astrology aspects point to fanaticism and extremism. Lies, propaganda, lost votes, and a contested result are possible.

Transit to the charts of the candidates gives both of them a fighting chance. But Joe Biden has more favorable transits, compared to Trump’s more challenging transits.

So based on the mood for change from the October 31 blue moon, and the respective transits, I predict Joe Biden will become the next president of the USA.

We have 2414 guests and no members online