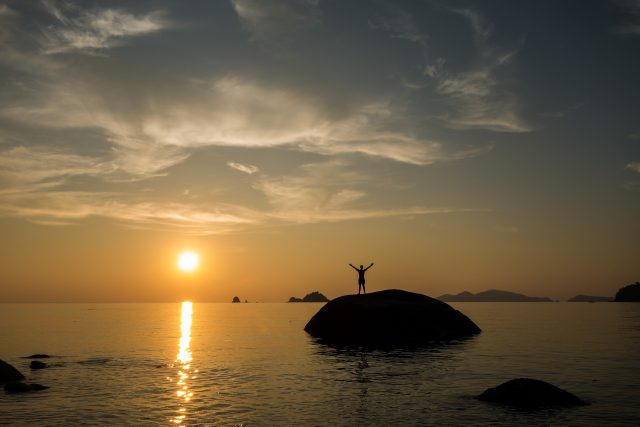 ‘At the very bottom of the hardest, most rigid, narrowest and most asphyxiating consciousness, I struck upon an Almighty Spring that cast me up forthwith into a formless, limitless Vast, vibrating with the seeds of a New World’. The Mother

Jupiter and Saturn form their Great Conjunction on the Solstice at 18:22 UT in the first degree of Aquarius. As they do so, these words of The Mother speak profoundly to where we find ourselves now. The rigid and asphyxiating consciousness that has shaped our world beyond recognition this year, has caused immeasurable suffering.

Countless lives have been devastated and untold suffering has occurred in the shadows, often ignored to further a questionable agenda. But this meeting of the Great Benefic (Jupiter) and the Lord of Karma (Saturn) in the first degree of the sign of collective humanity (Aquarius) signals that our time has come. Relinquishing the oppressive Capricorn energy that has defined 2020, this Great Conjunction reflects a shift of power in favour of the people – our global human family. The authorities signified by Capricorn have had their chance, and whilst Pluto’s journey through Capricorn continues until the end of 2024, the end of its cosmic alliance with Saturn and Jupiter marks a significant reduction of authoritarian influence in this new cycle of becoming. This is a shift to a horizontal, egalitarian connection from one of vertical superiority. The people – you and me – are arriving in our power.

From one conjunction to another

2020 began with the Saturn Pluto conjunction lending its support to those with aspirations for domination and emboldening those for whom oppression is simply another tool to further personal goals. We all know where that’s got us! As the year ends with Saturn shifting alliance to Jupiter, the planet of inspiration, faith, optimism, freedom and resilience, our personal and collective capacity to embody this shift is potentised. But this is only the beginning. There’s still much to be done and, at times, endured. Saturn works slowly and with great care as it strengthens us for the road ahead. But we must each do our part. We’re not about to be saved, but instead have reached a tipping point at which our influence over the future is coming into its own. This is cause for hope!

Conjunctions between Saturn and Jupiter occur every twenty years. They speak to humanity’s efforts to create sustainable structures which allow for a meaningful experience of life on planet earth. Jupiter is a future-focused planet, and Saturn the planet of linear time and the maturation that accompanies it. Together they seek to fulfil the potential of the human family in line with its collective karmic load and combined potentiality. When these planets meet, the old and new co-exist with not a moment’s space between. Whilst we think in terms of linear time, truth exists outside of it, revealing itself in ways we can now better appreciate. The most ancient truths can be as vibrant as cutting-edge thought and the latest perspective as jaded as the most oft repeated lie. This conjunction in Aquarius weaves the past and present into a vivid singularity, creating a perceptual shift which casts both the past and future in a new and illuminating light.

A new dimension of truth

As Jupiter and Saturn herald the beginning of a new twenty-year cycle they expand, beyond our wildest dreams, future possibilities. Who we think we are is changing. More of the mystery is being revealed. They say you can’t change the past but outside of linear time even that isn’t true. Timelines shift and change constantly and within them we can create in ways not possible when we ‘stick to the rules’! Simply casting the eye of the present over our past changes it, for we see in new ways and from fresh perspectives. We know ourselves now to be someone we hadn’t met then, and our present being places the past in its own particular light. Events may remain but their meaning changes and significance shifts as we uncover ever deeper layers of who and what we really are.

In Aquarius our minds are expanded and renewed. Outmoded mental paradigms can be released, unlocking unseen promise of future potentiality. Willingness to embrace the freshest of perspectives allows them to blossom into truth from a new dimension. We must live in full knowledge that what we see is but a fraction of what is, who we are a mere speck in the vastness of the cosmos and what we believe may be entirely wrong in every respect. This conjunction plugs us into the cosmic circuitry. It feels electrical, high voltage. It may blow a few fuses but that’s all part of the process. If we can’t take the current we must expand until we can. Dare to think new thoughts, contemplate the impossible, envision a fantastical future. Without doing so we cannot honour the potential of the coming months which will demand great things of us. As Jupiter triggers new perceptions and Saturn tests the validity of our perspective, rather than waiting for change we must be it. If we’re so invested in being right that truth has gone out the window, if we take refuge in false certainty to avoid the chaos of confusion, it’s time to up our game and trade conviction for the mystery, and certainty for a mind so open that nothing’s off the table!

The new age of which many speak is born through us. We do not arrive in it fully formed, nor find ourselves delivered through external intervention. Instead, we birth it from our own becoming. All things move towards evolution or entropy and both states live in this conjunction. Saturn in Aquarius can be stubborn and self-righteous. Unwilling to consider a different perspective, so sure of its own moral certainty. But Jupiter frees it from its moral prison to become a guiding source of wisdom not a stifling source of judgement and fear. Together they invite us to the very edge of consciousness before pushing us into the unknown abyss where all answers ultimately reside.

The Moon is travelling through the final degrees of the zodiac as this conjunction comes to exactitude. Void of Course in Pisces, it warns of the risks of complacency and denial. The stakes are high and nothing is set in stone. We are our own saviours. We must know this without doubt. For in that very knowing is found the sovereign self that fears nothing and no one – radiant, unsullied and free.

As we journey into 2021 this Great Conjunction will light our way. Whoever and whatever we believe ourselves to be is now, more than ever, open to question. We can re-invent ourselves afresh and choose a different future; cast aside the yoke of limiting belief and refuse to be diminished by endless fear. This is our time. Our beginning. Our birth into freedom and endless possibility.

From this single moment in the Solstice silence, we can all arise anew.

We have 1406 guests and no members online