A New Year And A New Way 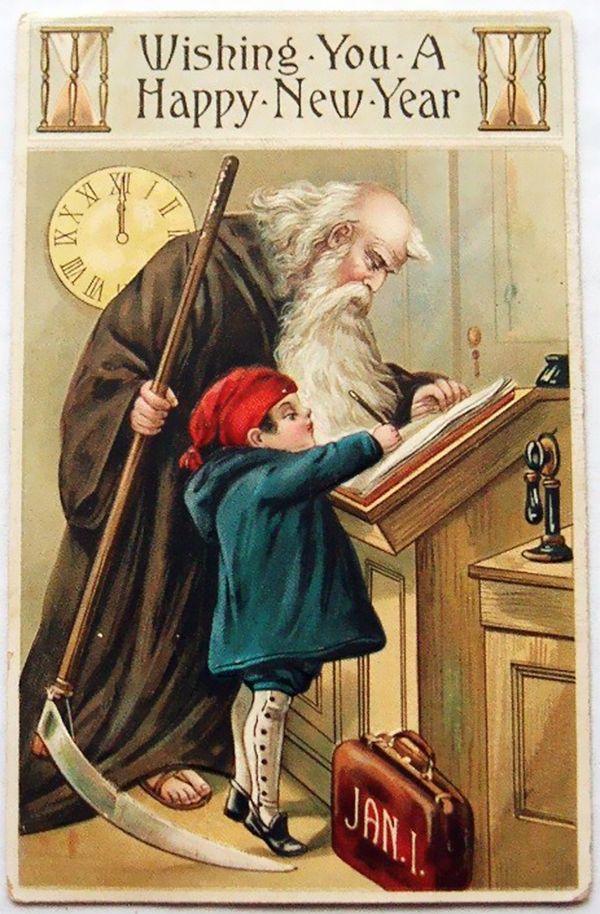 May we grow back, not to what was, but instead towards what we can become.

Father Time (an aspect of Chronos/Saturn, the ruling planet of Capricorn) is often portrayed with a scythe, sweeping away the vestiges of the year that was, and clearing the field the field for what will be. Hopefully in the process we also reap the harvest of our experiences, gaining some wisdom from the year that was. We stand here on the precipice between the Old Year and the New, wondering what the hell 2021 is going to bring after the year we just had. While we also can’t help but be wistfully hopeful, because how could things be any worse? I think many will be more than happy to see the back end of 2020 in their rear view mirrors as we march stalwartly forward into the new year to come.

January was named after the 2-faced god, Janus, the lord of beginnings, endings, transitions and time. He is portrayed with two faces, where one face looks back, while the other looks to the future. Janus presided over the doorways and the gates of Rome, and being the god of time, he also presided over the New Year. Capricorn, the sign that the Sun is in at this time of year, also is associated with space and time, with planning, foresight, goals, and the desire to achieve. May we clear out the vestiges of the year that was, in order to make room for seeds of hope, healing, and innovative solutions to restore us, not to what we were before, but for what we are to become.

In late June of last year, Mars first entered its own sign of fiery and feisty Aries. It usually spends about 2 months in a sign, but due to its retrograde phase last Fall (September - November), Mars spent an unusually lengthy time on its home turf, arming itself, building up steam and inciting fire storms (literal and figurative). On January 6th, Mars will finally enter Taurus, a vastly different sort of energy and environment for our warrior planet.

In Taurus, a sign of peace, Mars is required to leave his weapons and his attitude at the door. There is a vague element of surrender and withdrawal when Mars enters Taurus. We are ready to lay down our arms after a time of great contention and having to fight the good fight. It’s time to refortify ourselves, indulge our senses, and take stock of our resources. But don’t underestimate Mars in Taurus. Relentless, indefatigable, and untiring, Mars in Taurus is the long-distance runner who does not give up. Mars in Taurus does not generally like to fight, just so long as everyone does things their way. Stubborn to a fault, Mars in Taurus is there for the long haul.

Even if things look really really hard, and even if obstacles, and challenges seem so impossible to overcome, Mars in Taurus persists. When Mars is in Taurus we come to realize that even the smallest and meekest can be effective through single acts of resistance, and through indefatigable determination. So when Mars is in Taurus, nonetheless, we persist, often to the consternation of others, who are equally persistent.

What makes this transit of Mars into Taurus particularly significant now, is that once it enters Taurus it will square Jupiter and Saturn newly ensconced in Aquarius; and then on January 20th, will conjunct Uranus. As soon as Jupiter and Saturn entered Aquarius in December, the growing tension between these massive giants and Uranus was declared, and the gauntlet was thrown down. The prevailing transit for 2021 is going to be about this Saturn/Uranus square. And Mars is going to be a catalyst. Like a match ready to light the fuse, no matter what sign Mars is in, the combination of Mars/Uranus square  Jupiter/Saturn is going to be combustible. Perhaps even explosive. But what it can also be, is a catalyst for remarkable and progressive change.

As a preview: Mars will first square Saturn at the New Moon in Capricorn on January 13th; Then it will conjunct Uranus on January 20th; and square Jupiter on January 23rd. This is all going to reach a grand crescendo at the Full Moon on January 28th, when the Sun and Moon are joining the picture.

This week we are winding down with the waning Moon. Mercury is getting ready to make its own kind of mischief this week, as it passes by Pluto and squares Mars. Like that lull before the storm, you can feel the elements and the clouds all gathering on the horizon. Like messages of contention wafting on the winds, signs of discontent lurking in the tea leaves, we are on the edge of something new and different. And once we walk over to the other side, there is no turning back.

It’s OKAY to be scared. Being scared means you’re about to do something really, really brave. ~ Mandy Hale

2020 was an incredibly challenging year for so many, with ramifications on the global as well as the individual level. 2021 is going to be a transition year on so many levels. There will be change. And some will resist the changes that are inevitable. But also, due to necessity, we are learning to grow and adapt. As Jupiter and Saturn entered Aquarius, they not only poised themselves to form a square with Uranus, they are also now applying to sextiles with Chiron, our wounded healer. The first of these is the Jupiter/Chiron sextile on January 11th.

Sextiles present us with opportunities for self-improvement. We could totally ignore sextiles. There isn’t an urgency to these transits. But they are something we would want to take advantage of. Betwixt and between whatever mayhem may be brewing, the whole month of January also affords us the opportunity to connect with this Jupiter/Chiron sextile, which is strongest from now through the New Moon on the 13th.

What Jupiter sextile Chiron is especially good for: