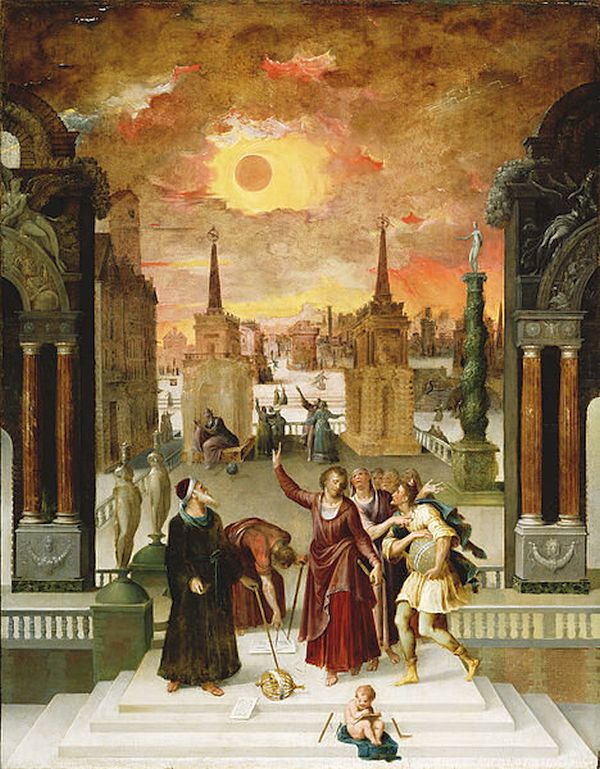 Turning and turning in the widening gyre, The falcon cannot hear the falconer; Things fall apart; the centre cannot hold; Mere anarchy is loosed upon the world, The blood-dimmed tide is loosed, and everywhere The ceremony of innocence is drowned; The best lack all conviction, while the worst Are full of passionate intensity. ~ W. B. Yeats

On Wednesday, May 26th, the Full Moon is also a Total Lunar Eclipse at 5º of Sagittarius. This Moon is also a Super Moon, meaning that the Eclipsed Moon occurs when the Moon is perigee, or at its closest point to the earth in its orbit. This will make this spectacular Blood Red Moon appear even larger than usual. It is the largest of the Super Full Moons this year. This is a fairly rare event (the last one occurred in 2015) that will be seen (weather permitting) in Hawaii, New Zealand, Australia and parts of southeast Asia. It will be seen partially in the western parts of the Americas. It will be a short but intense eclipse lasting less than 15 minutes, but should be wondrous to behold.

The best viewing times will be about 1:19 am in Hawaii on May 26th, and May 26th in Australia and New Zealand 8-11 pm. You can check for the exact time in your neck of the woods with the Time and Date website. If you live in these areas (or you know someone who does) and you have the opportunity to see it, do so! You won’t want to miss this one. It should be quite impressive and magical. The rest of us will be scrying and reflecting in the light and darkness of this vast and illuminating Full Moon, in which those things revealed have the capacity to completely alter our whole point of view.

The Eclipsed Full Moon makes a square to Jupiter, newly entered into Pisces, and standing at the crossroads of the Moon and the Sun, and the Nodes of the Moon. Like a sentinel standing at this cross quarter, Jupiter also stands at a threshold between the past and the future, the old and the new, what has been known, and what is yet to be. So it is with these eclipses that we stand in a liminal point in time and space, in which the past is future, and the future past; where karma unfolds inevitably, surely, and as it will. Full Moons are times of culmination, release, and revelation.

What we are releasing through the prism of the South Node in Sagittarius is hard to let go of. These are deeply learned beliefs ingrained in society, in our hearts, in our sacred and deep belief systems, in the very ancient part of our reactive brains and souls. These are difficult to look at, difficult to see objectively, interwoven with what we want to believe to be true. But once we become aware of these, once we see the truth, we can never go back again. So a new conscious awareness is possible, with new knowledge, and better understanding, but not without releasing some previously held assumptions.

The True can be visualized as a diamond with many facets. There is only one intrinsic Truth, but with so many and vast expressions, according to what we are capable of understanding and absorbing. Those facets may be seemingly quite different from one another colored by cultural attitudes, language and design. But they are all emanations of that one Truth. Occasionally, however, and over time the truth will become distorted, corrupted or manipulated. Sometimes deliberately. Other times due to our own attachments, fears and desires, we re-write the truth. Sometimes it is just easier to believe a comfortable lie, than it is an uncomfortable truth. This Super Flower Blood Moon of 2021 is trying to shift the narrative just enough so that even a glimpse of the Ultimate Truth can make itself known.

What needs to be released through the Full Moon Total Eclipse in Sagittarius:

Intolerance, prejudice and superiority: Sagittarius is a sign of the ‘Other’: other cultures, other nationalities, other religions and belief systems. What needs to be released is believing that your facet of the truth is the only truth, which you defend with a zealotry and absolute self-righteous certainty. This does not leave any room for growth. This sort of self-righteousness only seeds intolerance and prejudice. And leads to the false and dangerous notion that one group of people is some how superior and more deserving than another.

Blind faith and propaganda: Being told to believe something without question, without a body of proof, without any foundation. Or ‘because everyone else says so’. To be asked to believe something just because it has been repeated often and enough that it becomes this new form of ‘truth’ within the zeitgeist, even though there is no validity to it. At this juncture we are being asked to discriminate between propaganda, false brands, conspiracies, fables, fantasies vs. the truth. Make sure you have all the facts first, before jumping to conclusions, believing something just because it supports your side, or by assuming to have all the answers.

By releasing assumptions, false narratives and narrow minded beliefs that sow separatism, and prevent growth, it leaves more room for learning, to be open to other ideas, and possibilities. To become informed, and desire to want to learn more and know more. In this way, we keep on growing and ever evolving. It’s not as easy as it seems. Everyone thinks they’re right and everyone else is wrong. But to be willing to listen, even just a little bit. To be willing to change your perspective and your mind just enough. To find ways for all voices to be heard, to have a mutual dialogue, leads to a greater understanding of the whole truth, the whole diamond. Not just our own little facet of the gem.

Our assignment for this Eclipse season is to Learn something new:

Learn a new subject, take up a new hobby, attend a workshop, talk to your neighbors. Ask questions, explore your environment, be curious about others. That curiosity can take you places you’ve never been before. Go to a library. Read a newspaper. Open yourself up to your environment and the world of ideas. It will broaden your mind, allow you to make new friends, see things in a whole new way, and expand your world.

Most of this battle will be fought in a place you cannot go and you cannot touch: In the hearts and the minds of the people… Backstage. Yes backstage. That is where the real battle will happen. Everything else will just be flash and thunder. ~ Neil Gaiman (American Gods)

Even before the superlative Super Flower Total Lunar Eclipse Full Moon on Wednesday, Saturn will officially station for its retrograde phase on May 23rd. This is when planets appear to stand still from our perspective here on earth. With Saturn, these retrograde stations can often feel like obstacles, limits and boundaries that are strewn in our path, like so many hurdles needing to be overcome. These periods can even bring delays, feelings of rejection, deprivation or separation from what we want and/or need to achieve our goals. However, it also gives us permission to recognize and set our own limits, and to be willing to say No. Saturn will be in its retrograde phase from May 23rd thru October 10th this year.

What to expect from the retrograde phase of Saturn:

Just say No: We are given permission to say No More, to set appropriate Limits, and be clear to others and ourselves about where we need to cut back, leave or even withdraw. Sometimes we willingly relinquish those things that have become too burdensome. But it can also feel for some like things are being taken away, leaving us with feelings of deprivation, or separation from what we want and/or need.

Delays: It can feel like we have to take a few steps back before we can go forward again. Some will even feel as if they are stopped in their tracks. It may be that some very important details need to be sorted out first before we can then proceed. The past may come back to haunt us or taunt us. You may even feel like you have to take care of some things that you had thought already sorted out. But here they are again. Going over old ground again for good measure. Starting new ventures can be riddled with all sorts of delays and extra work if begun during this period. But if it is worth it, and you are up for the challenge, there is also so much to be learned.

Confronting our inner Saturn blocks: Confronting our own Fears, our attachments, and our resistance to change. Overcoming stagnation, avoidance, and procrastination. And allowing ourselves to let go of the need to be in Control. All that stuff that holds us back.

Cultivating our internal Saturn: Activities and experiences that foster or challenge us to develop self-discipline, self-restraint, organization, responsibility, a strong work ethic, self-respect, and being an example for others to follow. Saturn requires us to be Patient, and to think in the long term. Work or goals that requires us to focus on the details, perfect our skills and develop self-discipline and concentration are just what Saturn loves most. We might all ask ourselves: What long term goals or objectives that require a little extra self-discipline would I like to achieve over the next 5 months?

Dyonysius the Areopagite Converting the Pagan Philosophers by Antoine Caron

We have 1607 guests and no members online