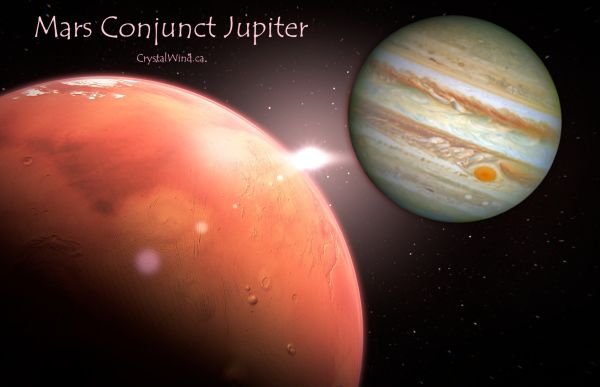 Mars conjuncts Jupiter on May 29 at 4 Aries. These conjunctions occur about every two years, and initiate a new set of truths, opportunities, and openings wherever they fall in our chart.

As I told you in Astrology in 2020-2021 – Mars Conjunct Jupiter at 23 Capricorn, the last Mars conjunct Jupiter began in March 2020 at 23 Capricorn. Since then, we’ve been in a time of receiving “rewards for bravery in battle” from accepting responsibility within some social or emotional group focus.

We have now experienced many expansions, truths, and protections in the house where 23 Capricorn falls in our charts. The one before that happened in January 2018 at 18 Scorpio, initiating a period of completion of old tasks and the transfiguration which happens after those completions. You can see how the expansions in our ability to find ourselves having done a job well between 2018 and 2020 would yield the rewards which have come between 2020 and now.

Think back on the house affairs activated by the one at 18 Scorpio and reflect on what opened for you in 2018 and 2019. Then see what opened for you in March of 2020 and now. By seeing the larger themes of how Mars and Jupiter opened doors and windows wherever they’ve conjuncted, we can see where we grew “by leaps and bounds.”

In 2015-2017, governed by the Mars/Jupiter conjunction at 15 Virgo, we “refined our cultural excellence,” saw how the material world and spiritual world are related to each other, learned to show restraint in “aristocratic” ways, and quickened ourselves, embracing “a reality higher or finer” than what we knew before. We learned what we cared about through the objects we value, and refined our “personal manner.”

In 2018-2019 we completed an old magnetism, desire, or attraction. Voids created new promise, but we also learned the futility of holding on to whatever we were struggling with. We expanded by letting go, purifying, and regenerating, whether by seeing how our life had transfigured in the previous 2 years, or seeing what we had to do well which would lead us to new transfigurations during the period just finished.

In 2020 and 2021 we began a new group work with new initiatives and duties in the house where it occurred. It brought us a time of recognition for doing our duty and being willing to do whatever we needed to do. We’ve all been opening to new social and emotional roles wherever we have 23 Capricorn in our charts.

Now we have initiated a new Mars-Jupiter cycle at 4 Aries, promising us all new initiatives and opportunities in the house where it occurs. This one will bring us freedom, enjoyment, and not so much attention to duty and responsibility as we’ve had these past two years. There is a promise of making much from little in the house where this conjunction happens these next two years.

As I pointed out in part one, this particular conjunction sets “an expansive pulse into motion” and with Mars in Aries, it rules this conjunction. Whereas the last conjunction was ruled by Pluto and happened on the same degree as the January 2020 conjunctions with Pluto, this one ruled by Mars will in some way have a common connection with the Mars/Jupiter in Scorpio, since Mars ruled that as well.

In general, Mars conjunct Jupiter fuses the influence related to houses and planets ruled by Aries, Scorpio, Sagittarius and Pisces. This fusion is focused through the house where we have 4 Aries.

This begins a time of major renewal and rebeginning for those born in the last 10 days of March. first 3 weeks of January. The coming cycle will bring together areas involving shared values and resources, social values, magnetism, self-awareness, truths, spiritual views, motives, and harvests, found through an expanded self-awareness.

It is a point of critical emergence for those born in the last 10 days of December. This cycle brings together areas involving goals, ambitions, profession, health, work, partnerships, resources, and siblings, playing out through home and family experiences.

For those born the last 10 days of September, this will be a time when partnerships and equality in relationships will be the focus. These will bring together areas involving values, resources, brothers, sisters, environment, health, work, and service playing out in the realm of relationships.

Those born in the last 10 days of June will have the emphasis completely in their public sector, with new professional opportunities arising out of the discipline and responsibility you’re shown before now. This will bring together areas involving honor, public visibility, creativity, children, health, work, higher truths, teaching, and travel, all playing out in the public eye.

In a slightly more focused way, those born in late January, late May, late July, and late November will find many harmonious, productive, and stabilizing activities over the next two years in the area this conjunction falls in the chart. There will be major adjustments and expansions through sacrifices for those born in late August and late October, and some unique gifts and circumstances for those born mid-January and early June.

Of course, if you’re not born during the times of the months I just mentioned, you also are highly affected, but in different ways than what I’ve just outlined. Entire generations with outer planets in certain parts of certain signs are also profoundly affected, but to go into all possibilities would be cumbersome here.

So check out the house it falls in and the aspects it makes to all your planets, since even those without a planet or point at 4 Aries can be profoundly affected. For example, in my chart the conjunction falls septile my Moon, novile my Venus, square my Uranus, and sesquisquare my Pluto. These indicate which parts of my life will be affected, and how.

It’s safe to say that everyone on Earth will be affected in important ways via the house in which it falls and the houses Mars and Jupiter rule in your charts. So take a look back at how you’ve been rewarded for fulfilling your duties “under abnormal circumstances” which is now lead you to this point, where we look forward to enjoying simply “being ourselves.”