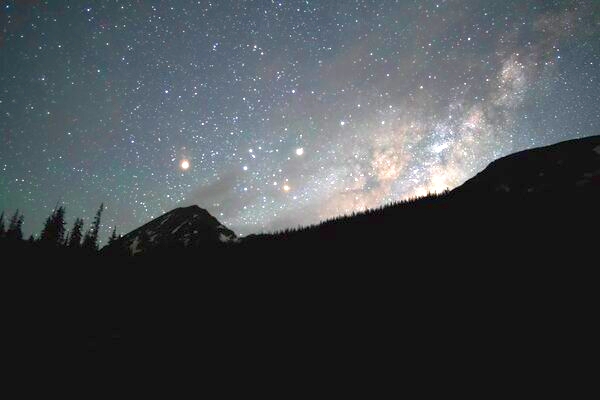 Right now we have a great light show in the evening just after sunset! After the Sun disappears, Venus is very bright on the western horizon, and elusive Mercury is just above it. And there’s more!

At this time, Venus is very prominent in the early evening western horizon with Mercury above it, far enough way to see but close enough to be a “twin star.” As we look above Mercury in the western sky we find reddish Mars, and above Mars, the Moon! So just after sunset we have four visible heavenly bodies, including Venus, Mercury, Mars, and the Moon! This arrangement won’t last long, as Mercury is slowing down about to go retrograde and disappear under the Sun’s beams.

Remember that at this time, all the planets are within about 180 degrees, or half the sky. This Bowl begins with Pluto and usually ends with Mars, but at this time the Moon completes the occupied signs. As the evening progresses, Venus and Mercury quickly sink below the horizon, leaving Mars and the Moon setting in the western sky in mid-evening. Because of where the planets are, we can only see Jupiter and Saturn in the eastern sky after about 1:30 am after the others have disappeared.

Anyway, enjoy the show, since it won’t last long. Of course, it’ll be replaced by another one in July, when we’ll have Venus and Mars as “twinned stars” on the western horizon after sunset with Saturn rising in the eastern horizon. After its retrograde, Mercury will be a morning star until it makes its next Superior conjunction with the Sun in August, when it will again be an evening star along with Venus.

In early September, we’ll have another light show comparable to the one going on now! Just after sunset, Mars will be low on the horizon, with Mercury, Moon, and Venus just above it in the western sky. Turning to the east, just above the eastern horizon we’ll see bright Jupiter, and above it Saturn. So at that time we’ll have ALL the visible planets above the horizon! That’s very rare.

Anyway, enjoy the light show these next few days, and remember there are intelligences “out there” which wait for our peaceful participation in the larger order of Life.