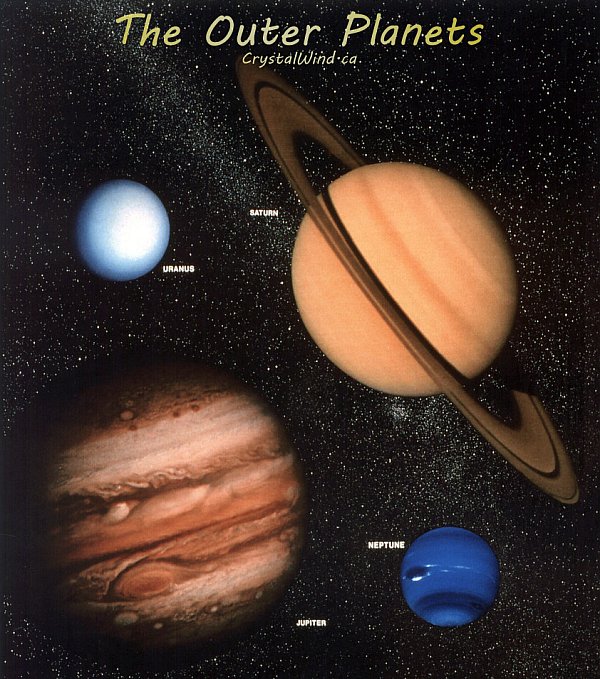 In the coming few years, Jupiter will make conjunctions with Pluto, Saturn, Neptune, and Uranus. These conjunctions set potential influences into long wave motion, but what actually triggers these outer planet conjunctions at specific points in time?

Whenever the planets from Jupiter out make conjunctions with those further out, these points mark endings and beginnings on a global scale. The lessons and changes associated with these are set into motion anew each time any of the inner planets crosses the outer conjunction points.

Obviously, the Sun, Mercury, and Venus make conjunctions with every planet outside their orbits, as well as all the planets in our charts, every year. These bring a new yearly cycle for areas governed by those planets. However, when Mars conjuncts any planet, it activates those energies for two years, and when Jupiter crosses a planet, it activates those energies for the next twelve years.

Each planet, as it transits the conjunction point, infuses the larger cycle pattern with its own energy which demonstrates the nature of that planet. The Sun vitalizes and illuminates whatever it touches. The Moon nurtures and gives form to whatever it touches. Mercury brings information, insights, and ways of coordinating our lives within the larger pattern.

Venus brings us things, people, and new appreciations within the larger pattern, while Mars energizes the process through spurring activity and when necessary, mobilize to "attack the problems." Jupiter's influence is much longer, and these conjunctions bring new expansion, teachings, and larger visions of truth to everything connected to whatever it touches.

Jupiter last conjuncted Pluto at 29 Sagittarius in late 2007. However, Mars didn't transit that point until December 2008. That indicates the vision developed, the seed forms expanded, and the transformational process was "dormant and potential" until triggered by Mars in late 2008.

That process was in full motion throughout 2009-2010. It was renewed, but in a different form, in December 2010 due to Mars again crossing that conjunction point in Sagittarius. That influenced 2011-2012. That Sag pattern of "getting in shape" renewed every two years since then, and will end with the early April 2020 Jupiter conjunct Pluto at 25 Capricorn.

The last time Jupiter conjuncted Neptune was 2009, when it happened 3 times; once at 26, 27, and 25 Aquarius. Mars transited that span in February 2011, January 2013, January 2015, December 2016, and November 2018. Each of these points in time renewed the Aquarian themes of the Jupiter-Neptune conjunctions, and gave a new way of expressing those energies.

The last major cycle set into motion involved the three Jupiter conjunctions with Uranus between June 2010 and January 2011. The first was at 1 Aries, the second was at 29 Pisces, and the third was at 28 Pisces. This cycle was first boosted by Mars moving through late Pisces and early Aries in late March and early April 2011. These themes took on a new application in March 2013, February 2015, January 2017, and late December 2018 and early January 2019.

So far we've dealt only with conjunctions beginning long cycles being activated by other conjunctions. The major turning points in these cycles are marked by the outer planets making significant angles to the conjunction points, but that is a very vast subject outside the scope of this article.

However, for those who want a hint at what this may yield, we'll note one important thing related to this line of inquiry. When Jupiter moved through late Pisces in 2010-2011, it made conjunctions with Uranus while also simultaneously making a waxing (lower) square to its 2007 conjunction point with Pluto.

Thus that time marked the threshold of an ending and beginning of a major Uranian cycle (due to the conjunctions), as well as the "first emergence" of the larger Galactic Center influences set into motion when Jupiter conjuncted Pluto at the end of Sagittarius. The current Jupiter transit of the Galactic Center now conjuncts the Pluto point of that Jupiter-Uranus square Pluto of 9 years ago, so we should be seeing manifestations related to those 2010 energies at this time.

Also, Uranus in mid-Pisces marked the midpoint of the last Uranus conjunct Pluto cycle begun in the mid-1960s when they conjuncted at 17-18 Virgo. Jupiter boosted that long wave Virgo cyclic energy numerous times since then, in 1968, 1979-80, 1991-92, 2003-04, and most recently September 2015 through August 2016. Saturn gave those mid-60s Virgo energies structure when it was in mid-Virgo in October 2008, and March-April and June-July 2009. During 2017-2019, we’ve had Neptune in that Pisces zone, bringing the Uranus conjunct Pluto energies to the surface in collective consciousness.

You can see there are many dimensions to what is happening at any given time, given the number of cycles set into motions in the past, some of which go back many, many years. The study of the interlocking cycles between the various planets is an area that will yield rich rewards for those who pursue it, since these larger transit to transit cycles are the means by which we can see the progress of societies and our world as a whole.

We have 1381 guests and no members online