Jupiter Conjunct Neptune in Pisces in March, April, and May 2022

Jupiter Conjunct Neptune in Pisces in March, April, and May 2022 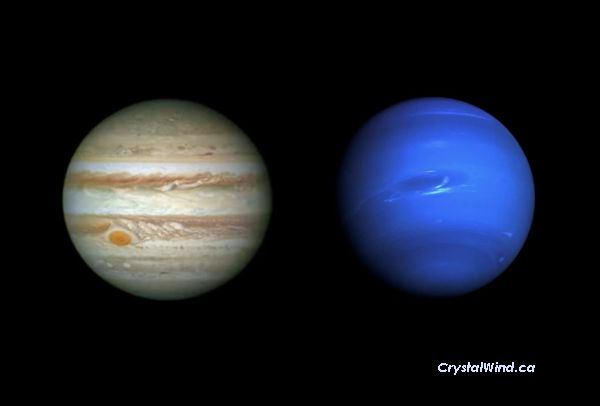 Whenever Jupiter conjuncts a planet, whether in the sky or in our charts, it sets a 13 year cycle into motion. Obviously this affects the affairs of the house in which the conjunction falls, as well as the houses ruled by whatever planet Jupiter touches. This brings expansion, openings, opportunities, and possibilities to these areas.

Obviously, a major factor to these conjunctions is what sign these conjunctions fall in. This is as true for the transit to transit conjunctions as it is in our individual charts. Today we'll explore what this ongoing conjunction in Pisces could symbolize, since the sign is the filter through which the planetary energies work their function.

Jupiter moves through each sign once every 12 years, bringing expansion, teachings, and larger visions of truth to everything connected to that sign. The last cycle began with their conjunction in Aquarius, the sign of Angels, world servants, group work, and the higher ideals of humanity, and since then we’ve all explored higher altruistic, idealistic energies.

The past cycle was notable, because it was the first time Jupiter conjuncted Neptune in Aquarius since 1843. That cycle began a period of new vision, new humanitarian and reform movements, and an overall expansionist atmosphere. Taking a look back at what’s happened since 2009, we can infer that this past 13 years was one of imparting future visions to humanity as well as to individuals, since Jupiter conjuncted Neptune three times in the last third of Aquarius in 2009. Those conjunctions set an Aquarian energy into motion through 2163, when the conjunction is again in early Aquarius. To note, that will be a short cycle, since Jupiter again conjuncts Neptune in 2176 at 30 Aquarius.

The reason this article's title only concerns itself with the months through May is that these months show the forward span of Jupiter's movement through Pisces, after which it enters Aries. Though the cycle to come will be Piscean in nature, once Jupiter enters Aries there will be a quickening which is much different than Jupiter in Pisces!

This is the only conjunction Jupiter makes with Neptune, since it will only retrograde back to 29 Pisces by the end of the year before going direct and quickly entering Aries, racing through that sign to enter Taurus in May 2023. And because Neptune will leave Pisces before the next Jupiter/Neptune conjunction at 22 Aries in March 2035, this is the only time Jupiter has conjuncted Neptune in Pisces since 1856 at 19 Pisces, with the next one at 6 Pisces in 2342.

Obviously this conjunction at 24 Pisces will affect planets we have in late Pisces, bringing renewal of possibilities of that planetary function and opening a 12 year adventure of exploring how to expand those planetary energies. The degrees involved may shed light upon how these expansion energies will demonstrate.

The Sabian Symbol for this Conjunction

As this symbol sets the tone in collective consciousness for the next 13 years, let’s take a look at it to see if we can anticipate future developments. The Sabian Symbol we’ve been given for the 24th degree of Pisces is "An inhabited island.” In the original notes from the Marc Jones class on the symbols published in The Astrology of Personality, Rudhyar says this is a degree of “Centralization of supernal forces,” “adaptability and inherent creativeness of man,” and “Extreme of surety in self-expression.”

In the Astrological Mandala, he states the keynote is "the need to consciously accept one’s own personal limitations in order to concentrate one’s energies and to live a centered and fulfilled life.” He notes that this symbol is one of expanding ego-boundaries so they become “a zone of intense interchange between the inner and the outer, between the individual and the community, between man and the universe.” He speaks of the need to fulfill Dharma, or the “place and function in a vaster whole.” He says it falls in the span of Protection, and it’s the technical degree of the emotional, social, and cultural level of the Scene of Perpetuation in the Act of Capitalization.

Dr. Marc E. Jones, creator of the Sabian Symbols, states that here we can demonstrate our "gift for the organization of (our) own private world in any area of (our) special interest." Here we learn about our ability to "function in a complete independence of the alien or the unfriendly" and "develop adequate resources for (our) need" even in "barren situations."

This is a phase of capitalizing on potential and coax it to fruition. He offers us the keyword CULTIVATION, and says when operating in a positive manner, this degree is "achievement through a creative opportunism or inventiveness of exceptional order."

So the specific theme of the next 13 years involves interchanges between us and the visible and invisible world around us, where we learn “centralization.” Here our ego-function “sets boundaries” and shows our unique character, where we learn our oneness within a larger whole.

This involves techniques of emotional, social, and cultural perpetuation of deep and vast feelings and the distributive water that Pisces symbolizes. Being the third decan of Pisces, this one is “the end of the end,” a place both deep and boundlessly wide where dark things lurk at the edge of the fog. This is the Scorpio decan with an additional dose of Mars, so everything is totally future oriented even as ancient things are released at the end of the cycle of experience. Humanity has a lot of ghosts to confront and a lot of forgiveness to practice to come to the compassion that represents the best of this phase of experience.

We've been given the ability to sense these energies within collective consciousness due to Neptune occupying this span for the past year. Jupiter will now bring teachings, visions, truths, and adventures connected to these. It promises a new collective atmosphere, where we can grow into a wider, larger more compassionate view and function based in what house it falls in.

It will be a very dynamic influences for those born in mid-March, mid-June, mid-September, and mid-December, as well as people born with Jupiter, Saturn, Uranus, or Neptune in the latter part of Gemini, Virgo, Sagittarius, and Pisces. There will be others who are also very powerfully affected by this conjunction, of course, but a detailed list of all those affected are too numerous to list here.

So onward through the Dreamscape, where we can swim in universal consciousness and feel all there is to feel across space and time. We are all sparks of Light within an infinite field of Light, and we’re all connected to all Life here and now. This begins the building of a new dream while saying goodbye to any sense of separateness. Over the next 12 years we will learn to feel that we are all one together.