Kamala Harris and the Pallas Archetype 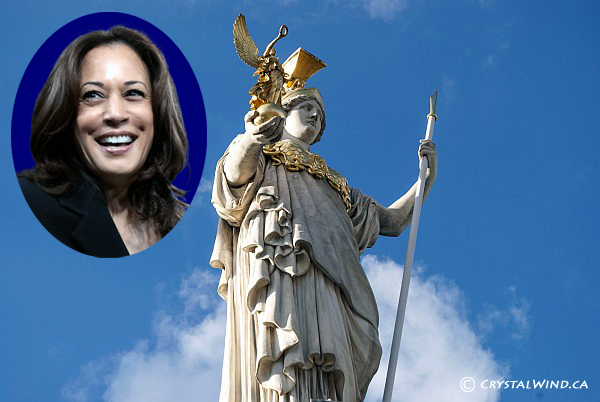 As I enter into writing this blog today, I am aware of a great sense of lightness, relief and joy that has immersed me since the USA elections. A fair few of my British friends have said how they never have felt so invested in the outcome of an election in another country before.

Today I felt inspired to have a look at the incoming US Vice President Kamala Harris’s birth chart and especially in relation to Pallas Athena, but actually she has some very interesting other Goddess activity going on too, so read on.

If you have been following the dramatic Pluto, Saturn and Jupiter conjunction this year in Capricorn, you will know that astrologer’s worldwide predicted the crumbling of global institutions, but I don’t think any of us realized the scope this would take with the Corona Virus Pandemic. In there with these ‘big boy’ planets has been Pallas Athena as the emerging archetype likely to occupy the highest frequency within humanity in co-creation with the Divine forces of Justice and Grace.

In this past week Pallas has come into exact conjunction, first with Saturn and then Jupiter at 22 Capricorn before launching herself to the front of the pack. Kamala Harris as Vice-president is a clear and undeniable manifestation of this new energy right there in what we might consider our modern-day Mount Olympus – the White House. 22 is a number associated with the Feminine Christ Consciousness and Grace so it feels like a very positive energy breaking through. It actually happened in Gene Key 43 and the i Ching Hexagram for that key is ‘Breakthrough’. I had the feeling of us being birthed out of a very tight and tense bottleneck as a species.

One of the predictions I made a few years ago, being an Astrologer mainly focused on the first 6 Goddess Asteroids discovered, is that they would manifest themselves through the increasing status of women but especially women of color in the world. 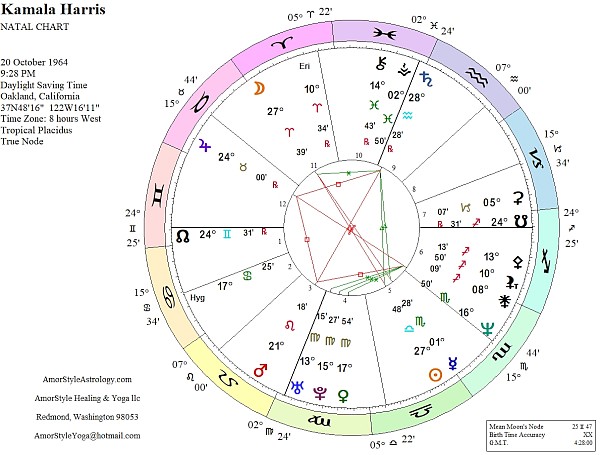 Kamala Harris is remarkable and must be a woman of great inner strength and independence to have made it so far in politics and smashed through the glass ceiling especially for women of color. For those readers who may not know, her Mother was from India and her Father Jamaica so she brings some interesting ancestral lineages and her presence alone will be a welcome boost to the Black Lives Matters movement. The fact Joe Biden chose her as his Vice shows his commitment to this important cause – because without full equality in the world we cannot grow and blossom into our true potential as human beings. Systemic racism is hard to break because the current structures of the world actually depend on inequality in some form, so we can’t just leave it up to a few good people at the top. If we want to evolve questioning some of our most ingrained way of thinking must be challenged. This is really the essence of the Aquarian impulse towards equality.

Kamala has her Pallas Athena in the fiery and intelligent sign of Sagittarius and conjunct the Galactic Attractor and Juno. This is a woman with a vision expressing in fact very simple ideas, but ones sorely needed to heal our world. At the mythical level Pallas Athena didn’t marry and preferred to stand alone. Also, in her shadow aspect she is the feminine counterpart who chooses to prop up the patriarchy and dishonor the feminine within herself and others. Metis is the invisible Mother of Pallas Athena, but Zeus feared the prophecy that Pallas would destroy him and swallowed her whole. Metis created a lot of loud noise and so eventually Pallas popped out of Zeus head because he couldn’t bear the white noise.

So how much will Kamala support the old structures of inequality or how far will she push for a liberation agenda for women and people of color? In terms of the mythology its very pleasing that she thanks her own Mother, now past, for her success thus showing her honoring of her own Mother. This immediately launches Pallas into her higher frequency bandwidth. In my research on Kamala I believe she only got married in 2014, so it seems she waited to find the right man who hopefully respects and loves her for who she is as such a power house of a woman. With Juno conjunct Pallas it brings the Sacred Lover or Wife and the Warrior Woman of independence together into wholeness which is also very positive.

Pallas is in a challenging T-square to Chiron in Pisces and also Uranus, Pluto and Venus in Virgo. The Pluto Uranus conjunction in the 1960’s when Kamala was born triggered many revolutionary movements for liberation, and the increased dynamic towards women’s rights as well. It was a time when a new seed of freedom was planted. As Kamala has Venus conjunct Pluto and Uranus we can expect in her personal and work life she has had to meet the challenge of oppression and dominance head on. There is a strong revolutionary current running through her directly connected with her Venus energy.

The presence of Chiron suggests her path has been one of healing her own ancestral wounds. Chiron falls in the 10th house of career opposing Pluto, Uranus Venus in the fourth house of family, so we can tell from this that she has had internal challenges to overcome to get where she is. This I feel is very positive because it gives her potentially compassion for others who are facing struggle. In an article I read about Joe Biden I heard he lost his wife and child, and so he is someone known for his empathy. Together with Chiron in the 10th house she may well be instrumental in a greater healing of the USA and its fragmented identity. Could this identity move from militaristic nationalism to being global leaders of a new era of peace and transformation for humanity? I pray it will be so.

What is also intriguing is that Kamala has Vesta, Saturn and Astraea conjunct her mid-heaven the path of career. This is an excellent placement for Saturn in a civic position of power in the sign of Aquarius. As Saturn is due to enter Aquarius again very soon this will enhance her capacity to build new forms, with the support of others, and to govern with equality at heart. It also gives her that much needed quality in politics of perseverance. The presence of Vesta and Astraea are very special because it suggests she is also bringing energies that will mark the beginning of the Golden Age when we look back at history and particular events. I think this election will be seen as a major turning point towards the light.

Vesta brings strong qualities of sovereignty and of following your inner authority which is perhaps the most crucial quality we need as humanity to step out of being manipulated by those in authority. Astraea brings in a quality of culture, beauty and refinement. I doubt we will see Kamala mouthing off in Congress – this is a woman who will use words in an artful and sophisticated way.

What is most delightful about Kamala’s chart is that she has no less than 6 sextiles which are positive aspects. I’ve never seen a chart with so many in my 25 years of practicing astrology. If you want to support Kamala every time you think of her vision a glowing 6 pointed star made of all these sextiles… its quite stunning and will be powerfully echoed this Winter Solstice and Christmas by what is going on in the heavens. Looking deeper I see she has three Grand Trines which are the most positive aspects you can have in a chart. It shows somebody with a superabundance of blessings and gifts and let’s pray in her new role more of them will blossom. For those who love detail the trines are:

Kamala was born under a Full Moon in Aries and also her North Node, path of destiny is conjunct her Ascendant in Gemini so she is somebody whose destiny has been strongly calling. She was born on the 20th October 1964 at 21.28 in Oakland, California.

Although I am so happy about her presence soon to be in the White House, I feel also to say that in the Age of Aquarius this big transformation of society is about all of us and the more we continue to transmute our individual shadows the more breakthrough’s in issues like systemic racism and sexism can be addressed at the level that brings real change for people on the ground.

We have 1751 guests and no members online