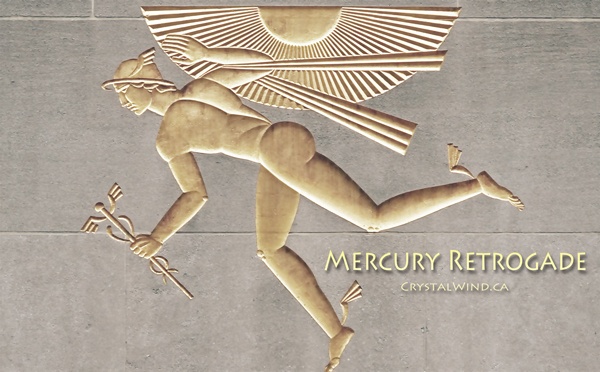 Because Mercury is already slowing to retrograde, we’re already experiencing the retrograde effect. Because this happens 3 or 4 times each year, let’s take a new look at "Mercury Retrograde."

One of the first things I heard about when first learning astrology was the dreaded “Mercury retrograde,” supposedly the cause of ten thousand miscommunications and things breaking down or not happening as expected. That’s why after many years of study and practice, I wrote the first major book on Mercury retrograde.

As usual, as the retrograde station draws near I'll be doing my usual series of articles on the themes of the retrograde, what it means both in general and specifically, how it affects each sign, and how it relates to past Mercury retrograde themes.

I reprint this article from time to time since it contains core material for those who want to understand more about this event happening several times a year. The subject of Mercury retrograde is so full of superstitions that I originally wrote this article as a reference point for a sane examination of this recurring phenomenon so people know what good they can do rather than just feel dread. The material in this article is not from my book, so it stands on its own, augmenting the book.

Here's the link to the page where you can purchase a paperback edition of A New Look at Mercury Retrograde. or the ebook from Kindle. If you’re ordering a paperback on Amazon, make sure you're ordering the 2015 edition with the award on the cover, and not the earlier one. There are plenty of used copies of the first edition for sale, but they are far inferior to the newest edition. And if you leave a review, please make sure it’s for the 2015 edition.

There are a lot of myths, suppositions, and confusion about Mercury retrograde. I have found there are many things we can achieve during these periods occurring three or four times a year. Since Mercury is the Cosmic Magician, the Trickster, and was regarded for eons as “The Guide of Souls,” Mercury retrograde periods are great times to examine the Cosmic Magician and figure out some things that are not evident or may be obscured when Mercury is direct in motion.

While it seems as though Mercury retrograde is associated with miscommunications, delays, and things which malfunction, we must remember no planet or its influence is good or bad unto itself. We are the ones who determine our "destiny," based on our choices, which shape our character. In that sense, "character is destiny," and our only need in each moment is to determine whether we will be active or passive in responding in a consciously positive way to life’s challenges.

Mercury retrograde has been with us, and will be with us for a long, long, time, as long as the planets have their present orbits around the Sun. These periods of learning to take a retrograde view, or learn from a retrograde view, are a natural part of the fabric of Time. We were born within the larger Timestream, and throughout our lives are learning how to deal with the fluxes of Time and perception.

Learning how to adapt to Mercury retrograde’s requirements allows us not to get disoriented, bogged down, or deflected during these periods. We may experience delays, deflections, or unexpected things which divert our energies (which also happen when Mercury is not retrograde), but all of these show us that we do not have to have a bad or confused attitude while dealing with these the best we are able. A retrograde simply means we need to take a different view than our normal one. When “the Guide of Souls” slows down, we may just get glimpses of our higher Path to personal perfection.

Throughout our lives we are offered chances to learn to use Mercury retrograde wisely and consciously. Even if our affairs are momentarily diverted in strange directions, coordinated in some unusual ways, or take some peculiar twists and turns, if they’re part of our need to learn or accomplish something, they often turn out for the best over the long run, whether we knew that or not during the retrograde period. Often we get useful information and insights which we overlooked before the retrograde, and these times help us factor in different pieces of our life's puzzles so we can operate more effectively after the retrograde period ends.