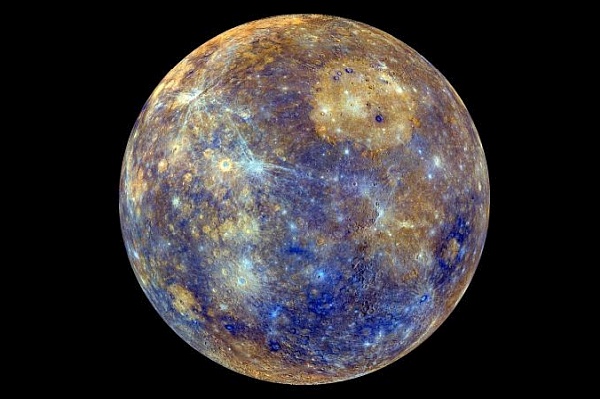 Mercury retrograde is generally associated with communication and technology breakdowns, nervous anxiety, travel delays, and lost items. Mercury retrograde January 2021 is not much different but aligned with asteroid Damocles it may add more stress and a sense of vulnerability.

Mercury enters the retrograde zone on Friday, January 15, 2021, at 11°01′ Aquarius [see chart]. During the first shadow period, you will get an idea of the thinking, communication, or transport issues that will arise during the retrograde phase.

Mercury stationary retrograde on Saturday, January 30, 2021, at 26°29′ Aquarius. The chart below shows Mercury retrograde opposite the Moon but this is a very weak aspect with an orb of over 8°.

There are no major fixed stars conjunct Mercury retrograde January 2021 but there is an interesting asteroid worth considering. 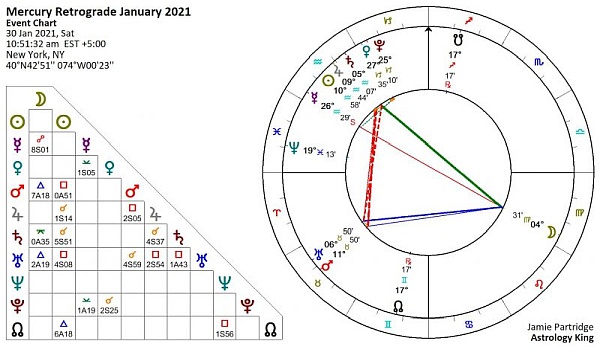 Moon opposite Mercury will not have a strong influence but it could make it harder to understand your feelings and to share them. Some confusion and stress are possible and it may become more difficult to relax.

Spending some quiet time in reflection may help you understand your feelings and also help you relax. Or you could talk with a counselor or mentor about any feelings or attitudes that you sense are holding you back.

At 26°04′ Aquarius, asteroid Damocles (5335) is conjunct Mercury retrograde January 2021 by 0°25′. The asteroid was named after a courtier in the court of Dionysius II of Syracuse, a 4th-century BC ruler of Syracuse, Sicily.

Damocles was pandering to king Dionysius, saying how lucky he was to have so much power and wealth. So the king switched places with Damocles and hung a sword above the throne by a single hair of a horse’s tail.

Dionysius committed many cruelties in his rise to power and made many enemies. The “Sword of Damocles” evoked the sense of always having to watch in fear and anxiety against dangers that might try to overtake him. It is an allusion to the imminent and ever-present peril faced by those in positions of power.

“Damocles Syndrome” refers to the unique fear that cancer survivors have of relapse, despite recent advances in treatments and cures. Like Damocles, they feel the stress of the sword constantly hanging over their heads, never knowing if, or when, it would fall upon them.

Astrologically, Damocles represents a high level of stress and vulnerability related to a feeling that something terrible is going to happen. This seems appropriate for Mercury retrograde 2021 with the ongoing fear created by the coronavirus pandemic and the dangerous new mutations.

Find Asteroid Damolces in Your Chart

We have 1586 guests and no members online