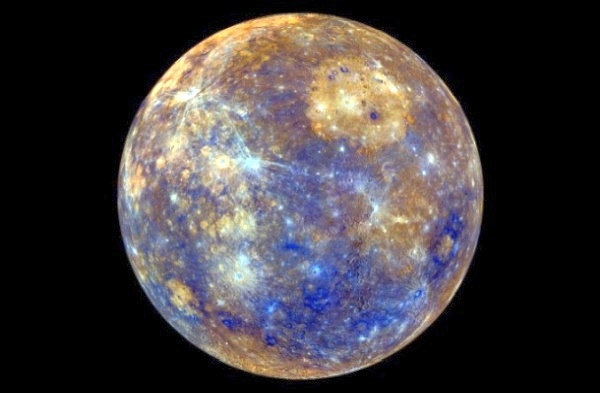 Mercury retrograde is generally associated with communication and technology breakdowns, nervous anxiety, travel delays, and lost items. But Mercury retrograde September 2021 is more positive than usual because it aligns with the two most fortunate of all fixed stars, bringing success, renown, riches, honors and fame.

Mercury enters the retrograde zone on Monday, September 6, 2021, at 10°07′ Libra [see chart]. During the first shadow period, you will get an idea of the thinking, communication, or transport issues that will arise during the retrograde phase.

Mercury stations retrograde on Monday, September 27, 2021 at 25°28′ Libra. As the chart below shows, Mercury  makes a positive trine aspect to Jupiter and a testing square aspect to Pluto. Jupiter semisextile Pluto makes this an overal positive configuration. And Mercury stationing direct on the two most fortunate of fixed stars definitely makes this a positive retrograde phase. 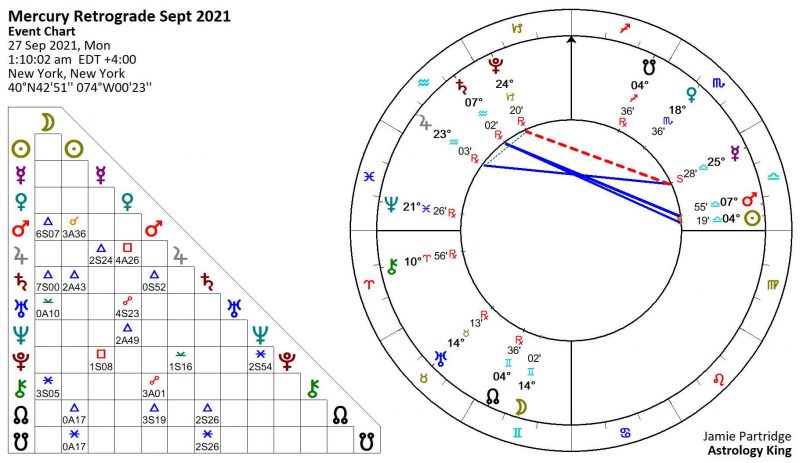 This is also a good time for setting off on a journey, especially long-distance travel. Making friends comes easy and mutually beneficial partnerships can prove profitable in the future. Business dealings should go well and this is the ideal time for entering into negotiations and for signing contracts. However, the fixed stars conjunct Mercury suggests caution is needed with legal matters.

Mercury square Pluto is a more challenging influence that brings deep thinking and intense interactions with others. This is a good influence for research and investigations, but extremism or and conspiracy theories should be avoided. The more extreme your idea, or the more force you use to convince others, the more criticism, arguments, and conflict you will meet.

You may become defensive but it is important not to let your fighting spirit back you into a corner and complicate matters. Mercury trine Jupiter helps you keep an open mind instead of arguing for the sake of it. This can lead to a positive transformation of your intellect and communication style.

Jupiter semisextile Pluto helps you to transform the intense and dark thinking of Mercury square Puto into a more positive outlook with Mercury trine Jupiter. Powerful forces are working behind the scenes to promote you to a higher level. Increased power and influence, spiritual and personal growth, wealth creation, and professional advancement are possible.

Mercury stations retrograde is in the Sign of Libra. But as the star map below shows, it is in the Constellation of Virgo. This is because the precession of the equinoxes has moved the Sun Signs almost a whole Sign out of alignment with the Constellations from which they were named, over 2000 years ago. 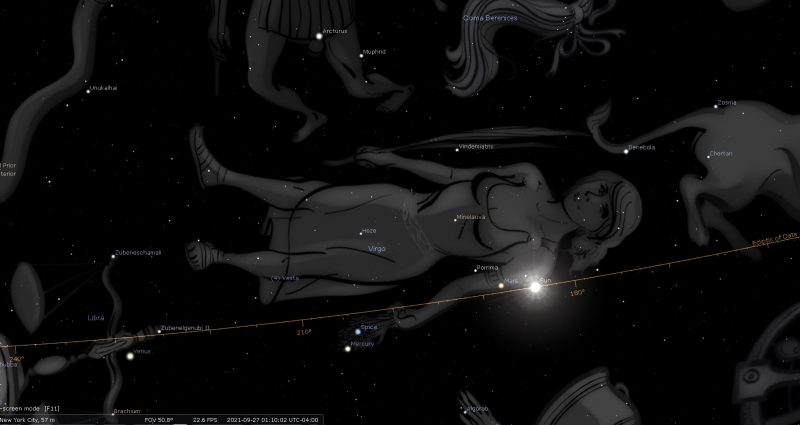 This star has a reputation for achieving justice through power. It, therefore, makes the native belligerent and quarrelsome. An enterprising spirit is here the rule. Lasting success is promised if further good aspects are present (yes, trine Jupiter). If critically aspected (also yes, square Pluto), the good influence will be hampered or made into a real handicap. If involved in legal action, such a native may lose all. [2]

Mercury stations direct on Monday, October 18, 2021, at 10°07′ Libra. It is very well-aspected, with a sextile to Venus and trine to Saturn. However, the fixed stars are more challenging than those for Mercury stationary retrograde. 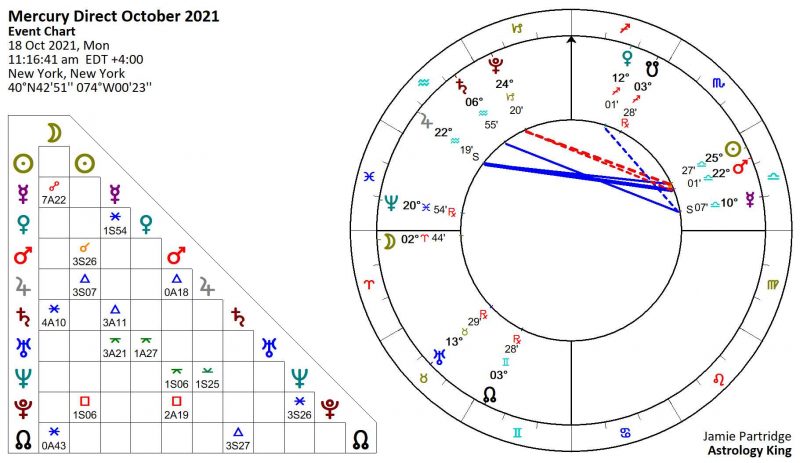 Mercury sextile Venus gives charm and a smooth communication style that make this a time of love, friendship and diplomacy. You can bring people together and encourage cooperation. Mercury direct is a good time to find peaceful settlements to disputes and break down any barriers to progress. Buying, selling, and negotiating benefit from your good head for numbers and the ability to find win-win situations. This is also a good time to ask for favors.

Mercury trine Saturn brings the persistence and perseverance to complete difficult and long term projects. Good concentration, common sense, and a methodical approach help you make important decisions. New friendships and partnerships should be lasting and dependable. This should be a good time to negotiate business deals and sign contracts, especially in real estate. 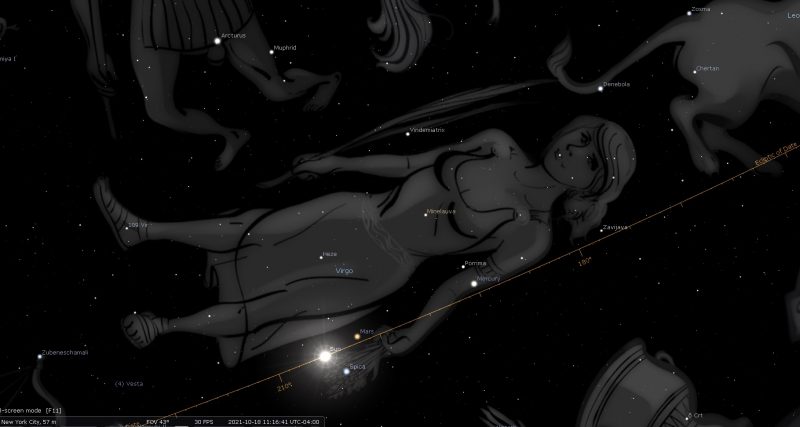 Notice that the Sun and Mars are close to the degree of Mercury stationary retrograde, and both conjunct fixed stars Spica and Arcturus, and both trine Jupiter and square Pluto. This reinforces the beneficial influence of the whole retrograde cycle. Notice also, that Mars in the Mercury retrograde chart is close to the degree of Mercury stationaty direct, and the stars Porrima and Vindemiatirx.

In general, Vindemiatrix gives falsity, disgrace, stealing, wanton folly and often causes its natives to become widows. [1] Vindemiatrix figures strongly and regularly in deaths which are in some way dramatic, newsworthy or are resented in much more than the usual degree by those left behind (assassinations, common criminal murders, executions, airline disasters, etc.) May become a missionary or at least feel a strong religious calling. [3]

When any planet energizes this degree, there is a fear within these individuals that they will lose their partner. Through their own fear, they project the loss. They are given the opportunity to work with this fear and to release it. If not released from the subconscious level, the fear they carry will materialize and they become widowed. [4]

In general, Porrima gives a courteous, refined and lovable character with prophetic instincts. [1]

We have 1208 guests and no members online