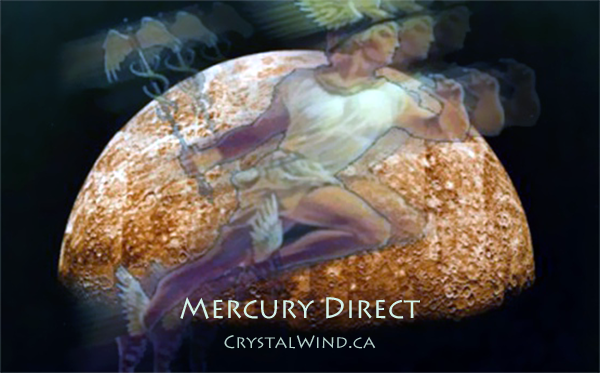 Mercury goes direct in motion at 11:12 am PST, 7:12 pm GMT on November 20, and speeds up for the next 10 weeks. This shows a quickening of the ability to coordinate, put things together, understand the whole and the parts, the process and the larger cycles. It is now stationary at 12 Scorpio, affecting that area in our lives for 3 months to come.

Mercury, or Hermes, "the Guide of Souls," is also known as the Divine Trickster, as well as all lesser models. What does Mercury going stationary direct at 12 Scorpio hold for us? Perhaps it would be useful to take a look back on what the last Mercury direct station brought us since early August 2019.

You will recall that the last time Mercury went stationary direct in August, it was at 24 Cancer, indicating we’ve been in a time of focusing “complex inner potentialities in harmonic and concrete relationships.” We’ve been learning interdependence, whether between our inner parts of Being or outer functions of doing. We’ve all been practicing techniques of personality integration on the emotion or social levels of existence.

As as this is the third direct station in Water this year, we have now come to a place where the “social rebirth” and forgiveness practices indicated at the March SD at 17 Pisces which took shape as the beginning of the “social integration” period since August has now brought us to a place where we may relate to people on a much higher level than even a few months ago.

This retrograde period began at 28 Scorpio, helping us review our “allegiance to the One” holding everything together we began to experience when Mercury went SD on that degree in December 2018. We’ve taken a look back at what we could and couldn’t hold on to in the past, and are aware of what holds things together in the present. From here we move forward into a new expression of Scorpio energy in our lives.

We’ve now re-traced ground that we first saw via Mercury’s first pass from Oct 11 through Oct 31, and re-examined via the RX from then to now. Of major importance will be when Mercury goes back over 28 Scorpio on December 7, when it moves into unknown zones, carrying all its RX lessons forward until its March 2020 RX.

Now we face 4 months of being guided to our Soul using the qualities of 12 Scorpio. How we use those realizations to coordinate the qualities of that degree into our lives over the next 4 months will show us a different way of shaping our minds to become more receptive to current and future new qualities of Being.

Reflect on recent redirection of energies leading you to a new sense of loyalty, allegiance, or inner connectivity. Find a new approach to what you can and cannot attract and the relationships which call you to a higher level of relating. Find new ways of expressing your individual magnetism in evolved relationships. All of this involves seeing how your “level of accomplishment” is being recognized as per the Sabian Symbol of the SD degree.

We should all start seeing, hearing, and understanding things that point the way to some Mercurial fulfillment related to how we have been and continue to be guided to our Soul. Given that it falls at 12 Scorpio, it has qualities of rewards for individual excellence in social situation wherever this SD degree falls in our charts.

The Sabian symbol for the 12th degree of Scorpio is "An embassy ball.” In the original notes from the Marc Jones class on the symbols he published in The Astrology of Personality, Rudhyar says this degree is one of “social recognition of accomplishment as the substance of a ritual of human association,” “certification of rank,” and “ambition.”

In his Astrological Mandala he states this degree is one of “Group-consciousness, as it flowers at the highest level in cultural interchanges between representatives of the elite of the ruling class.” He says this degree requires that we meet other people “at the highest possible level of cultural interplay… rather than with an everyday type of consciousness and behavior.” He says it falls in the Span of Retention, and is the counterpoint degree of the individual, mental, and spiritual level of the Scene of Communion in the Act of Group Integration.

Dr. Jones says this degree is about imagination as a great “effective corrective” to get ourselves on track, where we can examine our loyalties to see if they are bringing us “the self-fulfillment to which (we) aspire.” He says this deals with the “practical values of life,” and involves “the political organization of society as either a consummation or exploitation of personal potentialities.”

He offers the keyword of DISPLAY. He states that when this degree works positively, it is “an absolute stability of self as a contribution to group integrity.”

This degree involves faith, magnetism, deeper connectedness, spiritual sensitivity, universality, and sustaining ideals. All of this means the theme of the coming weeks involves figuring out whether our loyalties need adjusting or not based in the level of our interactions, and not be too stiff nor casual in certain social situations when a certain type of classy “formality” is the best way to be.

On a related note, this degree was extraordinarily important in two different long term events that happened in 2013. First, Saturn went stationary retrograde on this degree in early 2013, marking a threshold of “wisdom training” involving the themes of this degree. Second, this is the degree of the Solar Eclipse in November 2013 which had effects lasting for 40 months after that time.

While Saturn made it clear a new way of relating to others had to be accepted, the Solar Eclipse ensured all that would hinder that was eliminated or ended. I suppose we can infer that these provided us the structure as well as the space for our current focus on being our best in social situations and meeting others at a higher level of cultural interaction. In short, we’ve learned some ways, and now are in our next “Master’s class” in how to come out of commonplace, “too familiar” and “everyday” ways of relating to others while conducting ourselves at the highest level of dignity and respect, both for self and others.

We’ll close today with a reminder that although Mercury is now direct and won’t be retrograde again until mid-March 2020, the retrograde we’ve just experienced will affect the coming months until the next Mercury stationary retrograde at 13 Pisces. As this retrograde began at 28 Scorpio, it may be useful to consult the Mercury SD articles posted in early December 2018 as well as the articles I posted 3 weeks ago. They’re all in the archives

Of course you can find out more about past, present, or future retrogrades by getting your copy of my book A New Look At Mercury Retrograde.

In part 2, we'll continue to examine what we can expect over the next 3 months now that Mercury is direct.

You Absolutely Can Tackle the Big Things You’ve Been Avoiding

We have 698 guests and no members online