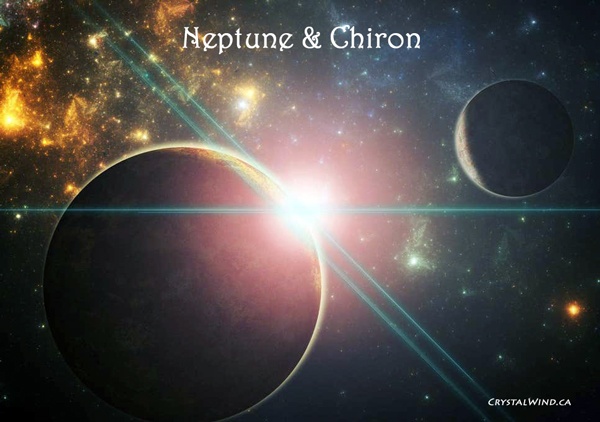 I have offered this segment in each month’s New Moon series for many years to give you a broader perspective on the collective atmosphere, and the long wave changes humanity is going through. I’ve decided to make this an independent post which I’ll link to in the future. These two planets have to do with a VERY vast picture of collective consciousness and the energies needed to “heal into our Higher Self.” Today we’ll discuss what’s up and what’s coming.

Neptune and Chiron in Aquarius, Pisces, and Aries – The Big Picture

Because Neptune has been in Pisces for about 8 years, we’ve been navigating through the threshold of an entirely new era which will not resemble the old Age in any way within just a few decades. We’re already solidly in the Dreamscape, with a lot of delusion and confusion as many old things end while we learn to maneuver the foggy field.

The transition from Neptune dreaming the Age of Aquarius into collective consciousness into the current transit in Pisces began during the last half of 2011, when many broke out of their "chrysalis" and transformed their lives and relationships. If you want to know what's coming for many years to come, take a look back at the intuitions and sense of belonging to a vaster interrelated whole you were shown in Spring and Summer of 2011. It may help to give a sense of our collective lesson in dissolving our separateness as we finish this transition through "the Winter of the 21st Century" on our way to Spring, beginning in 2025!

When it entered the second decan of Aquarius in 2007, Chiron began to approach its conjunction with Neptune. They stayed close in the third decan in 2008, and finally made their conjunction at 27 Aquarius in mid-2009, after which they both retrograded back, making another conjunction on the same degree in February 2010.

Chiron then briefly entered Pisces during the Spring and Summer of 2010, and both retrograded back into late Aquarius, with Neptune going direct at 26 Aquarius and Chiron at 27 Aquarius in November 2010. That set the themes for our collective healing until their next conjunction in 2094 at 5 Virgo. Chiron re-entered Pisces in early 2011 and stayed in that sign through early 2018, when it first entered Aries.

During the years Chiron was in Pisces, we were shown how to bless a lot and let it go, including dogmas and beliefs which kept us stuck in ambivalence or suffering. We healed by having compassion for ourselves and the suffering we share with the world. Now in Aries we heal by living in the NOW, embracing our new lives by identifying with a larger Life and collective work. It also “left tracks of mentoring” which have been guides for us as we move through the Neptune in Pisces fogs.

Chiron in late Pisces 2014-2018 heralded what will be “dreamed into collective consciousness” by Neptune these next 7 years as it transits the last half of Pisces. Chiron transits help each of us heal anew through our positioning within collective consciousness. When in Pisces, we were mentored in Piscean ways. When in Aries, we are finding ways to mentor and be mentored in Aries, healing into our higher Self by moving into direct action, securing our initial position in the new Life, leading to a vision of a larger role to play in the future as an inspiration to others.

Chiron was first was in early Aries between April and September 2018, and is now moving deeper into this first sign of the zodiac. This indicates our long term mentoring and/or healing into our Higher Self involves embracing all that is new, realizing we have a unique individual part to play in “the healing of humanity.” In 2018, it finished its task at “the end of the end” and began to mentor us at “the beginning of the beginning.”

With Chiron at the end of Pisces and beginning of Aries in 2018, we were in an important position in space-time where we have had to embrace compassion, forgiveness, and a vast understanding of ourselves as Spirits having human experiences. And to be human is to be flawed. Those flaws provide the spur for us to overcome them by transmuting them into strengths and skills which serve a higher purpose in our lives.

In 2018 and early 2019, we healed into our Higher Self by saying goodbye to some things and saying hello to others. As Jupiter and Uranus transited this span several times in 2010-2011, what was awakened then and since prepared us to be healed and/or mentored into our individuality. The vision or the new truth and future which led to a personal revolution then has been the source of us being mentored, or us mentoring others.

At this time Chiron is direct at 3 Aries. This is the same degree it went SRX in the Summer of 2018, giving us a threshold healing energy involving “identifying with a larger life” as we became some type of “exemplar” for others. This showed us the possibility of becoming a “source of inspiration” in our world. It went over this degree again in both the Spring and Autumn of 2019, and now makes its final pass over this degree.

Since July 2018, Chiron has now mentored us into “identifying with a larger life” as we became some type of “exemplar” for others, with the current transit giving us another look at what that has meant, and what it could mean in the future. Chiron has opened our ability to imagine forms of self-transcendence and new ways of expressing our individuality. These continue to dominate the landscape for the next two months.

We now are moving farther into Aries, and get to learn how to use those energies skillfully through 2026, when it enters Taurus and we move into the next Chironic era. For now, keep opening to which part of “primal selfhood” you are illuminating, remembering any “inner restlessness” shows the way into a new “uncontrolled interest in any given thing.”

It last went SRX at 6 Aries last Summer, and has been in its shadow zone ever since. That was our previous threshold of developing the early Aries “healing into our Higher Self” themes of Chiron in this sign. It most recently went SD at 2 Aries in December, giving us a platform of humor in cultivating objectivity. So we are now resuming our time of healing into a greater life awareness, retracing ground we’ve experienced for quite a while.

Neptune shows us how to merge the sacred and the everyday in our lives. We now have received a new inspiration, and begun a long term collective renewal. Neptune is now direct at 17 Pisces, the same degree as its retrograde station in June 2018. It was also here in March and October 2019, giving us several views of the theme of social-emotional rebirth and “participation in collective peak experiences.”

In 2019, Neptune began the year at 15 Pisces, and got to 19 Pisces where it went SRX in June. It then retrograded back to 16 Pisces in December, went direct, and now moves into a long term visit in the second half of Pisces. Neptune will enter 18 Pisces at the end of January, 19 Pisces at the end of February, and move into 20 Pisces just after the March Equinox. It then moves to 21 Pisces at the end of April, eventually going SRX on that degree in June. So May through September introduces us to the future themes of Neptune in 2021.

Because Neptune already entered the second half of Pisces, where it hasn’t been since 1855-58, it indicates that collective consciousness in 2018-2020 is in a zone filled with turmoil historically. Given Pluto is also in a zone where it last was in 1773-1774, it would seem a “pre-revolution” is in the air!

Remember too that numerous Solar Eclipses in Pisces are still in effect. We had Eclipses at 30, 19, and 9 Pisces, all of which also had Neptune in Pisces. These have had a profound effect on the field of the collective consciousness, as well as the collective unconscious. Given Neptune is the spiritual ruler of Pisces, it’s also been involved in the eclipses at Virgo 21 and 10 by opposition, creating a “Tension of Opposites” that profoundly impacted the collective spiritual field.

So Neptune is now “dreaming” into collective consciousness the same themes Chiron introduced to us between 2014 and 2016. As you can see, both Neptune and Chiron have been taking us into a far vaster collective healing and mentoring than we’ve known in many decades. Collectively, we’re now solidly in a newer spiritual realm, where our ego mind has been introduced to a deeper and vaster Soul realm and our testing has begun.