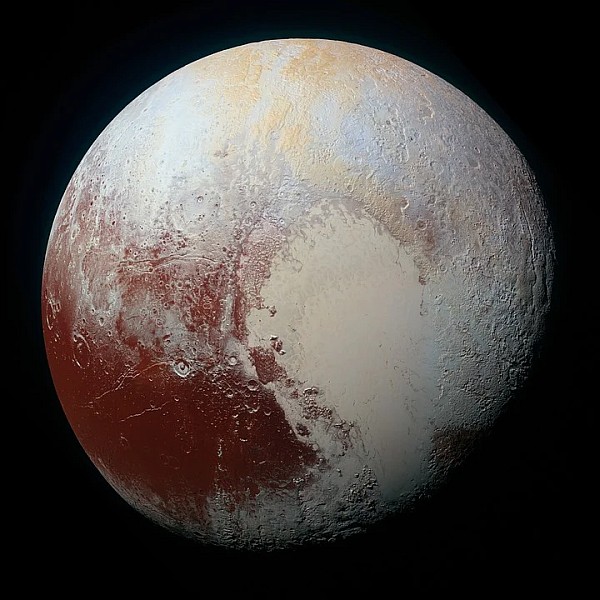 Pluto represents the Divine Power of ultimate regeneration, and is the Lord of the Underworld we all must pass through at least once in our life if we are to be a purified vessel and become authentic to our core. Right now it’s stationary retrograde at 27 Capricorn. What does this hold for us?

Pluto’s exact retrograde station occurs at 1:04 pm PDT, 9:04 pm BST on April 27. As is the case with all the outer planets when they turn stationary direct or retrograde, it marks a major “sea change” in those invisible Spiritual transpersonal energies. We are all about to have a different but familiar Plutonic experience where we are shown anew the part of Capricorn Pluto first traversed between late February and early July 2020, and then again from late December 2020 to now.

Since late December, Pluto moved from 25 Capricorn to 26 Capricorn. It now is going back over that span between now and early October, when it goes stationary direct at 25 Capricorn. After that it will be in its “shadow zone” through early February 2022, when it will again enter an unknown zone humanity has not experienced since 1776-1777. It would seem that revolutionary times are upon us over the next 7 years!

Pluto in the Power Zones

Between 2016-2018, Pluto transited the 5 degree “face” between 16-20 Capricorn where personal power gets translated into group energy through activities. In 2018-2019 Pluto transited the “face” between 21-25 Capricorn, where that power gets applied on the emotional or social level. Between 2021 and 2024, Pluto is transiting the face between 26-30 Capricorn, where that emotional or social power gets expressed in individual ways on the mental and spiritual levels of life. Pluto is done planting seeds in the first two zones, and has begun planting seeds in the third zone.

These zones were incredibly important in 2019-2020. Saturn occupied 21-25 Capricorn in Apr-May 2019 and Dec 2019-Jan 2020, after which it occupied 26-30 Capricorn in Feb-Mar 2020 and again from July through December 2020. During these times, Saturn gave structure and solidity to the Plutonic seeds already planted in those zones. Many long term seeds were “made real” when Saturn conjuncted Pluto at 23 Capricorn in January 2020, setting a 33 year cycle into motion.

Pluto is now in final few degrees of Capricorn in the Virgo decan, favoring efficiency, adaptability, and discernment as to how and where things fit into a sequence of tasks or a larger picture. This is the final transformation period of our late Capricorn sector as we prepare for Pluto’s initial entry into Aquarius just after the 2023 March Equinox! It will dance back into Capricorn in mid-June and remain there until late January 2024, when it re-enters Aquarius. As you can imagine, when Pluto is at 1 Aquarius, it will sprout all kinds of transformational energies related to the Grand Mutation of December 2020 at that same degree!

The Sabian Symbol for Pluto’s Station

This degree represents a “threshold state,” showing us the limit of our future as we now review the past. Pluto is stationary retrograde at 27 Capricorn.

The symbol for the 27th degree of Capricorn is "A mountain pilgrimage.” In the original notes from the Marc Jones class on the symbols published in The Astrology of Personality, Rudhyar says this is a degree of “necessary linkage of above and below in the seeker’s personal experience,” and “balanced dualism of subjective-objective life.”

In the Astrological Mandala he goes on to say this is a degree of "the ascent of the individualized consciousness to the highest realizations reached by the spiritual leaders of its culture,” where we find that our “peak experiences” often “depend to a very great extent upon following a path which many have trod before, under the inspiration of the great Teachers and Sages of our race.”

These “shrines” are “built by the unceasing dedication” of generations, where each “finds on their own mountaintop what … seems a unique and transcendent revelation.” He goes on that here “we witness the rise of the human consciousness,” where it is our “supreme task to rise like fire, impelled by a vision (we) share with our companions.” He says the keyword is upreaching, and that this degree falls in the Span of Dependence, and is the counterpoint degree in the individual, mental, and spiritual level of the Scene of Group Performance in the Act of Capitalization.

Dr. Jones, creator of the Sabian Symbols, says this is a degree of "a pyramiding reality” in terms of “inner or spiritual realization in a complete harmony of all the ideals and values ever developed” by humanity. He states “here is an indomitable integrity of human comprehension, and an intensification of every vision to which intelligence might aspire,” where we are “encouraged to hold unswervingly to the ultimate course” we choose to follow.

He offers us the keyword PERSEVERENCE. He says when positive, this degree is "a total reconciliation of mind and heart in an unquestioned devotion to some worthwhile task at hand.”

So this is a degree of finding profound core seed principles related to our path to Spiritual realization. Are you in harmony with the values and ideals of the realization you aspire to experience? Hold to your “indomitable integrity” and the spiritual course you have chosen that exemplifies an ideal you hold dear. You share this path with many; who are your Brothers and Sisters? Link “the above and the below” in your life, and you will begin to see your life take shape in the spiritual ideal you hold as your own in your heart.

With Pluto making this a hot spot, we must find the spiritual will and inner integrity which helps us honor the core principles we share with others across space and time. For the next few months, one of three things is happening; a) we’re looking back at the distant past when we linked with the World Soul and found other truth seekers there in a collective “peak experience”; b) we’re looking with new eyes at recent events requiring us to see our connection with Life on all levels, and especially our own “shrine of higher awareness”; or c) we can see how the “spiritual mountain” we’ve climbed is leading us to a greater connection with Self, with others, with the Earth, and with Truth.

Pluto, the Cosmic Purifier, will still be in Capricorn for several years. It continues to teach us deep lessons about practical, organized economy of energy and efficiency in sprouting seed forms of new "laws of our lives" we can relax into. Pluto has planted many seeds during the time it’s been in each segment of Capricorn, and as noted, these sprouted and took shape in 2018-2020 as first Saturn and then Jupiter transited those Plutonic spans. These activated into new processes and forms during Mars’ transit of Capricorn in early 2020 when it activated the first Jupiter conjunction with Pluto.

During the 2019-2020 transits of Jupiter, Saturn, and Pluto in late Capricorn we learned how to utilize those energies in organized ways. Of course, the three Jupiter conjunctions with Pluto (two at 25 Capricorn, one at 23 Capricorn) will be activated for many years to come, so there’s a lot to be learned about refining our senses, and becoming “psychologically enriched” by enjoying our play as we find a “transcendent security.

This is another extraordinarily dynamic Pluto retrograde period, given the aspects in play as this RX period begins. Dominating the front end of this retrograde station is Sun conjunct Uranus, with both biseptile Pluto, triggering the Grand Irrationality! And with the Sun still on its Wesak Festival Full Moon degree, this will be a Pluto retrograde filled with wisdom of “using knowledge and skill to meet the demands of a stage yet to come.”

Besides the Sun conjunct Uranus, Mars is also part of the mix, due to its triseptile to Pluto and septile to Uranus. This means three points of this “Seven Pointed Star of Destiny” is activated at this retrograde stations, indicating many months of radical shifts and irrational behaviors. Expect some strange events, reasoning, speeches, and thinking in coming weeks! You can find more in the articles every New and Full Moon.

Because of what’s been going on the past 5 years, it seems that the time when Pluto goes stationary retrograde and begins its review each year, humanity stands at critical forks in the road of its collective destiny. From here, we review the seeds we’ve already sensed related to connecting with other seekers for the highest, connecting in deeper ways with Nature and the World Soul, as well as ways to attain a “transcendent security” in relatively comfortable conditions. These will be front and center via the RX through October, and again in direct motion from October through early February 2021 before Pluto again moves into unknown zones.

Use your powers of precise focus to eliminate all which is frustrating your mature “economy of energy.” We’re now solidly in a long term chapter of using power wisely in group situations, and launched multiple cycles of a new era when Jupiter and Saturn conjuncted Pluto last year. We’ve now been through the first two “Great Compressions” in Capricorn in 2019-2020, and experience the third Great Compression, this time in Aquarius, in early 2021. While 2019 and 2020 launched multiple Capricorn cycles, 2020 and 2021 have launched phenomenally powerful Aquarian cycles which will blossom in 2021 and 2022. Be precise in how you use energy in your individual, mental, and spiritual realms, since it will serve you in power-oriented situations this year.

While Pluto does occasionally take us into the underworld of existence, it’s there where we look at our core, and purify all that is not Eternal. Pluto may accompany us through terrifying experiences, but it also is Lord of the Underworld, and so it is through Pluto that we become masters of fear, and it ceases to trouble us ever again. Welcome the depth experiences Pluto brings, since it is the Way to demonstrating your Spiritual Will which overcomes all lesser things.

We have 1546 guests and no members online