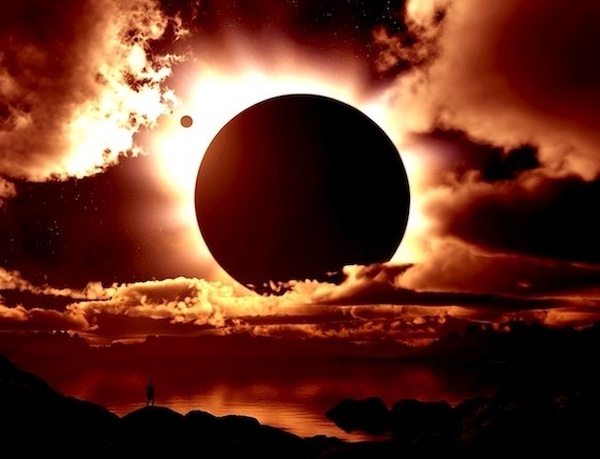 When two opposite points of view are expressed with equal intensity, the truth does not necessarily lie exactly halfway between them. It is possible for one side to be simply wrong. ~ Richard Dawkins

On December 3rd or 4th, depending on where you are in the world, we have a Total Solar Eclipse at 12º 16’ of Sagittarius (the New Moon perfects at 12º 22’ Sagittarius). This is the last of this series of Gemini/Sagittarius eclipses. Solar Eclipses can serve as turning points in our lives where people, circumstances and events can depart, and new ones can begin. Solar Eclipses occur at the New Moon, which are times of new beginnings. The difference being that with an eclipse those new beginnings can have much more far reaching effects. In fact they can be transformative.

When the Eclipses occur near the South Node of the eclipse axis, these new beginnings are often accompanied by some sort of ending. This is because this end of the axis is associated with the past, with what once was. So it is not unusual to experience loss in and around the eclipses. Or a sense of something fading away and departing or dissolving.

Sagittarius has an affinity with Courts of Law, Political, Religious and Social beliefs, and how these may impact our Freedom. The Solar Eclipse falls in the exact same degree as the United States ascendant degree of the chart I use for the country. It is always significant when an eclipse falls on such a sensitive point. And as I am writing this, an important case is being brought before the Supreme Court this week, concerning women’s rights to the availability to obtain abortions. The idea of opening up dialogues on subjects that are very much influenced by one’s religious and political beliefs can be very touchy. But it is precisely with the South Node in Sagittarius that we are being asked to have open dialogues, even with people that we strongly disagree with, and who have ideas that seem diametrically opposed to our own.

The Solar Eclipse is trine Chiron in Aries and sextile Saturn in Aquarius. There are opportunities here to affect a healing, to mend rifts and bridge the divides. Whether or not this will be successful is yet to be seen.

It is also important to pay attention to where the Eclipse will be visible. This particular eclipse is a swift one, only lasting a few minutes. And will only be seen in its entirety in Antarctica. It will also be seen as a partial eclipse in South Africa and Namibia, but it is in Antarctica that it will be casting its eye. Our continent at the bottom of the planet has been in the news recently due to its calving giant icebergs. But apart from the global significance of climate change, which will be even more significant with the Taurus/Scorpio eclipses coming up over the next few years, one wonders if there might be some sort of new discovery emerging from the continent at the far south? Perhaps something that will change our world view? May we all send light and love to our most southern continent.

Eclipses can be uncanny. They rearrange the pieces on the playing board, change the landscape, and can even leave vast holes in our lives at times. In our own lives this eclipse can do just that. There can be loss. But there can also be magical new beginnings. But even new beginnings can bring their own remorse for the past that once was.

The Nodes of the Moon are where the Sun, Moon and Earth will be in such perfect alignment, that it will allow either the Sun or the Moon to be eclipsed. The South Node represents the past, what is our old default, and what we are being asked to release. The North Node is what we are being asked to develop and cultivate. Both are for the sake of our own individual evolutionary growth, as well as the growth of humanity as a whole. In January the true Node will move back to the Taurus/Scorpio axis, while the mean Nodes will shift in December. But for the past 19 months the Nodes have been on the Gemini/Sagittarius axis.

What we have been needing to release through the South Node in Sagittarius:

What we were being asked to cultivate through the North Node in Gemini:

A Path to Inner Realization

We have 1339 guests and no members online