The Annular Solar Eclipse of December 2019 at 5 Capricorn Pt. 1 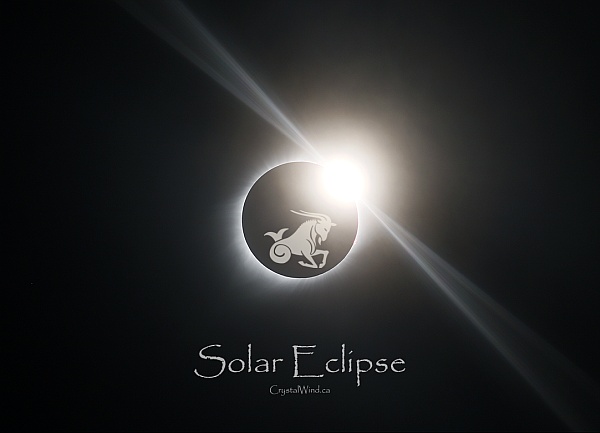 - Who Does It Affect and for How Long?

This Solar Eclipse will have a beneficial compression effect which allows specialized gifts and new life adventures to come forth. All eclipses shut something down, taking away elements of our lives no longer true for us. Over the next 5+ years we will go through endings while finding more appropriate ways to do our Being in the Capricorn arena of life. This Eclipse offers us mobilization toward a greater life with greater responsibilities!

Capricorn is the sign representing our ability to act in our “enlightened self-interest” based in our mature understanding of experience. Like Cancer, it is the Wisdom of our ancient primal Innocence, where we instinctively know how our roots have nourished our “flowering Self,” and how to understand the Wisdom needed in each moment to coax forth the best culmination of every life situation.

A Solar Eclipse in Capricorn takes away old duties and responsibilities, creating space for new ones; old limitations give way to new ways of projecting our personal authorship in public situations; old heaviness gives way to a new sense of “doing our Being” according to our Wisdom; old personality structures are replaced with new practical expressions of power and expertise.

So What’s Happening Where?

A solar eclipse occurs when the Moon passes between the Sun and Earth. The Moon blocks the light from the Sun and casts a shadow on Earth. In eclipse lore, where the Eclipse is visible will be where the greatest effects can be expected, lasting the number of years that the eclipse is long in hours.

The coming Annular Solar Eclipse happens at 9:13 pm PST on December 25, 5:13 am GMT on December 26. Because this Eclipse lasts 5 hours and 36 minutes from start to finish of the penumbral phase, it’s of fairly long duration, so will have an impact of 5 years and 7 months. It’s magnitude is relatively strong, and it will be visible in Saudi Arabia, India, southern Philippines, Sumatra, and Borneo. I’ve been using information from the NASA Solar Eclipse site for many years. In the past, they included a bunch of information about each eclipse, but now they’ve changed their site and it has much less scientific data about eclipses.

Because an Eclipse conjuncts the Moon’s Nodal axis, the nodes are very important guides showing the line of greatest development and showing what we know. The NN shows the line of development, so because it is in Cancer, the challenge is to grow into a greater caring or way of nurturing self and/or others. This is the Mother energy that cares for its young and those it holds close.

Embrace the past, as it shows you how you got here. Embrace yourself for those times you knew to take care of yourself and/or what you cared about. This North Node will further growth in all Cancer areas as it promotes growth to fill the voids left by previous Eclipses in Cancer and Capricorn. Grow toward a quest to understand life mysteries, and tune into the requirements of your new duties if offered a position of responsibility.

SN in Capricorn helps us eliminate old limitations and responsibilities, as well as obsolete rules and boundaries we no longer need. It can also give us opportunities to express the growing caring Cancer energy of the NN through forms of responsible demonstration of what we know. Whatever is cleared out via the Capricorn SN will over time attract new forms of Cancer expression and activities.

Look to the house where this Lunation falls to see what area of your life will be impacted, just as the houses where past Solar Eclipses fell have already been shutting down obsolete patterns since then. I gave you the positions and links to past eclipses in the previous eclipse article. And remember that whatever is taken away will create an attraction for something more appropriate to who you are now, and who you are becoming.

More On the Influence of Eclipses

Besides the factor of where the shadow falls, in Astrology Eclipses are said to be most powerful when they conjunct the Sun, Moon, Ascendant, or Midheaven of a birth chart. When this happens it always brings endings related to the planets and sectors involved, but these can be of great benefit in clearing away old life factors which have no place in our future. As you know if you’ve been here for any time at all, I believe that "something's lost and something's gained in living every day..."

Of course, besides these past echoes and the usual general effects, the Eclipse will also bring losses and endings where it falls in our individual birth charts. In an example I offered in the article explaining Solar Eclipses in general of how a loss can work to great benefit, if it conjuncts the Saturn in a birth chart, it can indicate the ending of old, lesser responsibilities, limitations, or fears, and open the being to a greater sense of purpose. If it conjuncts Jupiter, then it could show the ending of an old philosophy or belief system and open the gates to something far greater.

Given a Solar Eclipse is a New Moon, then like all Lunations that work their influence over time, it triggers events related to previous celestial events, and is triggered by subsequent transits to those points. For example, because of where the North Node is, we can assume this Eclipse at 5 Capricorn will have similar evolutionary energies as were present in April and May 2001, the last time the NN was in this part of Cancer.

This Eclipse, having no frictional aspects, will release powerful spiritual forces due to the numerous 9th harmonic aspects. With the Sun, Moon, and Jupiter all quintile Neptune, techniques to cultivate true intuition will yield fantastic results! Listen to your inner “Voice of the Silence” and you will understand many things about your place in the collective field.

With such a strong Saturn influence, while the atmosphere will be heavy and very serious, it also shows the path to the future through the mobilization begun at the Solstice. Remember that some endings are more a blessing than a problem. This Eclipse shows us how skillful we can be at navigating the “crowded house” of SEVEN planets in a span of only 41+ degrees!

We are headed for a much tighter compression of planets in the near future. This Eclipse will remove many old limitations, structures, and rules from our lives so we may accept a greater role in our world based in our understanding and how we’ve prepared these past 7 years. Finish whatever you need to before seeking entrance to the next stage of Life, while seeing the future patterns as they are “pre-formed” in the present.

While the North Node remains in Cancer, I regard these eclipses as productive for shutting down old Cancer/Capricorn things and attitudes we no longer need, with the void opening new compassion, caring, nurturing, and a sense of family. We demonstrate these through the house where we have late Capricorn.

Since the 2018 Cancer Eclipse, we’ve all expressed a dream offered to us since then, and should be finding ourselves at the end of the quest, one way or another. Keep accepting recognition for the excellence of your “performance,” but also understand that when it’s time to leave the stage and the lights come up, there’s nothing to do but get in the bus and move on to the next performance.

The 2019 Capricorn Eclipse at 16 Capricorn began to take away many old Capricorn parts of our life, giving us the chance to exercise different energies within group situations. The 2019 Cancer Eclipse has taken away many old habits and ways of life, helping us see the humor or irony in situations. We’ve all run into those who take themselves too seriously, and we will continue to “puncture ego pomposities” in the future to follow the growth path set out by the NN during those Eclipses.

In the next part of the series, we'll explore how this Eclipse will manifest and its astrological components, including Sabian Symbols, which signs will be most affected, and more on the mixed energies at work in this Annular Solar Eclipse. This one will put us “on the war path,” mobilizing our energies to move the group forward.

This puts the world at “the end of the end before the beginning,” building a groundswell of momentum which will yield a new life for everyone in 2020! This sets the tides of January into motion, with a major turning point to come in March marking the end of the old rules and the beginning of a new vision of the greatest good for the greatest number. Those who take responsibility as things transition will find themselves exactly where their expertise is needed.

See you soon with the next article on this Solar Eclipse!

Previous articles in this series:

What Is A Solar Eclipse and How Does it Affect our Life?

We have 725 guests and no members online