The Great Conjunction Of 2020 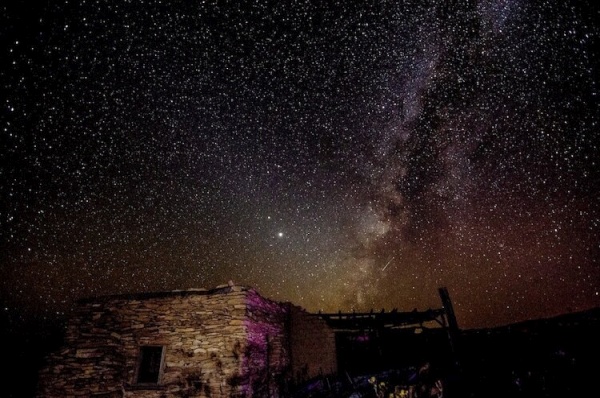 Hope is not blind optimism. It’s not ignoring the enormity of the task ahead or the roadblocks that stand in our path. It’s not sitting on the sidelines or shirking from a fight. Hope is that thing inside us that insists, despite all evidence to the contrary, that something better awaits us if we have the courage to reach for it, and to work for it, and to fight for it. Hope is the belief that destiny will not be written for us, but by us, by the men and women who are not content to settle for the world as it is, who have the courage to remake the world as it should be. ~ Barack Obama

When two planets are within close approximation to one another they are said to be in conjunction. In astrology we consider two planets in the same sign and degree to be conjunct. When referring to the  conjunction of the two giants of our Solar System, Jupiter and Saturn, astronomers call this a Great Conjunction. But not all conjunctions are created equal. Even though astrologers will consider two planets conjunct by degree and sign, they are not always in the same declination, and will still have some space between them when you gaze up at the sky. This conjunction of Jupiter and Saturn, however, is a conjunction for the books: so close you will not be able to tell where one begins and the other leaves off, creating this great and luminous addition in our evening sky.

Aquarius is also a sign of progressive societal changes, and with the Great Conjunction at the critical 0º of Aquarius, and falling on the Solstice, this is the sort of change whose time truly has come. I kept on hearing Barack Obama quotes in my head this week, and when I dug up his chart I was reminded not only that he has Aquarius Rising, but that he was born just months after the great conjunction in 1961. The conjunction of 1961 took place in Capricorn, but by the time our future president was born Jupiter had just entered Aquarius and was at 0º of Aquarius. The year he was elected the eclipses were in his signs: Leo and Aquarius; which buoyed him on the Neptune in Aquarius platform of Hope and Change. Now with the Great Conjunction in the first degree of Aquarius, we are being asked to make those wistful ideals a more pragmatic and closer reality. This is when we are being asked to fulfill that promise of “Yes We Can.”

Those born with planets and sensitive points in Aquarius will feel this surge of energy and the ballast of the responsibility that they bring.

The first growing pains are not going to be easy. They are going to be met with resistance with this series of Saturn/Uranus squares in 2021. But squares imply change. And they also imply that we, as a society, are ready for them.

The Great Conjunction of 2020 is about seeking understanding, and trying to find our way, our position, in these extraordinary, unpredictable and changeable times. Jupiter is our vision for the future, which in Aquarius can be about things like civil rights, innovative ideas and technology, global concerns, humanitarian concepts, and even systemic changes in government, politics and the economy. Jupiter brings us the vision, and Saturn shows us what is realistically achievable. Therefore Jupiter/Saturn is about setting goals, and having a plan and a strategy. Together this is a recipe for creating a sustainable plan for the future.

There may be a few twists and turns ahead with all of the squares with Uranus in 2021. But if we hold to our own convictions and plans, progress and success can be achieved.

This doesn’t mean it will be easy. Saturn never is, even with Jupiter trying to open doors for us, and inspire us with hope. But there is an implication here, that if we are willing to work really hard and make the effort, there will be rewards that could even exceed our expectations, and open up new avenues of growth.

In the mean time, we are all needing to watch out for a difficult square this week between Mars and Pluto which becomes exact on the 23rd. This will be particularly treacherous for our cardinal sign people (Aries, Cancer, Libra and Capricorn), but almost anyone could get caught in the cross hairs. Mars/Pluto is often connected with situations involving: force, power struggles, conflict, anger and even violence. This could even involve the feeling of having to fight for your life; or situations of danger. Associated with tyrants, bullies and ruthless aggression, it would probably be a good idea to lay low and avoid confrontations if it can at all be helped. What this week is good for: Anything that requires strength and willpower: rebuilding your strength, rehabilitation, or tackling a project that you’ve been avoiding because it just seemed too hard. Just don’t overdo it! Mars/Pluto can also be associated with exhaustion. Channeled wisely a great deal can get accomplished this week, provided you take all the cautions into consideration.

But the big story this week, is the Jupiter/Saturn conjunction in Aquarius, on the Solstice. Here’s more of what we can expect now that both Jupiter and Saturn will be in Aquarius:

Progressive enlightenment: What would a more enlightened, more ideal world look like for you? This may be different for people according to whatever ideals are in the forefronts of their minds. Nonetheless our ideals could be the catalyst for more progressive and humanitarian reforms in general.

Discovery and Invention: Innovative ideas. New scientific and technological breakthroughs. Concerns about ethics in the cyber world, social networks, the internet and how these impact the global community.

Freedom: Individualism. Evolving concerns about civil rights and equality for all individuals, where no one is to be left out. The time to reform outdated laws and systems that are no longer valid or appropriate.

Experimentation and exploration: Daring to go off road and even into outer space and beyond. Coming to recognize that we don’t always have to keep doing things the way we always have in the past, and that there might be better alternatives, that can make our lives a lot easier.

If there’s a child on the south side of Chicago who can’t read, that matters to me, even if it’s not my child. If there’s a senior citizen somewhere who can’t pay for their prescription, who has to choose between medicine and the rent, that makes my life poorer ~ even if it’s not my grandparent. If there’s an Arab-American or Mexican-American family being rounded up… without benefit of an attorney or due process, I know that that threatens my civil liberties. And I don’t have to be a woman to be concerned that the Supreme Court is trying to take away a woman’s right, because I know that my rights are next. It is that fundamental belief ~ I am my brother’s keeper, I am my sister’s keeper ~ that makes this country work. ~ Barack Obama