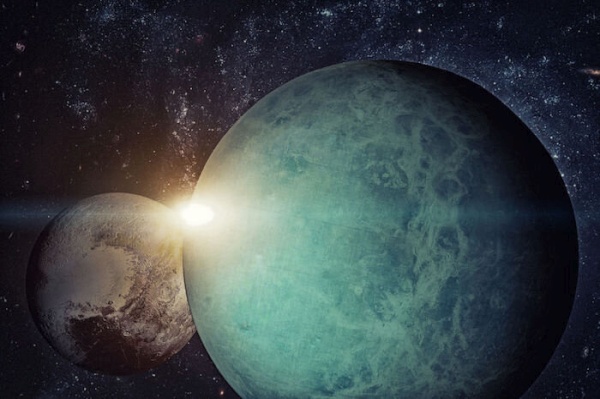 The significant fact is that all the really great changes have come from the inside out. They are born of the inner nature of the organism itself. They must have lain there, inherent as a possibility, more, as an irrepressible necessity, in the first Adamite organism, just as a tall pine is potential in a soft pinyon seed no larger than a child’s tooth. ~ Donald Culross Peattie

Next week Uranus will join the whole lot of outer planets, by entering its retrograde phase. Officially it will station on August 19th, but Uranus has been already stationed at this degree all week, and is one of those planets that can cause all sorts of mayhem and madness as it now digs into this 14-15th degree of the sign of Taurus. All the more so following the Leo New Moon which was squaring and shining a light on the god of insidious rebellion and abandon. Planets seem to be all that much stronger when they station at these points each year, stirring up trouble and destabilizing the status quo, and even the very earth herself.

What is revealed through Uranus can often come from left field, be surprising, enlightening, even shocking, and yet also be exciting all at the same time. Uranus wants us to grow, and to be willing to go beyond our usual conventional and sometimes self-limiting boundaries. Just enough to consider that there might be alternatives. And that we don’t necessarily have to keep doing things the way we always have in the past. We are always bound to some extent to our commitments, promises and conventions. But Uranus is now asking us all, in its own inimitable way, in our own lives: What if?

We do not reject our traditions, but we are willing to adapt to changing circumstances when change we must. We are willing to suffer the discomfort of change in order to achieve a better future. ~ Barbara Jordan

It is during these annual retrograde periods of Uranus, which this year is from August 19th thru January 18th, that we internalize the experience of Uranus within. This is when we allow ourselves to adapt to changes that have already occurred in our lives over the past year. We ask ourselves how we feel about those changes, and what, if anything, we might have done differently, or could have done better? If you are uncomfortable with certain changes that have been made, this is when you are more likely to pull back to your comfort zone.

And if you are planning to make certain changes in the future, or you know that there are going to be some changes at some point, the retrograde phase of Uranus is also a good time to accustom yourself to the idea, before you have to make or adjust to any external changes in your life. It’s like a preparation phase for the changes that are yet to come. It begins as an idea, and then you internally process it. You may even find that by the time you come to the end of the retrograde phase of Uranus, that you can almost anticipate with excitement whatever changes are forthcoming.

On the day of the Uranus station, Mercury and Mars, both in Virgo, will be making a supportive and creative trine to Uranus. This is likely to bring a courageous attitude and a willingness to try new methods and consider alternatives. These are transits of innovation and creative genius and action, that enable us to see solutions where previously we only saw problems or obstacles. This, along with the 8 month long series of “Uranian” New Moons, beginning with the New Moon in Leo on August 8th, are asking us to courageously grow back, not to what we were before (as we keep saying over and over again), but instead towards what we can become.

It is also when Uranus is retrograde that we get in touch with our own inner truth: that which helps us to connect to our own unique path. In order to make the most out of these 5 months, it is important to be mindful of, and remain faithful to our own authentic selves. This is what will help us to realize what that path is. This may not necessarily be what other people tell us is best for us. It may not even be what we used to always think it should be. But when we make this honest connection with ourselves, to what is truly our own, we will find it very difficult to deny or compromise who we are, ever again.