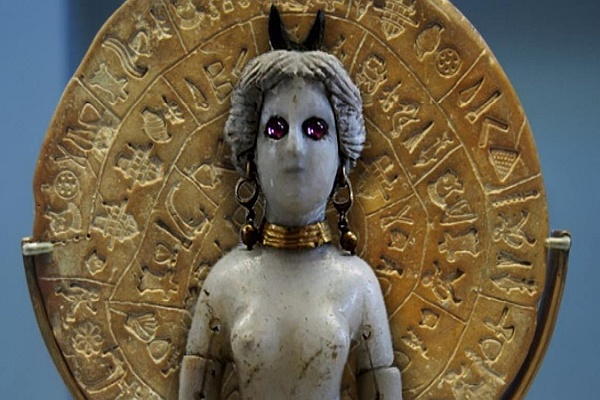 Before Aphrodite (and, in turn, the Roman counterpart) emerged from the collective consciousness of the ancient Greeks as a feminine archetype of beauty, pleasure and love, there were Astoreth, Ishtar and Inanna.

The Venus we have come to know through astrology and mythology was considerably syncretized with the Greek Aphrodite, whose cult and image were extensively influenced by her Near Eastern predecessors.  But while Aphrodite’s warrior goddess characterization is only apparent in the oldest strata of her worship, to the point that we no longer associate war and strife with neither her nor  the Roman Venus, instead delegating these aspects to Mars, the role of those ancient Near East goddesses as deities of war and sex was much more defined (and defining). Take Inanna,  for instance: in Sumer, she was originally regarded as a goddess of sex, war and justice, and these attributes survived when she came to be worshipped by Akkadians, Babylonians, and Assyrians as Ishtar. Too, Astoreth, or Astarte, was connected with sexuality, fertility and war, as she was specifically equated with Ishtar in many ancient texts.

As it turns out, Venus as an astrological archetype is much more complex and multi-faceted than we may assume; but then again, so are we. Seen in this perspective, the notion that Aries is the sign of Venus’ detriment takes on a whole other meaning: Venus in detriment might very well be an opportunity to rediscover and reclaim those parts of ourselves that have been suppressed and erased through centuries of social and cultural conditioning. Love. Self-love. Self-worth. Self-image. The alluring pull of pleasure, the contrast between social norms and our very own, personal idea(l) of human relatedness — whether it be platonic, polyamorous, monogamous, straight, queer.

When Venus enters Aries, on February 7, we will feel called to express all of the above in ways that are bolder and affirming, and there is hardly anything detrimental about that. Most of us would agree on the fact that the way we relate to one another is largely affected by our alignment, or lack thereof, with the values and desires that feel most genuine and authentic to us (which is different from saying that “if you don’t love yourself, you can’t possibly love/be loved by somebody else”, a statement that comes off as rather simplistic and vaguely ableist to those of us who don’t function in a standard neurotypical way).

Venus in her warrior armour reminds us that not only it’s ok to prioritize ourselves every once in a while — to cultivate the connection with ourselves, so that we can build more honest and transparent connections with one another. It’s more than that: it’s necessary.

When we acknowledge and validate the reality of who we are, in a non-judgmental way, we become able to show up as our raw and authentic selves for those with whom we seek to connect. We learn how to hold space for each and everyone’s unique needs and identities. We become capable of loving a little harder, and a little better — not to mention, to set appropriate boundaries when needed, without fearing the repercussions, or even to let go altogether.

Bottom line: warrior Venus is your friend. Honour her through honest self-examination and unapologetic being-ness. Ditch all stereotypes about who you ought to be, and take pride in who you are instead. She would approve.

If you want to know what it means for you when Venus enters Aries, you can purchase an individual Astrology reading. Tarot readings are also available!

If you enjoy my content and want to support me without paying for a full reading, you can buy me a coffee. Every small act of support counts, and I appreciate you all.

Cristina Zodiac Poetry
Hi! I'm Cristina and I've been blogging about Astrology and consulting with clients since 2013. To me, Astrology is personal, spiritual, political and magickal at once, and it should be used to uplift, empower and clarify. This is what I do with my clients.
Source Here
You can keep up with me on Facebook and Instagram, where I will post daily musings and detailed interpretations for the current aspects.

Anchor The Essence Of Your Soul

The Creator - What Are You Creating?

Support from your Fifth Dimensional SELF - The Arcturians Speak

We have 1409 guests and no members online