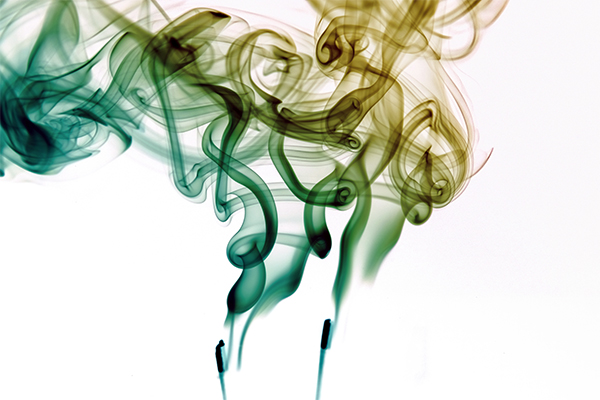 Mankind has used incense, in its earliest forms, since the dawn of human history. With the discovery of fire, our ancestors would have realized that most materials give off a unique and sometimes powerful aroma when burnt. The difference between the smell of a handful of Parsley and that of a Pine tree branch is greatly emphasized when each is burnt. Then as now, the air is quickly filled with intoxicating aromas simply by throwing some dried leaves, spices or twigs into a fire.

There is historic evidence in most cultures that our ancestors used incense burning for sacred and healing purposes. From ancient times people recognized that aromas produced by burning materials could heighten the senses, both sight and smell. When early man gathered around his fire, the smell of aromatic woods, herbs and leaves carried by heaven-wards spirals of smoke was a rare sensory pleasure. From this discovery it was no doubt a short step to dedicating fragrant products to the Gods, by adding them to a fire, which would also carry the good wishes and prayers of men upwards on the heat of the flames. Other benefits ascribed to the burning of incense included the purification of an area, to change a mood (to facilitate meditation or religious practices) and to cleanse and disinfect living spaces, especially after pollution caused by, for instance, death or illness. 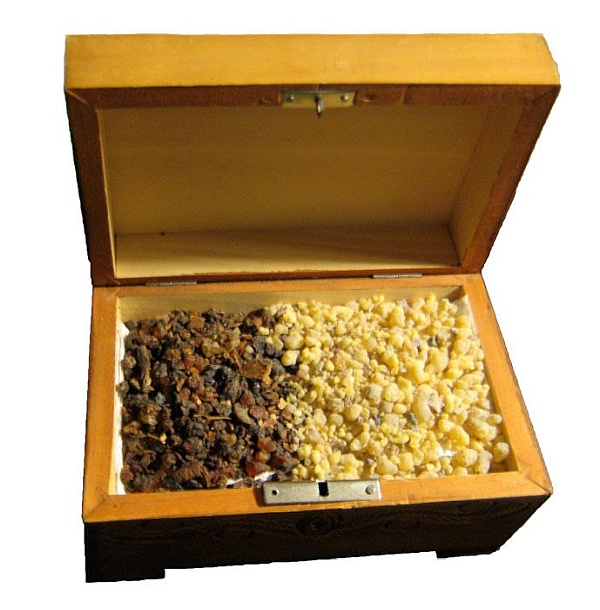 The Rise of Incense and The "Frankincense Trail"

Several thousands of years before the advent of Christianity, the plants, herbs and spices that produced the best incense were traded as highly desirable commodities. For many years Frankincense from the Arabian peninsula was actually a more valuable currency than gold or silver. In almost every religion, aromatic oils, leaves and powders were considered a gift from the Gods, symbolic of divine grace. Frankincense was used in vast quantities by the ancient Egyptians, Persians and Assyrians, and via them, by the Romans, who would have learned of its use when coming into contact with eastern nations.

The significance of the belief that the three wise men brought Gold, Frankincense and Myrrh to the infant Jesus was both the princely nature of the gifts and their symbolic significance. Frankincense was a costly gift literally "fit for a king," while Bitter Myrrh referred to the bittersweet fate awaiting the messiah.

The trade in Frankincense flourished for centuries, particularly in the Arabian peninsula area of Oman, and its use can be traced back to the reign of the Queen of Sheba, who reigned over the Hadramut Kingdom which included Oman. The Frankincense trade flourished for fifteen hundred years, peaking at the height of the Roman Empire. The trade only declined due to reduced demand after the fall of the Roman Empire and also because of the exorbitant taxes levied along the strictly controlled trade routes. 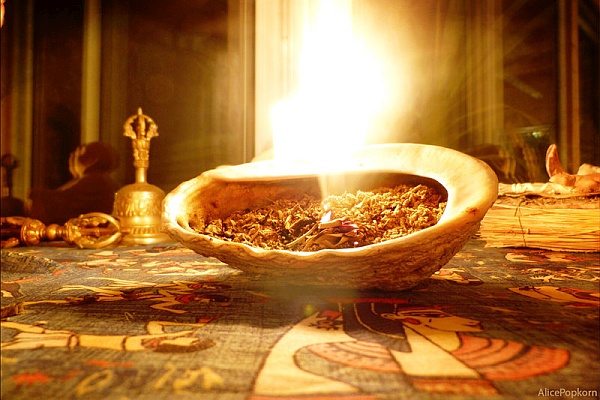 The Parallel History of Smudging

The idea of purification through smoke is certainly not the sole preserve of the world to the east of the Atlantic. The Native North Americans have also burned herbal smoke mixtures in ceremonial cleansing and healing rituals for thousands of years. Smudging (the common name given to the sacred smoke bowl blessing) has been a part of Native American tradition since ancient times.

As with its Eastern counterparts, the "smudging" or burning of herbs and resins was and continues to be a practice held literally sacred by many traditional cultures. Smudging takes many forms; herbs are either tied into bundles called "smudge sticks," or the longer, tendril like herbs may be braided into "ropes." Smudging calls on the spirits of sacred plants to drive away negative energies and restore balance. The most popular herbs and plants for smudging include Cedar, Sage, Sweetgrass and Tobacco. Each of these plants is imbued with a unique quality and specific energy and as such are known as "Sacred Plant Helpers." Their smoke is ceremonially fanned through the energy field (aura) to cleanse negative energies, heal, bless and attract positive forces.

Smudging continues to this day as an integral part of Native American purification rituals. All spaces and the tools used for healing must be smudged, and smudging is an integral part of other important ceremonies such as medicine wheel gatherings, the vision quest and sweat lodge. 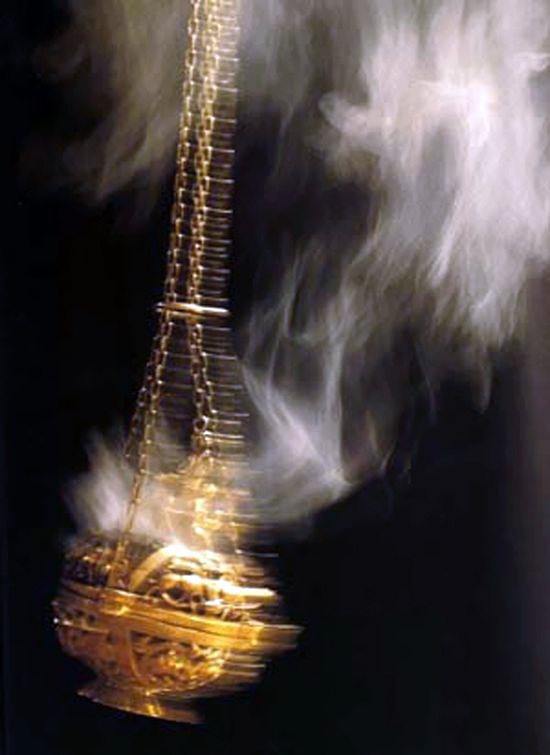 The use of incense in organized religion continues as a relevant and important aspect of several confirmed religions, being used to prepare the congregation for prayer and ritual. In the Roman Catholic and Eastern churches, incense is a sacramental, that is, "an action or object of ecclesiastical origin that serves to express or increase devotion" (Merriam Webster online dictionary).

The Roman Catholic Church has always recognized the value of rites and ceremonial observances, not only for increasing the solemnity of her services but for arousing a spirit of devotion in those who minister at them and those who attend them. For a period the use of incense was discontinued in the Western Church because of its close association with pagan worship, but it has always been used in the Eastern Church. The incense used today is powder or grains of resin or vegetable gums or other such substances which, when burned, give off a sweet smelling of smoke. It is interesting to note that the Roman Catholic church now shares a devotion to rituals involving incense with the increasing number of practicing pagans and wiccans, the very groups it sought to dissociate itself from.

The mystical meanings ascribed to incense by the church hardly differs from those of our ancestors. By its burning, incense symbolizes the zeal of the faithful, its sweet fragrance echoes the "odor of sanctity" believed to be exuded by saints and martyrs, and its rising smoke symbolizes the ascent of prayers to heaven. Also, incense creates a cloud, which is another symbol for godliness. 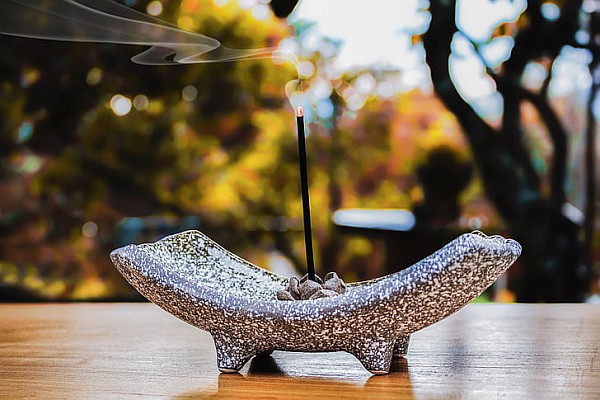 The Founder of Modern "Aromatherapy"

Incense has quite rightly been called the forefather of modern Aromatherapy, and its use as the earliest form of healing based on scent is undisputed. Today, there has been resurgence in the use of essential oils and the burning of incense as tools to employ the power of Aromatherapy, which is now recognized as being able, via the stimulation of the olfactory nerves, to produce physical, emotional and psychological effects independent of the thinking process.

As we smell scents, whether it be incense, fresh paint or sausage and mash(!), our mind is busy working on a subconscious level, deciding whether we like it and determining whether we recognize it. These responses are created in the limbic system, or more accurately, the information is sent via the nerves to the olfactory epithelium, which is part of the limbic system in the brain. Data is then transmitted to the conscious parts of the brain. The limbic system is the oldest and most primitive section of the brain. It stores information about every scent ever smelled, and provides responses and reactions to various stimuli. It is considered the seat of memory, and as such is a powerful mood effector.

All smell is molecular. In other words, when we smell a scent, we are registering a physical molecule that disconnects itself from its carrier and drifts in the air, arriving through the nose to the mucous membrane which has millions of odor-receptor cells and cilia to catch and identify scent molecules in the air. Unlike our other four senses, the nerve system for smell is directly exposed to its source of stimulation. This explains the immediate, unthinking effect of scents on the nervous system. Scent can cause an instant and overwhelming reaction, either pleasant or unpleasant, in a way that no other sensation can.

In addition, our ability to learn and our capacity for sympathy are also located in the limbic system, hence the often close link that feelings of sympathy and antipathy often have with smells. The limbic system is also responsible for creativity, inspiration, and all non-thinking, automatic life processes such as heartbeat, hormone regulation and respiration. Scent can affect all of of these powerful bodily processes.

The use of incense, and of essential oils in modern Aromatherapy, has validated the belief held by our ancient forefathers. Many of the reactions and decisions we make are intrinsically linked to our sense of smell, and many areas of our health and relaxation can be positively affected by smell, and by definition, through Aromatherapy. Incense can help to: 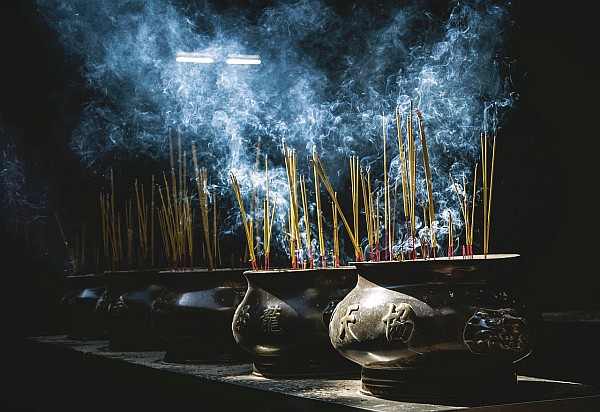 Follow the example of the ancients, and allow the fragrant smoke from incense to cleanse your living space, relax your body, calm your mind, create a spiritual atmosphere and heighten your awareness.

Margaret McGoverne is the founder of The Holistic Shop website, a new experience in online shopping for goods that promote a holistic approach to health, relaxation and spirituality. http://www.theholisticshop.com You can email her at